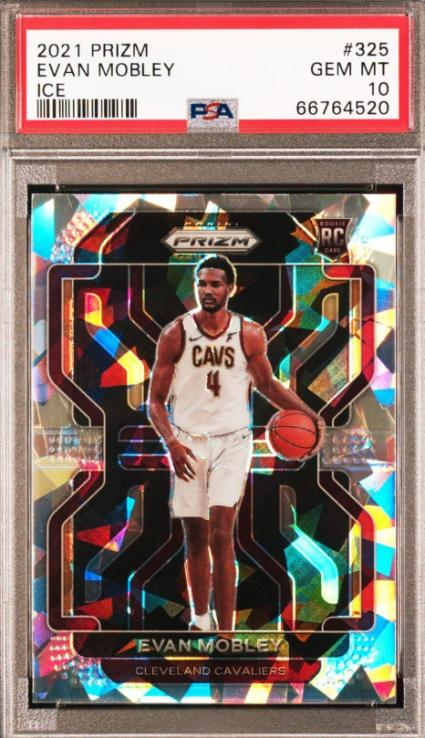 Don’t look now but there’s a new 7-foot monster in the NBA. One that has proven he’s more than worthy of that Rookie of the Year hype. And now that he’s shown he’s more than capable of wreaking havoc in the NBA, safe to say there is no shortage of Evan Mobley rookie card buyers. But what exactly is his TRUE potential? In addition to his incredible rookie campaign,  Mobley’s lone year at USC proved he was more than ready to play with the big boys. So let’s take a peek at the college season that got Mobley drafted number 3 overall by the Cavs in the 2021 NBA draft.

Will Evan Mobley or Cade Cunningham finish higher in Rookie of the Year voting?

Evan Mobley: Inside the College Numbers

Mobley has been called a 7-foot unicorn and when you take a closer look at what he did at USC it’s no wonder why. Sure, he had the typical big guy stats with plenty of points in the paint, more than 8 boards per game, and another 2.9 blocks. However, it was Mobley’s ability to play all over the floor that really caught the scouts’ attention. Regardless of where he was on the court. Mobley had no trouble making a play. Something that shows in his 30% behind the arc shooting percentage and 2.4 assists per game.

Now that we know how well this kind of ability translates to the NBA, the Cavs big man rookie will certainly be someone worth keeping a close eye on in the years to come. Whether you’re watching him on the court or watching for an opportunity to pick up a Evan Mobley rookie card. Speaking of those, let’s see what’s out there so far! 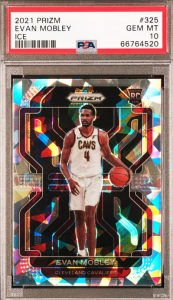 This should be your first stop when looking for the best Evan Mobley rookie cards. Not only do you get the quality that Prizm is world renown for, but you’ll also have a variety of options to choose from such as a solid set, rare Prizms, and must-own autographs. 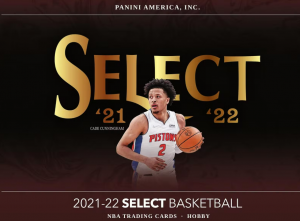 Just like Panini Prizm, Select offers just about anything you could want in a collection. High quality? Check. Rare cards? Check. High values? Yep, it’s got that too. While this is a slightly more limited collection than Prizm, card for card it could be even better. 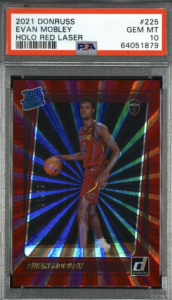 This year lives up to the solid reputation Donruss Optic Basketball has built over the years. The cards take a stylistic approach with the layout and come available in plenty of different rare Prizm varieties. Oh and don’t forget the shout out to the leagues rookies with the Rated Rookie line. In the card above Mobley is front and center showing off his 7 foot frame while casually dribbling the ball. In addition to the great Prizm options look for autographs and eye-popping inserts. 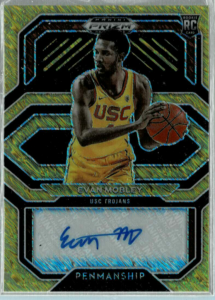 Those of you who have a hard time waiting for the regular Panini Prizm collection can take a bite of the Draft Picks line to hold you over. All in all it has pretty much all you want in a set of cards. Just like the regular Prizm, the Draft Picks set offers a high quality card with no only recent draft picks but some vets sprinkled in as well. The major difference? As you can see by the card above the players wear their college uniforms. That and the cost to buy one. Making it without a doubt one of the best Evan Mobley rookie cards on the wallet. 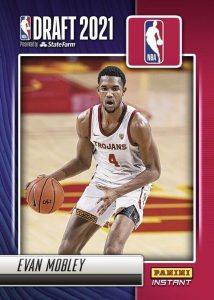 An Instant look into this year’s high-flying new talent, Panini comes to the table with its collection that’s known for getting the party started each year. As with just about every other Panini brand, Instant offers some great variety including some sweet inserts and even autographed editions. Hone in on this one if you’re interested in being one of the first collector’s to tap into the Evan Mobley rookie card market. 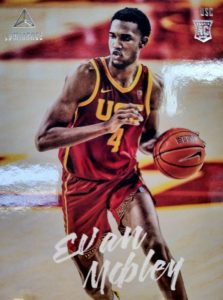 Panini Chronicles is now available and with it you’ll find an exciting array of the best Evan Mobley cards from a variety of Panini brands. Think of this collection as a Panini catch-all as it features a glimpse of what many of the new collections will have in store once they’re finally released. 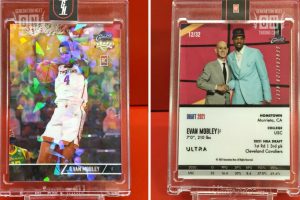 Generation Next is a somewhat obscure collection that does one thing very well. Being one of the first to market with the new season’s collection of cards. While these aren’t as valuable as Panini, you’ll get a lot of bang for your buck as even rare and autographed cards come cheap. Grab that low-hanging fruit while the getting is good! 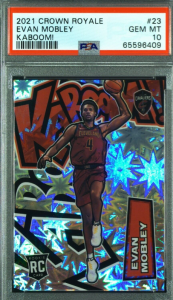 An amazing insert in the Panini Crown Royale collection featuring Mobley about to lift off. As you can see from the card above this is an eye-popping card with a design that screams BUY NOW. In addition to the wild design, this card brings a stunning visual of colors that are sure to catch the eye of any potential buyer. By the way, the card also has a limited print run and is known a Super Short Print or SSP. If you’re looking for more than just a casual investment look to empty the war chest on the KABOOM! insert.

These are your basic cards that make up the majority of each collection. Therefore they are not only the most common but also the least valuable. However, even some of the base cards from high end sets can be worth a decent amount of cash. Especially in mint condition.

These are limited versions of the base set that have a much shorter print run. Therefore, the cards can hold far greater values than the standard base set. You’ll often see them labeled as a certain color such as the Blue Prizm, Red Optic, Green Shimmer Prizm, etc.

These are where you’ll find the most valuable Evan Mobley rookie cards. For instance, even a base card with an autograph is a valuable collectors item. And if you happen to come across a parallel with an autograph? Watch out. Values truly soar.