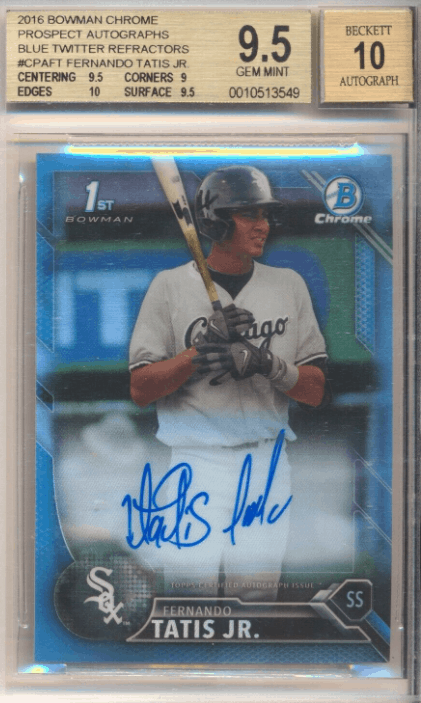 If you’re like many other collectors, you probably picked up a Fernando Tatis Jr. in hopes of another monster season. We don’t blame you. In 2020 Fernando Tatis Jr. showed the baseball world what he is capable of. Even with that horrendous September lull. Yes, we had every reason to believe that Tatis was on his way to another run at that MVP that slipped through his fingers last season.

And as far as this year goes, Tatis is right back in the driver’s seat with an absurd 27 home runs in only 256 at-bats and a league-leading 19 bags. Those 27 home runs lead the league too, by the way. And so does his other-worldly .680 slug and 1.058 OPS. All this despite being diagnosed with a labrum tear after collapsing to the ground in the middle of an at-bat in April. Although multiple doctors have advised that he can’t make it any worse by continuing to play baseball, this is something that certainly had us worried. But then Tatis Jr. came back from that and almost immediately started going yard in every game so it appears our fretting was a bit unwarranted.

So if you’re a collector or investor who took advantage of the injury drama and found a good buy-low opportunity, congrats! It seems your shrewd and calculating move is paying off nicely. Here are some Fernando Tatis Jr. rookie card options for all the rest of you who still haven’t added one to your collection.

Another up-and-coming player that can make an INSTANT impact in the majors…..

Check out what Jarred Kelenic rookie cards are out there so far. 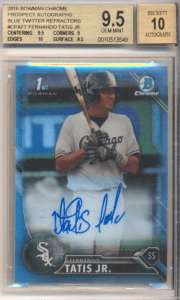 For someone who’s capable of leading the majors in virtually every offensive category, Tatis sure looks nonchalant. Maybe that’s the secret to his success. Cool on the outside but ready to unleash chaos under that smooth exterior. At any rate, this is his flagship rookie card and you’re gonna have to buck up if you want one of the rarer refractors. For instance, the Green Refractor Auto recently sold on eBay for more than $20,000! Not that extreme? Find a base card auto or a more common refractor without Tatis’s signature. 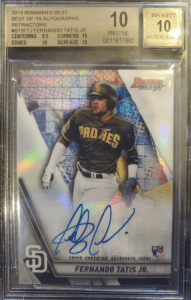 We’ll round out the top 5 with another prospect card. Of course, it’s from Bowman! This one comes from the Bowman’s Best set. The card features a triumphant Tatis Jr. as he appears to circle the bases in a homerun trot. Hopefully, the one featured on this card wasn’t as controversial as this homerun he smacked on a 3-0 count against the Rangers! 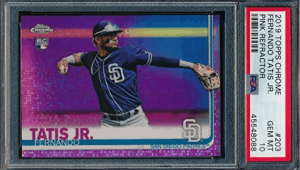 Now we move onto the best prospect Fernando Tatis Jr. rookie card options to the best “true rookie card” options. In other words, the cards that were made for his rookie year of 2019. Whether it’s the base card or one of the various parallels, a Topps Chrome Fernando Tatis Jr. rookie card is a vital collector’s piece. As far as value goes, seek out the Sapphire if you’re looking to spend BIG. Like $10,000 plus big. However, if you’re looking to get in at a more moderate price point you should be able to find many less pricey options as well. 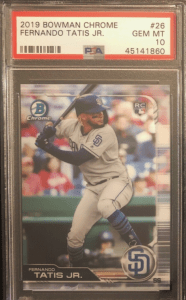 Another true rookie card, this one from Bowman. The card features Tatis’ mid-leg kick and is available with an autograph and comes in a variety of refractor styles. It doesn’t command the value or the attention of the prospect card from 2016 but it’s a fine item nonetheless. 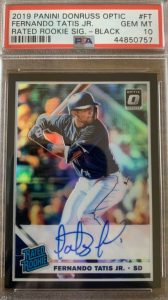 Donruss just doesn’t quite get the attention it deserves! Especially for a brand that has been on the baseball card scene for decades. And at one time was much more respected than the irreproachable Bowman of today’s baseball card world.

At any rate, this Fernando Tatis Jr. rookie card is a low to great moderate range investment depending on which card you go for. Plenty of incredible investment options in that $500-$1,000 range. 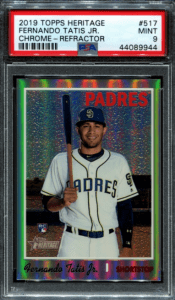 Always fun to see an electrifying young talent like Tatis on a throwback card. Gotta love the contrast! Fernando is looking straight into the camera with a smile that just screams “y’all have no idea what’s coming”. Look for the one signed in red ink if you’re breaking out big bucks. Less than $100 to spend? A high-grade base card has your name all over it. 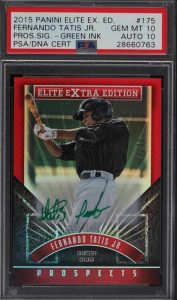 We don’t usually include Panini cards on our baseball content but we gotta hand it to them on this. While Panini doesn’t have the licensing to compete with Topps and Bowman, what they do have is the drive to be first to the market. For example, this is the oldest card on our list as it dates all the way back to 2015 and believe it or not, it can bring in some big-time values as the Green Ink autograph card has sold for nearly $10,000. Of course, there are far more affordable cards from this set so pick a price range and see what you can find. 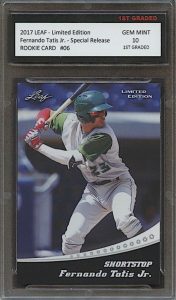 Like Panini, Leaf doesn’t have an MLB license so you typically won’t see through the roof values. However, if you’re looking for something under $50 one of the many Fernando Tatis Jr. rookie card options from Leaf could be your answer. We prefer the 2017 Leaf Limited shown above. While it may not be the most valuable, it sure does have the most INTENSE-looking Tatis on the front. Locked in and ready to crush the incoming baseball into another orbit. Watch out Proxima Centauri!

Here’s a guy who Tatis Jr. will be battling for a long time to come!

Some Juan Soto rookie cards for your viewing pleasure.

What we said when we heard about the shoulder tear:

“Right now a short-term investment doesn’t sound nearly as it did before the injury. Pay close attention to what Tatis does at the plate once he returns to action. Does he immediately start raking? If so, we couldn’t blame you for feeling confident in short-term investment. However, if he doesn’t look like the same batter we’d be very hesitant to buy a Fernando Tatis Jr. rookie card if you need to unload it in less than 1 year.”

Well, he immediately started raking. Now it doesn’t mean the issue can’t come back, but for now, it appears something Tatis Jr. has no problem playing through. We still prefer a medium-term approach here but the bounce back certainly brightens our short-term outlook. 9/10

What we heard about the shoulder tear:

“The shoulder injury is WAY less of a concern if you’re planning on holding on to your card for a few years. Surgery or not, we’d expect Tatis to be back and crushing home runs at some point in the not-so-distant future.”

We’re sticking by this line of reasoning and the fact the Tatis Jr. has shown his ability to bounce back just reinforces our bullish medium-term sentiment. That shoulder could rear its ugly head at any time but if you have a 3-year outlook it doesn’t matter. He’ll be back and crushing home runs before you know it. 10/10

What we said before AND after the injury:

“Very rarely do we consider a long-term approach to a player this early in his career. However, Tatis Jr. appears to be a generational talent. Just imagine if you would have stashed a Mike Trout rookie card away early on. By no means will we shy away from some profit-taking when it’s presented. But, at the same time, putting at least one of the more valuable Fernando Tatis Jr. rookie cards away in a safe place and forgetting it exists for a while seems like a good idea. Go find it in 10 years and you could be in for a shock”.

That’s the beauty of going long, a little injury here or there isn’t going to hurt the big picture. 10/10