Search for the funniest baseball cards of all time on eBay! 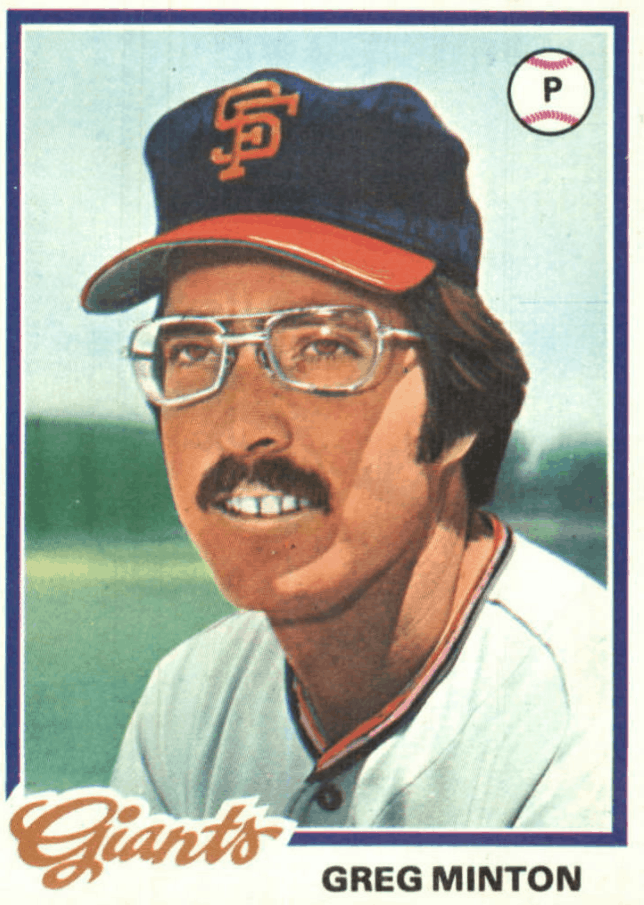 Sometimes we all need a break from the never-ending cycle of chasing profits and investing in cards with no personal meaning. Other than the dollar signs they create in our unsatiable eyeballs, that is. By no means should we take such a sabbatical often, but every once in a while it’s nice to appreciate the things in life that make us smile. And we don’t mean the smile you get from flipping a Tom Brady card the day after he wins his sixth Super Bowl. We’re talking about the smile that’s generated only by the truly absurd. So without further ado, let’s take a minute to have a laugh at the FUNNIEST BASEBALL CARDS OF ALL TIME!

The Funniest Baseball Cards of All Time 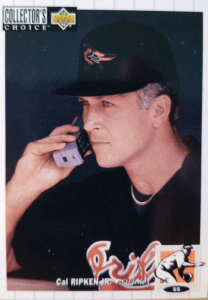 Here we see Cal attempting his best Zack Morris impression from the comfort of the dugout. So many questions to be asked. First, this came before he broke Gehrig’s consecutive games record. One would think he’d be more concerned about getting out onto the field than ordering Papa Johns for a pre-game appetizer. Or was it a casual call to a friend? By the wild look in his eyes it seems there’s NOTHING casual about that phone call. So many questions that seemingly have no answers. Certainly no logical ones. 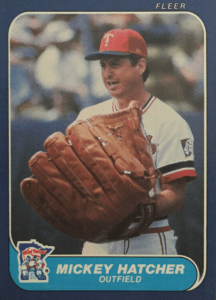 Although not as subtle as the last card, this 1986 Fleer featuring Micky Hatcher would make Frank Drebin proud. Anyone who says slapstick doesn’t have a place in comedy should take a step back and appreciate this card. Then you’ll finally get it. Too bad he wasn’t a pitcher because he could have hidden a lot of Vaseline and/or Crisco in that glove. Then he would have made both Frank Drebin AND Eddie Haris proud. 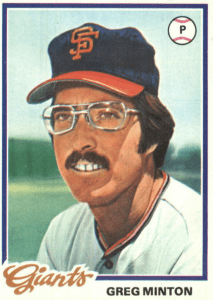 Ok we know he’s a professional baseball player and all, but something tells us that unlikeLudacris and Jose Canseco, Greg Minton did NOT have girlfriends in different area codes. What else is there to say about this card? We’re at a loss and just let Greg’s blue steel stare do the talking for us. 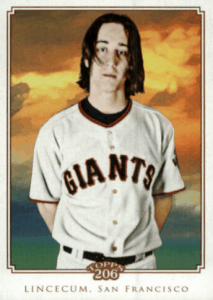 LOOOOOOOOOOOOOL. Okay, where to start. Perhaps, the funniest thing about this card is that it appears Tim is actually TRYING to look cool. However, the end result is a poor man’s Keanu Reeves from Bill and Ted. Or Count Dracula. Either way, Tim makes Greg Minton above look like a major player on the scene in comparison. An almost impossible feat. Nice work, Tim. 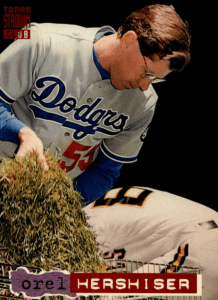 There’s an old joke around here that goes something like “Orel Hershiser is about as bland as a boiled chicken breast”. Well, at least he can’t be described as bland in this card. From the best we can tell he’s helping Oscar the Grouch off the side of the road after he has had one too many 40s. Perhaps, funny should not be the adjective here. Just sad. Here’s to better days Oscar. 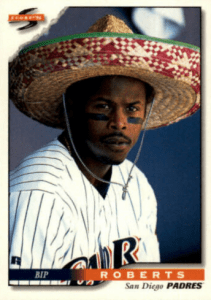 This should be Greg Minton’s wingman at the bar. Now don’t take it the wrong way, Bip looks like a cool enough guy and all, but it appears happy hour might’ve started a little early for him in this one. Every bachelorette’s dream: a guy who looks like he’s straight out of a cliche 70’s portrait and a sidekick who’s 12 shots deep on Jose Cuervo.

Clearly, you’re not going to be making much money off these cards. And as we said earlier, that’s not the point. So if you’re thinking about going short, ask yourself this: Will all of my bros get to see this sweet collection in less than a year’s time? We don’t like those odds. 0/10

While slightly better than a short term approach, this isn’t going to cut it either. Sure you might have a few laughs over the years but just imagine the void in your life after you sell. Something tells us that would lead to some VERY dark days. If not years. Avoid this tragic fate and hold for the long term. 1/10

Imagine all the poker games, back yard BBQs, and holiday parties sitting around with your family and friends laughing until you’re in tears. Or think about how easily you’d be able to play a room with these beauties to lean on (think Lloyd Christmas from Dumb and Dumber). Yep, those are the moments you’ll be missing out on if you sell these cards. You’re welcome. 10/10

Now that that’s over, back to business! Check out our updated Lamar Jackson rookie card investment guide.