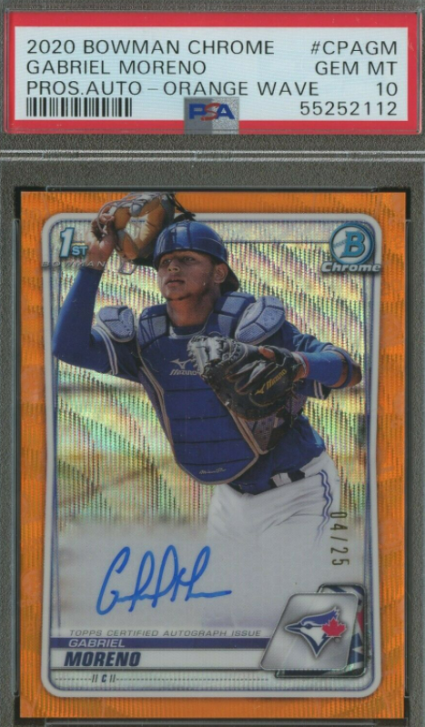 Any catcher that knows how to use the lumber is bound to attract the attention of the card collecting community. Especially when that catcher is a potential 2022 call up candidate. Therefore we’re about to take a quick look at what Gabriel Moreno rookie card options are out there so far.

But before we get into all that, we should probably address a question that many of you have right now. Who on earth is Gabriel Moreno?? While the kid may be on the radar of some, he hasn’t been the most hyped prospect. Until the 2021 season, that is. After a few decent years in the low minors, Moreno quickly ran through both A and AA on his way all the way to AAA last season. While the season was eventually cut short by injury, Gabriel’s year end triple slash of .367/.434/.626 certainly shows why many scouts, collector’s, and dynasty league fantasy owners are excited about his future. So before that inevitable big league call up happens, it’d be wise to consider picking up at least one of the following Gabriel Moreno rookie cards!

Check out these MUST OWN Adley Rutschman rookie cards! 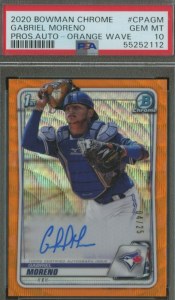 Boy it’d be a nice to own the card above. A PSA 10 Orange Wave refractor featuring one of the games most promising young back stops. Did we mention it has an autograph?? The only problem with the dream of owning one of these (besides the fact that there are only 25 in existence) is it’s price tag. We know what you’re thinking: an obscure catcher that caught a bit of attention last year can’t command TOO many dollars, can he? Yes he most certainly can. The last time the card sold it went for just over $4,000. Gulp. A steep price to pay but Moreno could prove well worth it.

Don’t have that kinda loot? No worries! There are some far more affordable options in this collection so pick something in you’re price range and have at it. Casual investors think non-autographed base cards or the more common refractors. 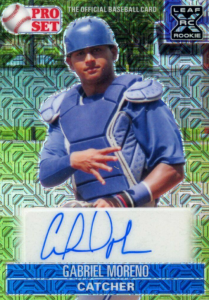 We go from the most valuable collection to one that pretty much EVERY collector can afford to take a dive into. Pro Set was recently revamped by Leaf and it has quickly become a decent little set for those who only have a few bucks to play with. For instance, the card shown here has a print run of just 25 and comes with Moreno’s autograph. Just like the card above! The price difference? Only about $3,700! A go to Gabriel Moreno rookie card if you want the ink without the crazy prices. 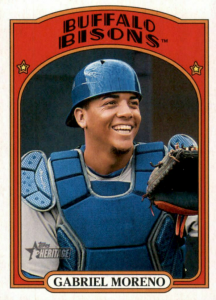 Now here’s a simplistic rookie card that traditional collector’s are sure to love. Nothing fancy, just a picture of Moreno and he smiles for the camera. And likely thinks about all the dollars he’s gonna make once he clocks some service time under the new MLB bargaining agreement. Anyways, pricewise this should be easy enough to afford even for the rarer parallels. A solid card from a truly solid collection. 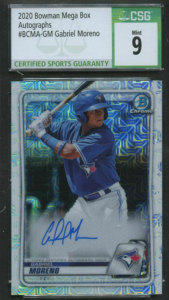 While not as sought after as the regular set, Bowman Mega Box offers a Gabriel Moreno rookie card that you can really sink your teeth into. Unlike the first card we covered, this one shows Gabriel at the plate. As in the place where he’s gonna make the BIG money if his bat ends up being just as lively in the big leagues. As you can see the card comes available with an autograph and in a variety of different refractors. A great moderate investment for anyone who wants a Bowman Chrome but doesn’t want to pay the prices that some of the cards from the regular set command.