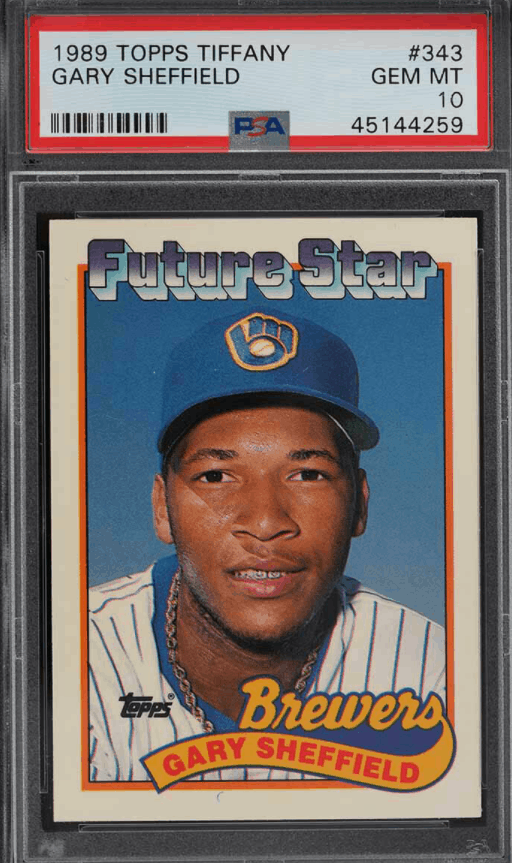 Looking for a Gary Sheffield rookie card? Good idea. He was a nine-time All-Star, a World Series champion, five-time Silver Slugger Award winner, 1992 NL Batting Champion, and the owner of one of the most unique stances in all of Major League Baseball History. And while he was one of the most feared hitters of his generation, the prices of the various Gary Sheffield rookie card options are nothing to fear at all. Why? They came out of the Junk Wax Era, of course. We’re about to go over what cards are available, but first, let’s find out more about why Sheffield was one of the most feared hitters the game has ever seen.

Sheffield played for eight different Major League Baseball franchises in a career that spanned from 1988 to 2009. Touching three different decades in his career, Sheffield became one of the game’s most popular and respected players. Sheffield could hit for power, average, run well, and was a fantastic defensive player winning Gold Glove awards at both third base and outfield.  Not an easy feat.

Sheffield began his career with the Brewers and spent his first three years in Milwaukee. After that, he was traded to the San Diego Padres where he and the “Crime Dog” Fred McGriff made for a lethal 1-2 punch in the middle of the order. But it wasn’t until his next stop where Sheffield cemented his legacy with a World Series in Flordia. Soon after winning his first World Series Sheffield was traded to the Los Angeles Dodgers and was an automatic star there too. Which wasn’t easy to do seeing as he was traded for catching legend for Mike Piazza.

Sheffield enjoyed the Dodger days but was ultimately traded to the Braves and then signed a massive three-year, $39 million contract with the New York Yankees in 2003. After the Yankees, he played for the Tigers and the Mets and became the 25th player in Major League Baseball history to hit 500 home runs. Sheffield is a baseball great and a guy whose rookie card should be in your collection. Let’s take a look at some of the cards you’ll want to consider adding to the ole’ collection.

Random thought of the day:  Shouldn’t a .292 career average and more than 500 home runs get you in the Hall of Fame?  Voters haven’t been kind to Sheffield so far, but it appears they may be coming around.  Always next year! 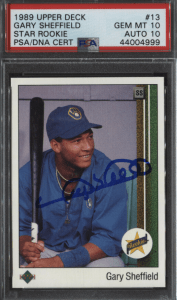 This is a classic card that features a calm, almost jovial Sheffield with a batting jacket, double gold chains, and a bat hanging on his shoulder. BALLER. While not as famous as some of the other cards in this set, it’s still a giant in its own right. As far as value goes, this is the top option with PSA 10’s going for over $300. 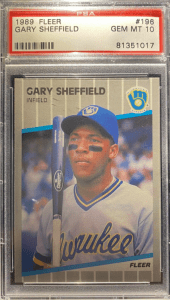 The card features Sheffield in that retro Brewers jersey with some paint below the eyes and a bat on his shoulder. Yep, someone is ready to play hardball. Fleer was able to capture the intimidating look that Sheffield gave out on the field. Basically, the card pretty much sums up his playing career, tough and powerful. 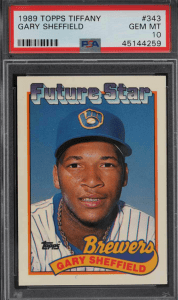 If the value is your number one objective, this is one of the best Gary Sheffield rookie cards to own. An upgraded and much less common version of the original Topps, the Tiffany version will run you around $200 in perfect condition. As far as the less important details go, the card predicted Sheffield’s career in Major League Baseball pretty well, calling him a “Future Star” with that banner over the top in retro gaming letters. 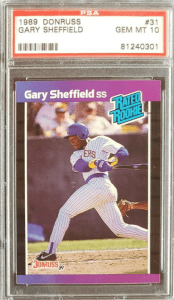 One of the most iconic Donruss “Rated Rookie” sets of all time. This is a card that features Sheffield labeled as a shortstop, a position he did not play often in the Major Leagues but was fantastic at coming out of high school. Add that crushing swing and you’ve got yourself a card that is nothing short of ELECTRIFYING. So if you need to burn a few bucks, there’s plenty of worse ways to spend it. 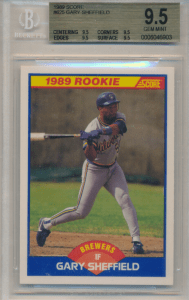 This card from Score is one of the lesser remembered Gary Sheffield rookie cards. Just Gary doing his thing, trying to put some wood on the ball. On second thought, is that a warm-up swing?  Either way, a card that won’t cost you much to get your hands on. Although if we’re going to go with a value play the Donruss Rated Rookie shown above has our vote. Hands down. 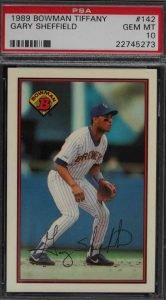 If you’re a modern-day baseball card collector, you know how far Bowman has come since the late ’80s. Now one of the most sought after brands on the planet, that wasn’t exactly the case when this Gary Sheffield rookie card was released. However, the “Tiffany” factor always plays a role in card value and it’s no different here. This one holds a similar value to the Topps Tiffany of around $200 for a PSA 10.

As we spoke about earlier, just like the Ken Griffey Jr. rookie cards, Gary Sheffield’s rookie cards victims of the infamous Junk Wax Era. While this tends to drive down value, look on the bright side, the cards are much more affordable.

So while you will never make a fortune collecting these, true Sheffield fans can pick up all of their favorite player’s first-year cards ON THE CHEAP. Who knows, maybe one day the Junk Wax cards will become a cherished collector’s item. Nothing wrong with wishful thinking. But even if they don’t, your collection of Gary Sheffield rookie cards will be one to one of the most under-appreciated players to ever play.

One last thing to factor in here is a potential Hall of Fame induction. As noted earlier, Sheffield appears to be gaining a little traction on his quest for The Hall. If he continues to draw more votes each year and eventually gets in, expect a nice little pop in your Gary Sheffield rookie card collection’s value!