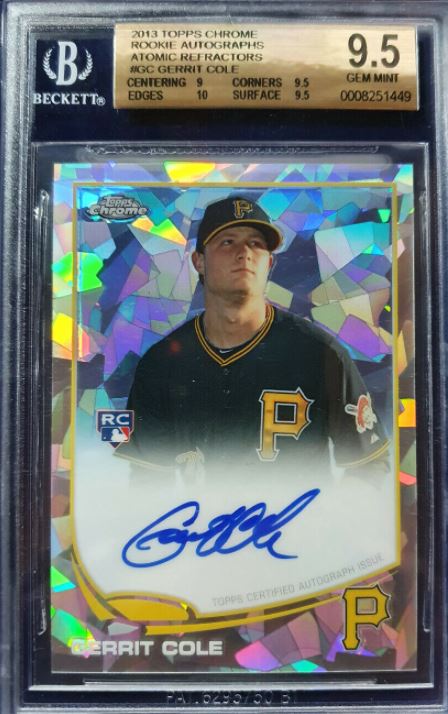 If it suddenly dawned on you that a Gerrit Cole rookie card investment might be a good idea, better late than never! Gerrit Cole is arguably one of the most popular pitchers in the entire league. Especially now that he’s in New York. Another thing that helps is the fact that he’s also one of the best in the league as well. However, it took him a while to reach this level of stardom as he didn’t always play in the Big Apple. You may know him better from his time on the Houston Astros, but even before that he played for the Pittsburgh Pirates. In addition to being in smaller markets, another factor that played in Cole being overlooked was that he wasn’t always the strikeout artist we know today. And while the obvious talent was there, the Pirates weren’t able to pay him the big-time money (typical for the Pirates) and we’re able to fully realize his tantalizing abilities.

Anyways, let’s look at the numbers that make him such a great pitcher. Cole has won more than ten games six out of his eight seasons in the league while managing an ERA under three for four out of his eight seasons. And the last 4 seasons specifically he’s kept his ERA under 3 with a k per 9 rate that is has reached the absurd level of 14. With a start to a career like this, he’s likely on his way to the Hall of Fame. If he keeps it up, that is. No matter which way you cut it, it is safe to say that these Garret Cole rookie cards will only become more valuable over time. Now let’s take a look at what we’re working with!

This guy may be another Gerrit Cole in the making….

Time to take a look at some Dinelson Lamet rookie card options! 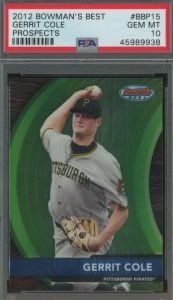 Now you will notice most of these names are similar as Bowman tends to have a stranglehold on prospects. As for the first card on the list, it is by far the most affordable. Surprisingly enough, it’s also one of the most difficult Gerrit Cole rookie cards to find, making it even more special. The set also includes autographed cards, so you should certainly look out for those during your search. If you happen to find one you’ll likely be able to bring it in for less than $100. Now we’re talking! 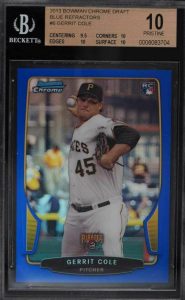 Okay, now we start to climb into the higher-end cards as we move to Bowman Chrome. While you won’t find many in this set with an autograph, there are plenty of different refractors that fall in that moderate range of around $500. Either way, the picture includes Gerrit Cole winding up for a pitch donning his 45 home Pirates jersey. He’s got a few extra pounds on him but still ready to bring the heat as always. 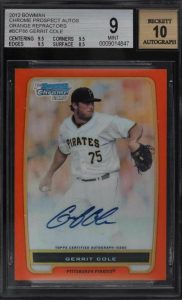 Now moving on to the next Bowman card on the list, we find Cole’s FIRST EVER Bowman. Meaning this is the one to target if you’re looking to make a big splash. Like a full-on cannon ball-sized splash. Anyways, Gerrit Cole didn’t make his rookie debut until the following year, making this one a prospect card. This adds value because it’s one of the first official baseball cards you’ll see with Cole’s photo on it. As you may have noticed, the card above includes Gerrit’s autograph and that’s exactly what you’ll need to find if you want to go “all in” on your investment. Some of the highest grade rare refractors are approaching $2,000. 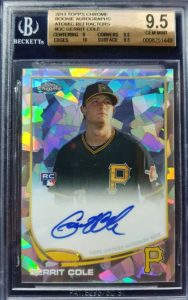 Alright, let’s get Topps in the mix. And what a way to bring in the biggest name in baseball cards of all time! While not quite as valuable as the 2012 Bowman Gerrit Cole rookie card options, this one is a TRUE rookie card with the RC logo floating around halfway up the paint. Autographs are available and so are refractor varieties. Higher-end cards will easily set you back more than $500. A number that may be chump change years from now as Cole continues to build his Hall of Fame resume.

He’s pitching lights out once again and there are few that can contend with Cole for a run at the AL Cy Young. If he manages to turn aside Shane Bieber and bring it home this year you’ll be sitting pretty on your short-term investment. And even if he doesn’t, we’d be shocked if he doesn’t produce a season that will leave you with some decent gains by season’s end. 9/10

Within the next few years, a Cy Young seems inevitable. Plus he’s on a team that’s kind of famous for winning World Series Championships. Both great reasons to be very optimistic about where the value of your investment will be in the medium-term future. 9.5/10

Like we’ve been eluding to this whole time, Cole has a Hall of Fame career in the making. Sure, it’s going to be hard to resist selling for profits along the way but one day your Gerrit Cole rookie card could be worth far more than it will be in the short or medium term. We wouldn’t blame you for holding onto at least one for safekeeping. 9/10