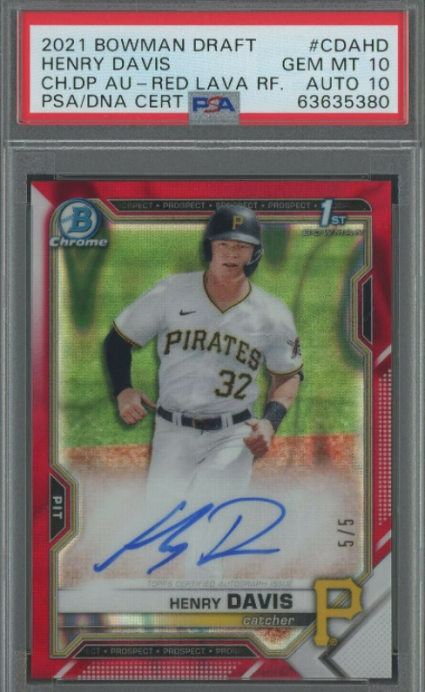 We’ve all heard of catching prospect phenom Adley Rutschman by now. But if you had to pick between the two, one could argue that the best Henry Davis rookie cards may be the better investment. For starters, Rutschman is so well known at this point that his card values are as high as they’ll get until he proves it on the big stage. Secondly, Henry Davis is starting to prove he has what it takes to get the job done in the minors. And with Davis still relatively unknown compared to the phenom in Baltimore, there should be some room for the market to grow prior to his eventual call up.

As we’ve said, Henry has yet to make his MLB debut. Therefore, there aren’t any “true” rookie cards out yet. However, there are some great prospect cards to load up on for the run up to Davis’ call up. Let’s take a look! 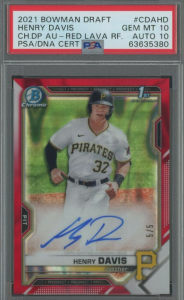 Simply put the best Henry Davis rookie card on the market so far. Especially if you’re looking to dump a bunch of loot into your investment. Whether it’s an autograph or a rare parallel you’re after, Bowman Draft has the bases covered. More of a causal collector? Hone in on either a base card or one of the unique inserts. Either way, it’s hard to go wrong with Bowman’s flagship prospect collection. 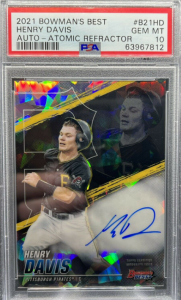 While we can’t say Bowman’s Best lives up to Bowman Draft in terms of card value, it certainly competes in terms of style. Just take a gander at that action shot shown above and you’ll surely find yourself nodding in agreement. Davis is featured rounding the base paths showing off that rare speed for a catcher. What’s more, he’s going so fast his helmet is about to fly straight off his dome! Talk about a spectacle to behold.

At any rate, this set is perfect for moderate to casual investors who want the prestige of a Bowman card but don’t want to shell out the big bucks for one of the higher end cards from the Draft collection. 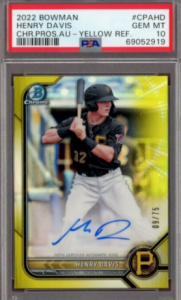 While it’s not his first Bowman, the 2022 Chrome collection simply cannot be overlooked as one of the best Henry Davis rookie cards on the market. For starters it has the name Bowman Chrome. Obviously a very good feature if you’re a baseball card. Additionally it comes at a steep discount when compared to the 2021 Bowman Chrome collection. Either way you’ll want to own one of these before Henry makes a big splash on the biggest of stages. 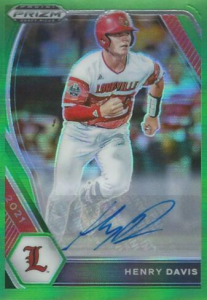 Who says Panini can’t compete in the baseball card market? As you can see here the brand best known for it’s basketball and football card dominance sure knows how to lay down one heck of a baseball card. Of course, the only thing missing is the MLB license. However, some folks love owning cards that show where a player was before going pro. The card features Davis leaving the batter’s box in his college gear. Likely thinking about how much cash he’ll soon be making in the MLB. Seek out a rare Prizm variation that includes an autograph. It’ll cost you far less than some of the best Henry Davis rookie cards card made by Bowman. 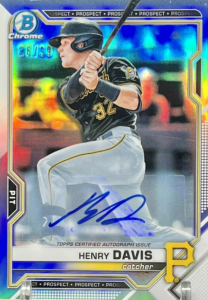 Another take on the base card from the Bowman Draft collection we started out with. Instead of taking a leisurely home run trot, Davis is driving the ball with authority. Something we’re sure to see plenty of over the next few years. Just like the base card, the image variation also comes available with an autograph and in the refractor format. However, this one of the best Henry Davis rookie cards for collector’s who love unique finds.