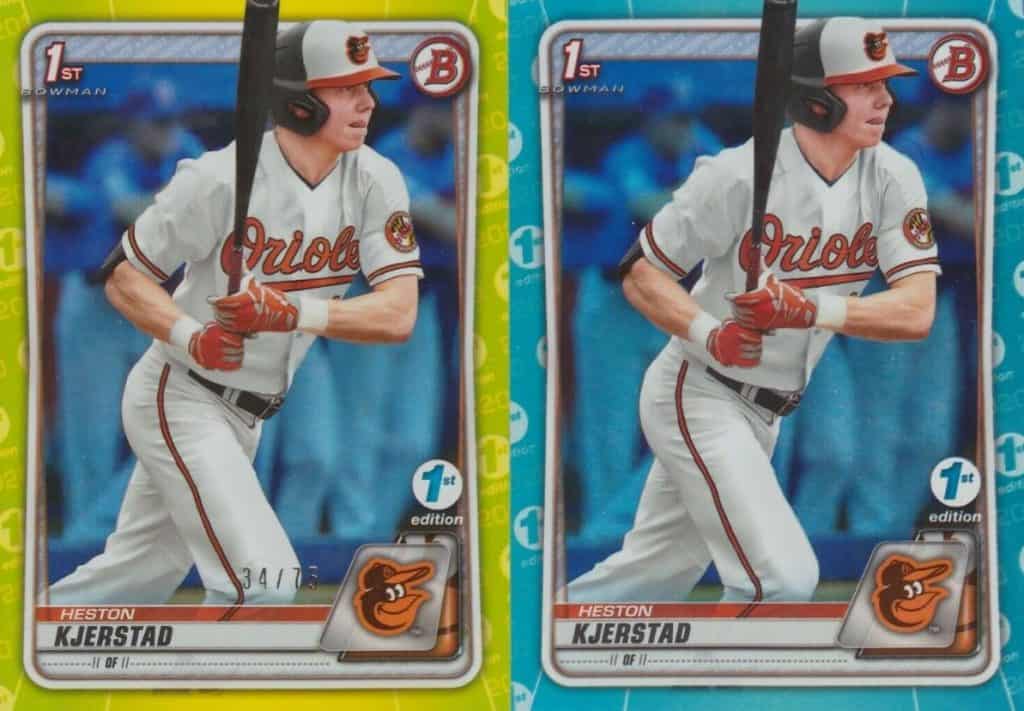 The early edition Heston Kjerstad rookie card options are sure to be a hot commodity come spring. And with a live bat like his, it’s easy to see why. While the Orioles may have raised some eyebrows by taking Kjerstad #2 overall in the 2020 draft, his play at Arkansas seems to warrant that decision. And then some.

In just about a full MLB season’s worth of at-bats, the kid from Amarillo has dominated SEC pitching to the tune of a .343 average, 37 home runs, 129 RBI, and a 1.011. One of the lone knocks on the Kjerstad is his slightly high strikeout to walk ratio. But for a player capable of hitting like that, why not let him swing?? At any rate, we’re about to see what Kjerstad can do against minor league pitching. And if he’s anywhere close to as successful as he was against college pitchers, WATCH OUT. Safe to say you’ll be wanting to go back in time and load up on the following Heston Kjerstad rookie cards!

Let’s not forget about the #1 pick in the 2020 MLB Draft! Here are some great Spencer Torkelson rookie card investment options. 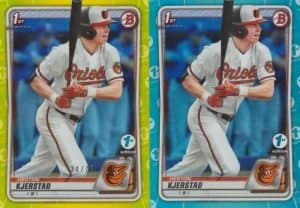 That tongue says it all! Focus, grit, determination. After seeing this card we’d be surprised if even Shane Bieber could keep Kjerstad from going yard. At any rate, this is Heston’s flagship rookie card and the values show it. While there are plenty of great intermediate options, some of these get really out of hand. Take the Red Refractor Auto, for example. The card sold in early 2021 for more than $7,000 on eBay. WOW!

Back to those intermediate investments. We recommend the Gold, Black, and Blue Reftacrors. With autographs, of course. These all fall in the range of $500 to $1,000 with the Gold being the most valuable and Blue being the most affordable (we’d never use the word “cheapest” when describing a card like this!). If you’re only looking to spend a couple of hundred bucks seek out the base card with an autograph or one of the more common refractors with no autograph. 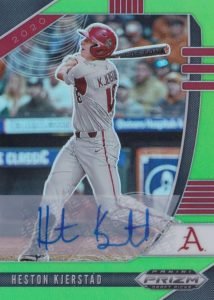 While Bowman is by far the most valuable of all the early Heston Kjerstad rookie card options, Panini Prizm makes a nice and easy pick up for casual investors. For instance, you can snag the Neon Green Prizm shown above for well under $100. Additionally, there’s plenty of other Prizm options and even a sweet “Fireworks” parallel that go for similar prices. 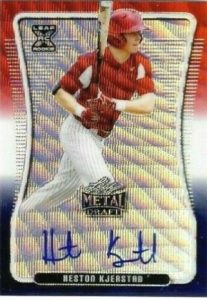 A baseball card collection even more affordable than Panini Prizm, you’ll need to seek out the rarest of rare to come up with a card worthy of being called an investment. However, they’re out there! For instance, the Red White and Blue Wave autograph shown above will at least take $100 to add to your collection. While Leaf certainly doesn’t offer high value, it makes up for it with STYLE. Just take one look at that card and tell us we’re wrong!

Another Oriole who seems to be a rising star: Ryan Mountcastle Rookie Card Hotlist

Hard to imagine this guy NOT punishing minor league pitching in the same way he crushed those unfortunate collegiate foes. At age 21 he’s already got plenty of experience under his belt and we could see a quick move through the various levels of the Orioles farm system in his first year. 9/10

He’ll likely be called to the big leagues at some point during this time frame. Which is a good thing because that means he’s been doing his job. If you don’t sell in the short term consider unloading before he debuts. That walk to strikeout rate may catch up to him in the big leagues. 7/10

We’ll update this as he moves through the minors in order to offer a better perspective on what kind of MLB player Heston will be. At this point, we want to see what he’ll do in 2021 before we start thinking about 2024 and beyond! N/A