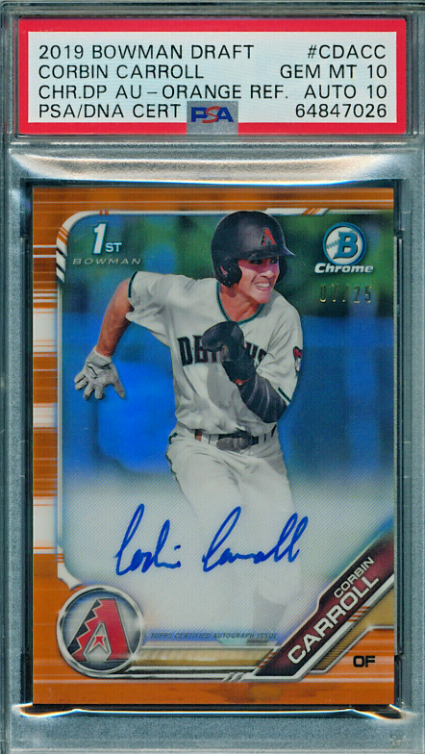 With a new year comes an exciting array of players who’ll be looking to make an impact in professional baseball. Whether it be on the big stage or in the low levels of the minor leagues there will be plenty of guys trying to prove they belong. While there’s never a shortage of baseball pipeline talent, today we’re strictly focused on the cards that will be getting the most attention from collectors.

With that said, welcome to our Hottest Baseball Rookie Cards 2023 edition. Here we’ll cover MLB’s crop of emerging stars that could make an impact on both the sport AND your bank roll. But what players are ready to make a splash in 2023? Let’s find out!

We all know prospects can be a risky endeavor. For every stud like Julio Rodriguez there are just as many who fizzle out and never live up to the hype. Needless to say we’ve been caught holding the bag on failed prospects on a few occasions. But is there anything more exciting than watching one of your investments break out into stardom? As far as baseball card collecting goes it’s hard to think of a better ride. Anyways, here are a few players that could pay back early investors in a big way. 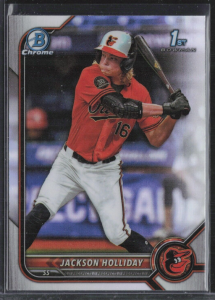 When you’re the son of a hitter like Matt Holliday and the number 1 pick in the draft there will be no shortage of collector’s looking to buy your 1st Bowman card. That’s precisely why we’re opening our Hottest Baseball Rookie Cards 2023 edition with Jackson Holiday. The 19 year old short stop projects as player that should produce plus results in all scouting categories. In other words a true 5 tool player.

Holiday broke Realmuto’s national high school record for hits in a season and finished that year with a jaw-dropping .685/.749/1.392 triple slash. If he carry’s that over into his first tase of the minor’s you’ll be glad you got in on the ground floor! 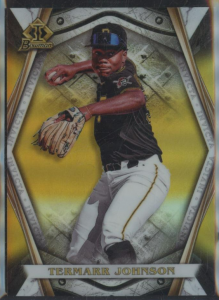 Standing at only 5 feet 7 inches Termarr Johnson makes up for what he lacks in height with his ability to square up the baseball. At least that’s what the scouts say. In addition to his 70 grade hit tool the 4th overall pick in the 2022 MLB Draft has a good amount of pop with a 60 grade in the power category. And we all know what the combination of power and average leads to. Many All-Star Game appearances. If you’re going to bet on one player from last year’s draft it’s hard go against Termarr. 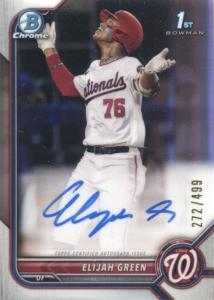 We go from a guy who’s a bit undersized to one that most certainly IS NOT. Standing at 6 foot 3 inches tall and weighing in at a massive 225 pounds Elijah Green has the build of his father who happens to be the former Pro Bowl tight end Eric Green.

Anyways, with that kind of stature you may have guessed that Elijah Green has plenty of potential when it comes to power. In addition to the pop, Green is also a burner on the basepaths with a 70 grade run tool. How about a 30/30 season to open up his first year in the minors? Sounds like a plan to us! Make it happen Elijah.

While the previous players have yet to see a pitch at any professional level, the following cards feature guys who will gain rookie status in 2023. In other words TRUE rookie cards. You know, the kind with the RC logo in the corner. Sadly these won’t arrive until later in 2023 but until then there are some amazing prospect cards available to hold you over.

At any rate, be sure to think long and hard about adding the following players to your collection before they mess around and win Rookie of the Year in 2023. 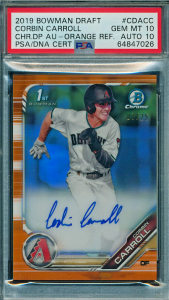 When it comes to the National League we’re not really going out on a limb with our Rookie of the Year prediction. Simply put, Carrol is a baseball stud with a tool box overflowing with the kind of stuff scouts drool over. For starters, he’s got a quick bat that should produce average along with a decent amount of power. Additionally, he knows how to handle the base paths only being caught 7 times in 59 swipe attempts. And while it’s usually not a big factor for baseball card values, the kid is SILKY SMOOTH in the outfield. A no brainer for our Hottest Baseball Rookie Cards 2023 edition. 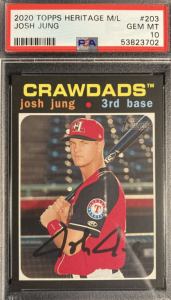 When it comes to our American League ROY prediction there will likely be some Gunner Henderson fans giving us some push back. While Henderson should be in the running for the award down to the wire, our bet is on big Josh Jung. The rangers top prospect finally made his MLB debut in 2022 after a few injury ridden seasons in the minors. However, when healthy Jung has done nothing but produce.

Sure, some will point to his .204 average and near 40% strike out rate in his first taste of big league action in 2023 as cause for alarm. True, the stats weren’t pretty. But guess what? Like Mr. Kruger, we’re not too worried about it. Why? Jung has shown at every level that he’s too good with the bat to let those numbers be anything but a product of small sample size. Look for the average to go way up, the strike outs to down, and plenty of over the fence power in 2023.