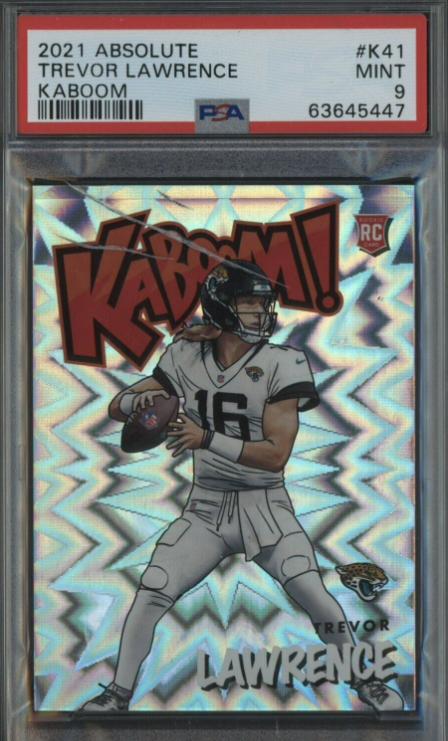 With the 2022 NFL rookie class being a bit of a bust in terms of offensive weapons, our Hottest Football Rookie Cards 2023 list is going to be focused on the future. And a bit on the past as well. While we certainly wish the 2022 rookies had performed better, there is plenty of hope for the future with an exciting new batch of them emerging in 2023.

In addition to the upcoming class, there are some formerly hyped rookies that are starting to emerge as future NFL stalwarts. Let’s find out which rookies and rising stars to focus on in 2023! 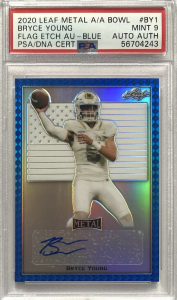 There’s no doubt that the projected number 1 pick in the 2023 NFL draft out of Alabama is going to produce some of the hottest football rookie cards in 2023. While the true rookie cards are coming later in the year, there are some great college editions that are available NOW. Perfect for anyone who’s wants to get in early. Come draft day the hype train’s definitely leaving the station.

The card above is an amazing autograph from the 2020 Leaf Metal collection. In addition to Leaf, Bowman has also put out some must-own Bryce Young prospect cards. 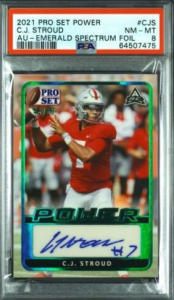 As far as his available cards go there are some great options from Pro Set, Leaf, and Bowman Football. And once the pro editions arrive they’ll no doubt be some of the best football rookie cards to collect in 2023. Whether you’re looking for a cheap pick up or an expensive autographed card you’ll have no trouble finding it. 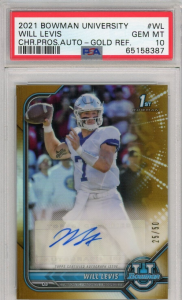 Next we have a sure fire first rounder that simply cannot be left off of our Hottest Football Rookie Cards 2023 list. While he may not have the big school pedigree and eye-popping stats of the previous two QBs, Will Levis has plenty of experience in a pro-style offense. A feature that teams value when they don’t have time to develop a college-style QB. Additionally, his large frame and strong arm are also features that should help Levis adjust to life in the NFL faster than most. 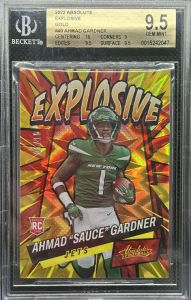 To say Sauce lived up to expectations in 2022 is an understatement. Not only did he make the Pro Bowl in year 1, Gardner is also the runaway Defensive Rookie of the Year favorite. Heck, the kid even has his own B-Dubs sauce for crying out loud! Safe to say he’s going to be a force within the NFL for many years to come.

If you can only buy one Sauce Gardner rookie card we’d recommend bucking up for the coveted “Explosive” Insert shown above. A rare SSP that should increase in value as Sauce cements himself as one of the elite NFL defenders.

While neither of the player’s featured in this section had a sensational rookie season they emerged in 2022 as potential stars at the QB position. Therefore these 2021 rookie’s find a place on our Hottest Football Rookie Cards 2023 list. 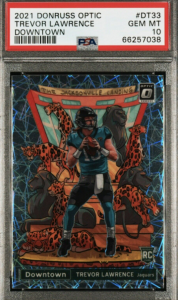 In case anyone missed it, Trevor Lawrence proved at the down the stretch in 2022 that he has what it takes to put a team on his shoulders. Turning a laughing stock of a team into a sudden playoff contender in such short fashion paints a rosy outlook in 2023. With a core roster locked up for many years down the road, a few more pieces around Lawrence could produce a deep playoff run in the years to come. 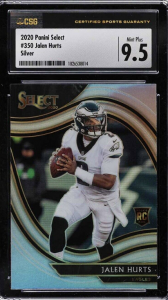 Prior to the Hurts’ shoulder injury he was the favorite to win the 2022 NFL MVP. Talk about a turn around. While it took a couple seasons to find his footing, Hurts has definitely shown he’ll be a big name for a long time to come. He get’s it done through the air and on the ground and is without a doubt one of the most exciting players in the NFL. If a Super Bowl is in his near future you’ll be glad you owned a Jalen Hurts rookie card once it happens.