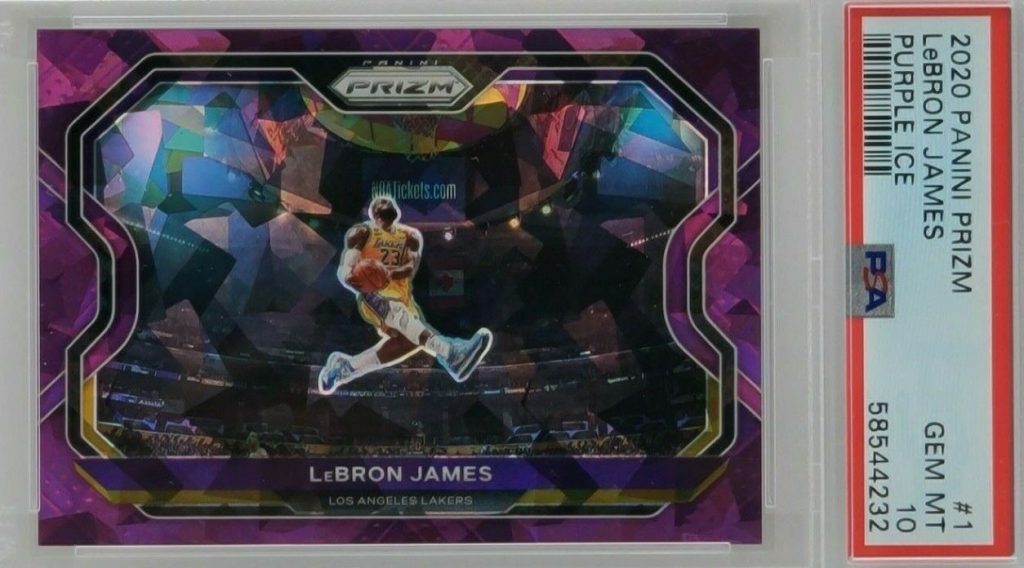 If you’re looking for the hottest Lebron James cards on the market today, safe to say you’re not the only one. It is no secret that Lebron James is the best player in the modern era of the game.  While many players such as Kevin Durant, Giannis Antetokumpo, and Luka Doncic have challenged King James’ throne, no player has been consistently amazing long enough to play the role as the usurper. Therefore the only real question is whether or not Lebron James is the greatest basketball player EVER.

In 17 seasons, Lebron has averaged an astounding 27.0 points, 7.4 rebounds, and 7.4 assists per game. In 15 out of the 17 seasons, he has managed to average at least 25 points, 5 rebounds, and 5 assists per game. So it’s no shocker that Lebron has been named an All-Star in every season of his career. He has also been named to an All-NBA team in each year of his career and has also been named to the All-NBA defensive team six times.

And when it comes to the big-time accomplishments, none in today’s game can match what Lebron James has been able to do. He’s a four-time league MVP, has won four NBA championships, and has been named NBA Finals MVP every time he’s won it all. Few will forget his return to Cleveland where Lebron helped bring the Cavs to the promised land after leading his team back from a 3-1 NBA Finals deficit against the Golden State Warriors. All of these reasons and more are why you should consider investing in the hottest Lebron James cards on the market. Here are a few that come to mind!

Trending Content: Most Valuable Basketball Cards of the 1990s 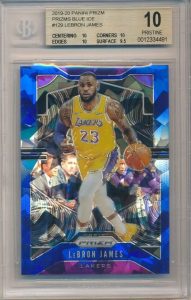 This Blue Ice Prizm card above has a modern flair with the purple and blue layout blending perfectly with the home Lakers jersey worn by Lebron James. The basketball held in the picture by Lebron may remind you of the one in Space Jam 1 that contained had the talent of the NBA players. No wonder those aliens stole it! Hopefully, Lebron can do a better job at keeping the ball safe when Space Jame 2 is finally released later this summer! At any rate, one of the reasons this card has got to be one of the hottest Lebron James cards on eBay is the wide array of values. Whether you’re looking to spend $5,000 or just $50, you find something from the 2019-20 Panini Prizm collection. 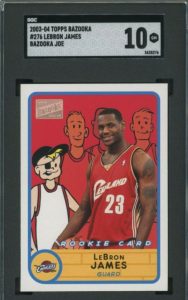 This one has fun written all over it. The Tops Bazooka logo on the left side mimics the old school logo of Bazooka bubble gum. The card’s white layout and red background go even further to illustrate that old Bazooka Joe look. Lebron is donning his road jersey and has three animated characters behind him that blend well into the picture.  He also has another animated character to the left of him. A strange little guy wearing an eye patch. Anyways, values have a lot has to do with the condition of the card. Some grade 10 cards sell for as much as $3,000 while ungraded versions still go for a couple of hundred bucks. 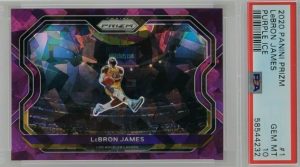 Beautiful and poignant yellow and purple colors that represent the Lakers can be seen in the exterior of the Purple Ice Prizm card above. The picture shows Lebron James flying through the air with the greatest of ease in a way that resembles the late and great Kobe Bryant as he mimics one of his most famous dunks. There are almost too many parallels to count so find one in your price range and get it done. Safe to say there will be a market for these for a LONG time to come. Easily one of the hottest Lebron James cards on eBay at the moment. 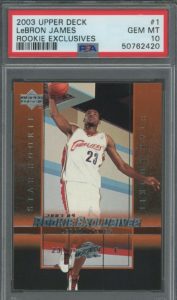 Lebron will be back next season with Karl Malone in his sights to become second on the NBA’s illustrious all-time scoring list. If he stays healthy that’s a milestone he’s all but certain to achieve. A healthy season will also all but guarantee Lebron another trip to the playoffs and a shot at yet another championship. One would think he’ll have a chip on his shoulder after what happened this year! Plenty of reasons to think you’ll do just fine with a short-term approach.

While surpassing Malone will be nice, the REAL achievement should come in the 2022-23 season when Lebron overtakes Kareem as the all-time scoring champ. Perhaps a retirement announcement and another championship the same year? Talk about a perfect storm. We wouldn’t blame you for taking short-term profits but this is the real money make over the next few seasons.

Can’t go wrong here. Lebron will forever be in the argument as the greatest player to ever play the sport. Just like the icons before him, his legend will live on throughout the decades. And decades from now when we look back and realize just how special James’ was on the court, the value of the cards on this list will pale in comparison to what they are destined to become.