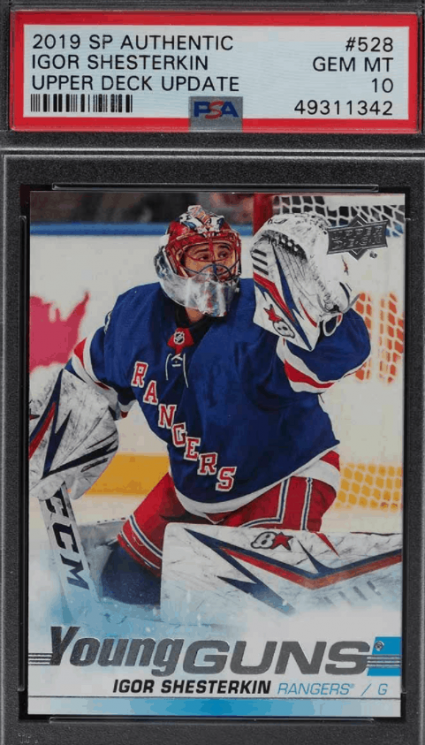 With the jaw-dropping season he’s having, it’s safe to say there are quite a few investors looking at the Igor Shesterkin rookie card market. While Igor may not have been as hyped as fellow 2020 rookie and teammate Alexis Lafreniere, he reigns supreme in one very important factor. Being great at being an NHL goalie. Yes, the hotshot young goalie in New York is currently going toe to toe with Jack Campbell for the Vezina Trophy. Therefore, its easy to conclude Igor is handling life in the NHL quite well.

So if you’re Alexis Lafreniere rookie card investment isn’t shaping up the way you thought, consider rolling it into a few Igor cards. The way he’s going, it may very well end up being a much better one. Especially if he proves all the sharps right by hoisting the Vezina come season’s end.

While Igor’s true rookie season was 2020, he played a few games in 2019. And quite BRILLIANTLY at that. Therefore, the cards featured here are all featured from the 2019 where Igor managed to win 10 out of 12 games with a 2.52 GAA . Brilliant indeed. 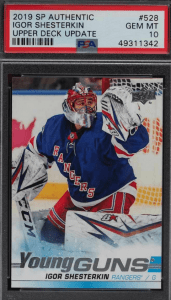 Nothing flashy, just a high-quality player on a high-quality card. There’s plenty of variations and two different photo styles to choose from. Consider grabbing one with an autograph for more skin in the game. We personally favor the Young Guns edition. Right now it looks like the highest valued cards sell between $500 to $1,000. 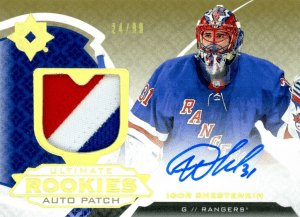 Once again you won’t have a hard time finding a variety of great options in this set. In addition to variety, the set provides tremendous value for those who are only looking to test the waters of the Igor Shesterkin rookie card market. For instance, you can pick up many of the rarer parallels for less than $200. Just take a look at the one above. Yes Please. 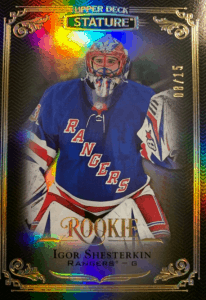 Now, these cards are something to behold. Talk about eye candy. The many parallels from this set offer a color explosion across just about every millimeter of the card. It almost seems like Igor’s autograph would take away from the card’s true beauty but it’s available nonetheless. By the way, they also come with material patches if that’s your thing. Solid cards, the highest of value of which approach $500. 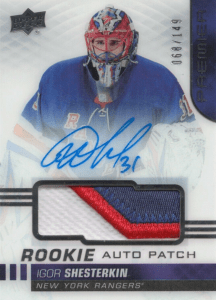 As far as popularity, this is one of the most bought and sold Igor Shesterkin rookie cards. So if you’re looking for one that should move quickly when it’s time to sell consider this beauty. Actually, there’s nothing too beautiful about this card. Just a simple layout from the folks at Upper Deck. If you’re looking to spice things up grab one of the countless numbers of parallels and consider a patch/auto combo. 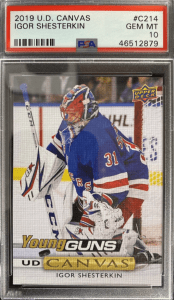 Now, this is the type of hockey card we can get behind. The set reminds us of the classic Upper Deck cards of the early to mid-nineties when we first got in the game. Those were the days! But enough nostalgia. In addition to being great looking cards, they’re quite the bargain to boot. Even a PSA GRADE 10 GEM MINT should only run you a couple hundred. Do it.

MUST OWN Igor Shesterkin Rookie Card 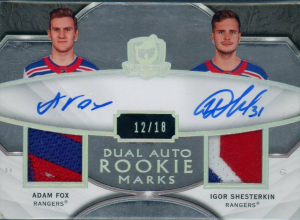 While Igor shared his first “official” rookie season with Lafreniere, he shared his unofficial one with the man shown here. Adam Scott has been nothing but a staunch ally of Igor since his debut and together they do an amazing job at preventing pucks from going into nets. This is a duo that should be around for QUITE some time. And if they begin hosting cups together? Safe to say you’ll be more than happy you grabbed this gem. It’ll cost you though. In addition to the ink the card also features game worn material and it also has a print run of just 18. Features that more than justify the $1,500 to $2,000 price tag.

Throwback alert! Check out our list of Most Valuable Hockey Cards from the 80s!

True, the market has been driven up a bit with season Igor has produced when Igor burst onto the scene last season. However, it’s FAR from it’s potential peak. We’ll see that with playoff success and a Vezina Trophy. And a Stanley Cup? WATCH OUT. 8/10

If you think Igor is a flash in the pan, think again. Just check out these numbers from his pre-NHL days. Pretty sick. We’re betting on true staying power here. Quite possibly the most likely outcome you’ll face as an investor is a tough decision between whether to sell for a quick short-term profit or hold out for even bigger dollars. Nice problem to have. If you opt to go with the latter, there are a lot worse combos to bet on over the next five years than Lafreniere and Shesterkin. 9.5/10

While we are incredibly high on Igor, we need to see at least one more year of play before we let our minds drift into this realm. 7/10