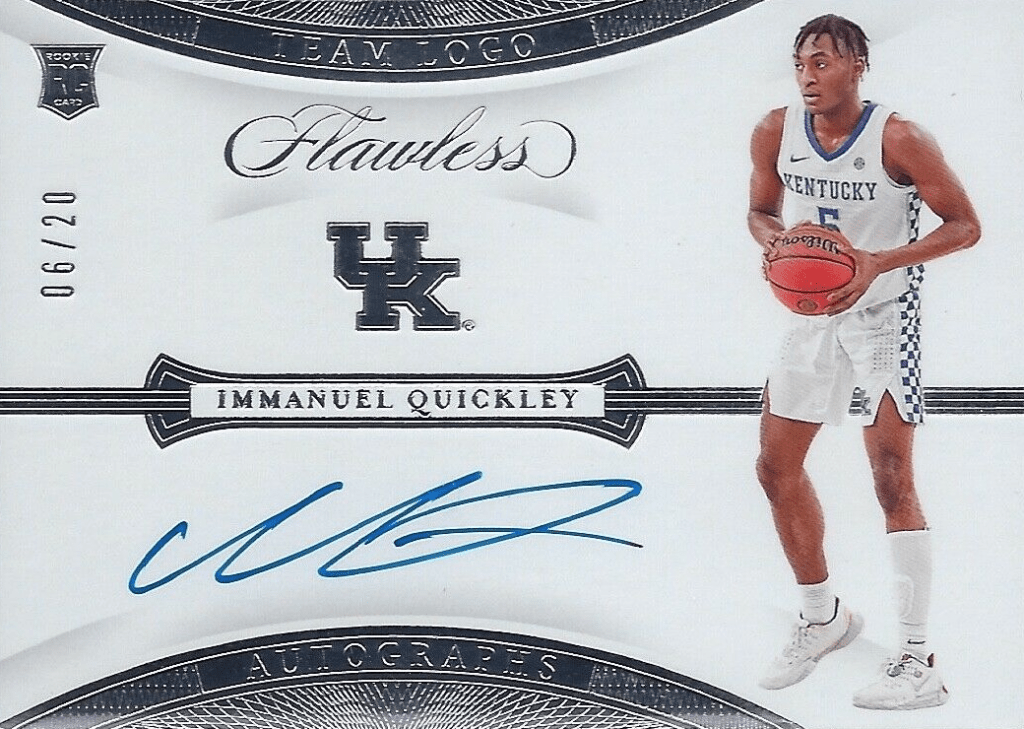 He’s quickly (pun somewhat intended) become one of the best performers in this year’s rookie class, so it’s no wonder that an Immanuel Quickley rookie card is becoming a must-have item. But what’s gotten so many folks so excited about his play?

At first glance, Quickely’s numbers aren’t overly impressive: 12.2 points and 2.4 assists per game aren’t anything to write home about. However, there’s one thing you need to take into consideration before you bust out the ole’ Jump to Conclusions Mat. Playing time. Quickley has yet to start a game and is only averaging 18.6 minutes on the court per game so far in his debut season. Extrapolate those numbers to reflect the playing time of a regular starter and suddenly you have a first-year point guard who’s averaging almost 25 points and 5 assists per game. Not too shabby.

We’re hopeful Quickley’s playing time will increase as the year goes on. And if it does, his Rookie of the Year vote totals at the end of the year will only grow stronger. Before that happens, it might be a good idea to pick up a couple of the following Immanuel Quickley rookie cards! 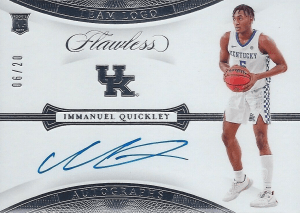 The card above is /20 Team Logo parallel that includes an on-card autograph. As we’ve grown to expect from Flawless the card has a minimalist design that puts the player first and foremost. Price-wise this card makes for an easy investment as it’ll only set you back a few hundred before being graded. Looking to throw more at it? No problem. Panini Flawless is known for producing gems that’ll need thousands of dollars from your bankroll. 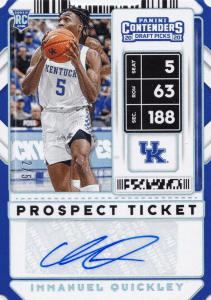 This set should definitely contend for your attention (we’re just full of the puns today!). The autographed Prospect Ticket shown above is another entry-level investment that you can pick up for under $200. Just like the Flawless set, there are plenty of high-end options if you have a hankerin’ to go big. The 1/1 Auto Draft Ticket comes to mind. An amazing set with a wide array of choices for all levels of investors. 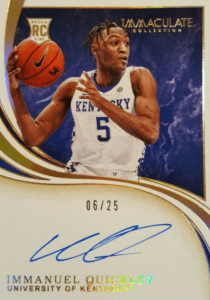 We’re not so sure about the choice of the word “immaculate” to describe a trading card but a great set nonetheless. The Immanuel Quickley rookie card shown here is the /25 Gold Auto parallel. Even with it being a rare card, the current asking price is surprisingly affordable at around $300 (before Beckett or PSA get their hands on it). 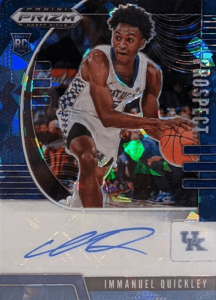 Oh so many options to choose from in this set. Like Panini Contenders, Prizm Draft Picks has a boatload of options for just about every level of investor. The Gold and Green Prizms are some of the most valuable options in the set. Meanwhile, cards like the Blue Cracked Ice Auto shown above make for great moderate to lower range pickups. Whatever you decide on you’ll end up with a card that’ll be in high demand when you go to sell. 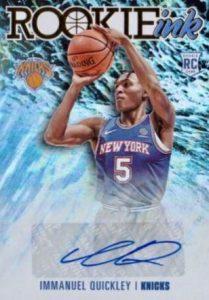 The Rookie Ink card shown above is one of the most valuable of Quickley’s post-draft rookie cards so far. For starters, as the name suggests, it includes an autograph. Secondly, it has a variety of parallels with some of the super-short prints being worth more than $2,000. However, you can always pick up some of the more common parallels for just a couple hundred bucks. The choice is yours! 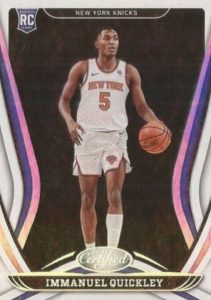 Above we have the base card from the set showing Quickley casually dribbling the ball down the court. You can pick it up ungraded for right around $30 at the moment. If you feel like upping the ante seek out one of the Blue parallels. They look amazing and most are valued at more than $100.

It’s only a matter of time before Quickley starts getting the minutes he deserves. Once that happens the stats we all crave should follow suit. By the end of the year, Quickley will likely be among the finalist for who gets to play runner up to LaMelo Ball for Rookie of the Year honors. The potential to make short-term profits is hard to resist. 9/10

While we’re certainly bullish on the way his season’s going, we’d like to see what he does with those extra minutes on the court before we get too far ahead of ourselves. If he rises to the occasion, and we think he will, setting a card or two aside for bigger profits down the road makes a whole lot of sense. 7/10