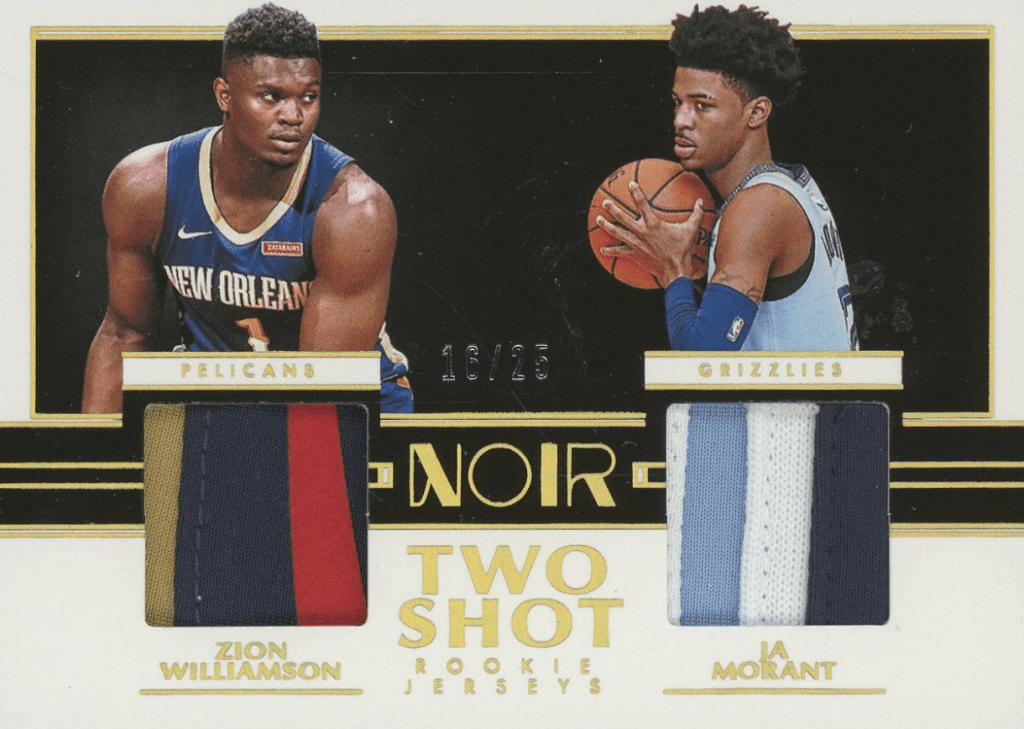 The latest opportunity to buy a Ja Morant rookie card at a discounted price seems like it went by WAY too fast. For collectors, that is. We’re sure Ja was thrilled to get over that early-season injury as quickly as possible and get back to doing what he does best: MAKING PLAYS. As great as his Rookie of the Year season was, Morant is giving us an encore performance that is even more fun to watch than the first act. In 36 games so far this season the Grizzlies’ superstar guard is now averaging 19 points per game along with a whopping 7.8 assists. Both improvements upon his impressive rookie numbers.

In case you missed it this is what we had to say just before Ja’s return from injury: “Even with the brief ankle setback, Ja is poised to pick up where he left off on his Rookie of the Year performance last season. In other words, NOW is the time to shore up your portfolio with one of his first-year investment options before things even get more out of hand. And really, every portfolio should have at least one Ja Morant rookie card before this thing pops off for real. So let’s get started!”

Can’t say we didn’t warn you! However, don’t think it’s too late if you missed the opportunity to pick up a card at a lower price during his injury. After the first 100 games of Ja Morant’s career, it’s becoming clear that the kid is here to stay. For a while. And really, we don’t see why every year won’t be another step forward for the foreseeable future. So let’s see what out there!

Question of the day: Who will have a better 2021, Ja Morant or  Zion Williamson? 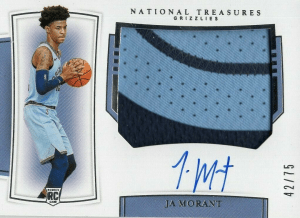 There are 75 of these in existence and they’re all worth plenty of $$$. So count yourself lucky if you’re an owner. And if you’re not? Dig up at least $6,000 and you might be able to score one that hasn’t been graded. Want one in mint condition that’s been graded by Beckett?? Call your banker because you’re gonna need some more purchasing power! Sure the price is high, but the returns could be even higher if Ja turns up the heat even further in his second season. 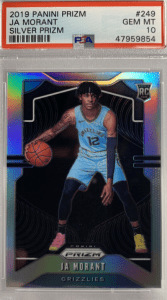 As we just mentioned in our 2020 Panini Prizm Football review, this set is an industry staple. Therefore, you’ll find plenty of great investment options no matter what you’re looking to spend. If you want to go all out, hone in on one of the rarer Prizms and get to work. Only want to throw a few bucks at it? Plenty of base set options are available. Either way, there’s plenty of room for growth here. 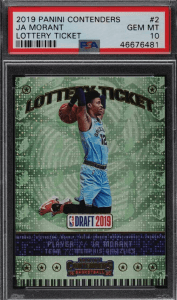 A set that’s contending with National Treasures for the title of most expensive Ja Morant rookie card options. This card comes in a variety of parallels. For instance, there “Cracked Ice” version has a run of only 25 cards and sold for nearly $15,000 recently on eBay. If you’re looking for a mid-range investment check out the dazzling “Shimmer” parallels. 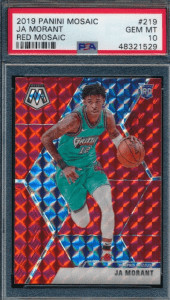 Mosaic is garnering plenty of attention for a variety of reasons. In our opinion, the actual physical quality of the cards seems to be above and beyond some of its competitors. Either way, the industry has fully embraced this new set that’s crashed the party over recent years. As far Ja Morant rookie card choices go, there’s plenty to consider. Both the NBA Debut and base card have plenty of parallels each more exciting than the next. Do yourself a favor and get some! 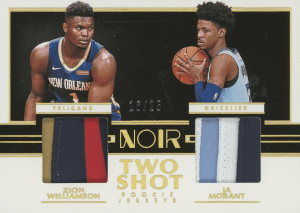 Who can resist a Ja Morant and Zion Williamson mash-up? Add to the fact you won’t have to pay an arm and a leg to own this one and you have a card that collectors everywhere can appreciate. Besides that, Panini Noir is one of the most attractive sets out there when it comes to appearances. Dark undertones that contrast the typical bling found on most modern cards is a can’t miss in our book! 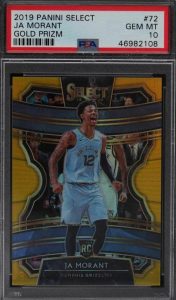 While maybe not as powerful a name or as popular as Prizm, Panin Select is getting close. As you can see by the amazing variety of values and collectible Ja Morant Rookie cards in this set. The set provides plenty of high-end options over $5,000 in value while also delivering the goods for investors who only want to spend a $100 or so. 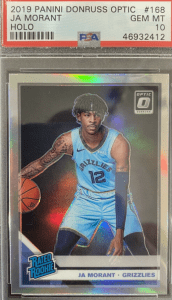 These fall just outside our top five but since Donruss is one of our all-around favorites, we’ll throw in a bonus section. Both the Optic and regular base set are fan favorites so both should perform well when you’re ready to unload for profits. We personally like the “headband on” Optic version better. Other noteworthy cards from Donruss include the “My House” and Great X-Pectations inserts. 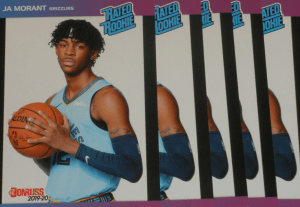 Just when you thought the 1989 Donruss layout made famous by players like Ken Griffey Jr. and Gary Sheffield couldn’t get any cooler, Ja Morant enters the chat. While this card may be big on nostalgia, it isn’t big when it comes to the price tag. You should have no problem picking up a few of these for less than $100 combined. So if you’re looking to stock up (and still have room for other investments) you could do a lot worse than this tried and true 1989 Donruss throwback. 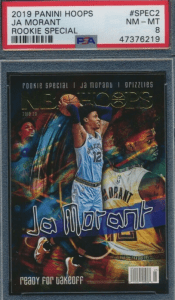 While these certainly aren’t the most valuable options, they’re without a doubt our favorite to look at. Even more than Panini Noir. Sad but true. Just take a look at that “Ready For Takeoff” card above and you’ll see what we mean. So many options to choose from and many at prices the casual investor can get in on. 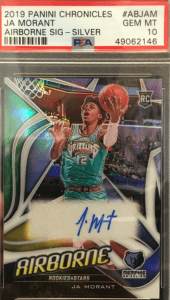 Let’s get AIRBORNE! An all-around amazing card. The only complaint we have is that Ja appears to be going up for a passive layup instead of an in-your-face SLAM DUNK. Can’t win them all though. At any rate, looks aren’t the only thing that makes this card special. Let’s talk value.

There’s a decent amount of it for the right card. For instance, if you’re the proud owner of a 10 grade Silver Prizm autographed variety you’re holding at least $1,000 in your hand. Or in your wall case, shoebox, safety deposit box, or wherever you choose to keep your investment pieces. Just don’t say under your mattress. Okay, enough digression.

Overall the Chronicles set doesn’t hold a candle to Prizm but it offers some stunning cards at reasonable prices. Something that is certainly welcome the way the NBA card industry has been trending lately.

Random thought – How happy will you be about your Ja Morant rookie card investment if he turns out to be as big as Luka Doncic??

As we’ve been eluding to this entire post, we LOVE this option. Just on hype alone, you should do well if you buy after the season while the market takes a breather. But if you must have one right this instant, we think you’ll be just fine. We’ve seen how Ja is handling his second year and needless to say we’re impressed. In other words, no sophomore slump – already one problematic scenario taken out of the equation. Heck, if not for the minor ankle tweak, we might have seen him make his first All-Star appearance. Enough said. 9.5/10

While we’re usually hesitant to tie up our bankroll in an “unproven” player, this isn’t the case with Ja. He exceeded all expectations last year and nearly led his young team to an unexpected playoff appearance. We think missing out on the party will only motivate Ja Morant to future success. And hopefully his first playoff appearance in 2021. Only time will tell, but in the next 3 years we happen to think Morant will be one of the biggest names in the game. Expect a playoff contender. 9.5/10

The only gripe we have with this strategy is all the chances for big profits you’re bound to pass up along the way if you decide to hold for the long term. However, based on the small sample, this strategy could end up rewarding you in a BIG way if you have the patience. If Ja and the Grizzlies end up grabbing a title in the medium term you’ll be forced to STRONGLY consider this option. 7.5/10

3 Investments we like even better than a Ja Morant rookie card!

3 Best Kirill Kaprizov Rookie Cards To Own In 2023