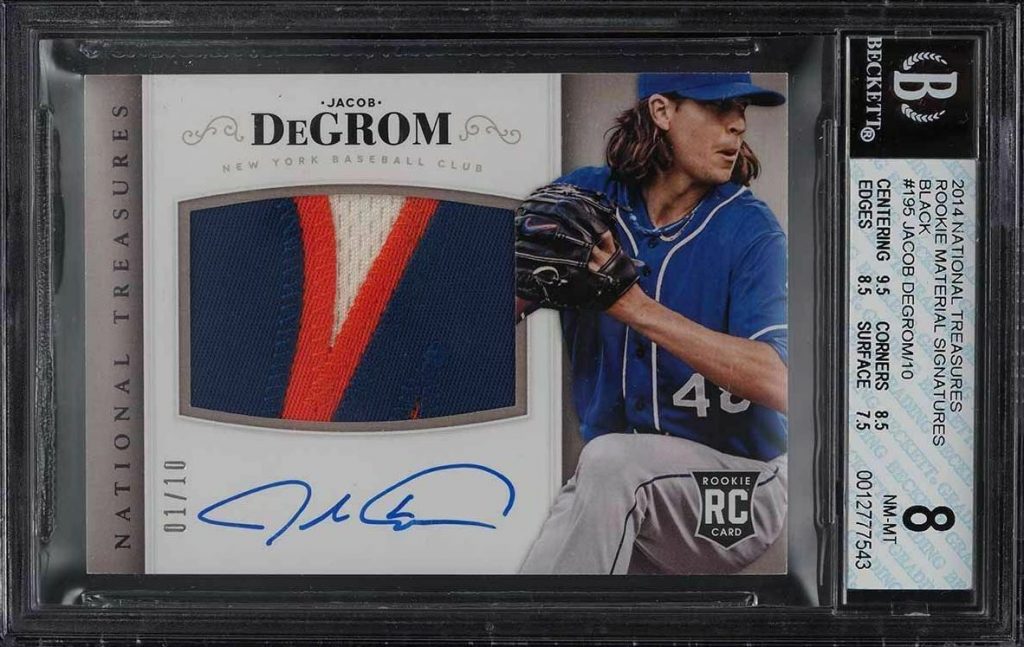 If you have an interest in owning a Jacob DeGrom rookie card that makes plenty of sense seeing as he’s been one of the top pitchers in the league for a few years now. If not THE top pitcher. And in 2021 he is signaling that he has no plans on giving up that title any time soon. Let’s just face it, the guy’s numbers are insane! With an ERA of 0.51 and 59 strikeouts in 35 innings, deGrom is once again showing the baseball world who’s boss. Unfortunately, he has not had much help from his team on the other side of the plate so if you’re looking for his first season with more than 15 wins, keep dreaming.

But right when it seemed like he was poised to snag his 3rd Cy Young in 4 years, we get news that deGrom is experiencing some lat inflammation. Ugh. For now, it seems like it may be a minor injury so let’s hope that’s the case. But even if it’s not so minor, deGrom has put up a career that has Hall of Fame potential. So let’s hope for the best but be prepared to buy low if a prolonged injury sends the Jacob deGrom rookie card market down a bit. Here are some great options to target!

The way he’s pitched so far in 2021 we’d say Milkwaukee’s ace has got to be deGrom’s biggest Cy Young threat…. 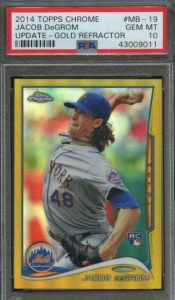 Topps Chrome leads the way when it comes to true RC options. It’s also a set you should be focused on if you’re looking to dump some serious cash into this endeavor as there are a few to choose from when it comes to cards valued at over $1,000. We recommend that beautiful Gold refractor above that currently sits at around $2,700 for a PSA 10 if you’re REALLY looking to go big. However, if you’d like something a bit more casual, seek out the base card or the Black refractor as both are available for less than $500. 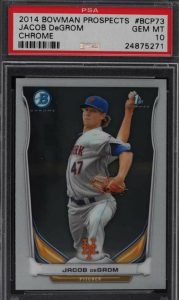 It’s rare that you see the biggest prospect card made in the same year as the true RCs, but that’s the case when it comes to Jacob deGrom rookie cards. And by far the biggest prospect card on the list is the 2014 Bowman Chrome. There are all kinds of great refractor options and even some quirky little “mini” parallels. If you’re looking to get buy on the cheap you’ll need to seek out one of those minis or a non-graded base card. 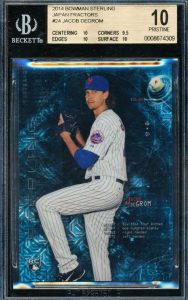 This card has a unique background and also displays deGrom’ss height and weight in the bottom right portion of the card. While we prefer the Japan refractor shown above, there are a few other options that won’t cost as much. Overall this is a moderate to casual investment card with prices ranging from $500 to $50. 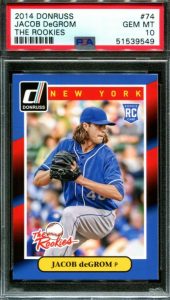 Next, we have the rare Jacob deGrom rookie card from Donruss that was not initially featured in the main set but only the expansions, making it harder to find. There are also autographed versions of this card that are interspersed throughout the packs so be on the lookout for those if you go and buy some old unopened boxes. Looks-wise, this is BY FAR our favorite on the list. It features an old school design with the RC logo at the top and the famous Donruss “The Rookies” logo at the bottom. What more could you want? Prices range from $1,000 down to $100. 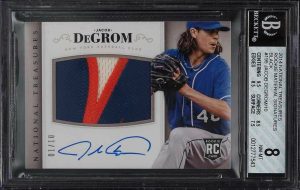 Last but certainly not least is a card from National Treasures that features both deGrom’s signature and a piece of his jersey. These cards are some of the rarest Jake deGrom rookie card options on the market with print runs ranging from 99 down to 10 depending on the parallel. While National Treasures isn’t known for its valuable baseball cards, this one is an absolute BEAST when it comes to dollars. Heck, even a BGS 8 grade card of the /10 variation sold for $1,200 recently on eBay. And honestly, we’d only expect the prices to continue their upward march in the years to come.

A whole lot of things. As with all players, how they are performing at the moment plays a big role. However, what plays an even bigger role is the rarity of the card. For instance, autographs and refractors show up far less than your common base card so they are far more expensive in most cases. And let’s not forget about the card’s condition. Even a common base card with a PSA 10 label can be more valuable than one of those rare refractors if the refractor is in less than mint condition.

Trending Rookie Alert: Pick up one of these Jazz Chisholm rookie cards while they’re hot!

If deGrom shrugs off that lat inflammation and returns to full health in short order you’re investing in a guy who’ll be the favorite to win the Cy Young. But even if he doesn’t win the award, another amazing season will have you in a good position by the end of the season. Either way, there should be money to be made. 8/10

If that injury develops into something more serious, consider finding a buy-low opportunity and holding a couple of years. The fact that he only seems to be getting better at 32 years old has to make you confident he has plenty of mileage left on that arm. Just two more Cy Youngs and he’s tied for the 3rd most of all-time behind just Randy Johnson and Roger Clemons. If he grabs another one or two within this time frame expect BIG upward movement. 9/10

The way he’s been pitching we’d be surprised if he didn’t get 1 or 2 more of those Cy Youngs. And if he does he’s a lock for the Hall of Fame. He probably will be even if he doesn’t! Going long on a Hall of Fame-caliber player is usually NOT a bad idea. 8/10