While the hobby is mostly focused on offensive players, the best defensive players in sports can still make an impact. And if things go like the Dolphins hope, Jaelan Phillips will be one of those players. Miami snagged the defensive end with the 18th pick in the draft after a nomadic college football career. Phillips spent his freshman and sophomore years playing for the UCLA Bruins but would transfer to the Miami Hurricanes for his final season. Safe to say that transfer was the right decision. In just 10 games in the 2020 season, Jaelan Phillips had 45 tackles, 8 sacks, and one interception. He also deflected 3 passes and made 45 tackles with 15.5 of those ending in a loss of yards. As you can see, Phillips made a BIG impact playing for the school in which names like Ray Lewis and Ed Reed still ring out through campus. If he can follow in the footsteps of those legends, a Jaelan Phillips rookie card will certainly be a worthwhile investment.

Phillips had some monster games in which he made it known he was worthy of playing at the next level. In a 19-14 victory against Virginia, Phillips led all defensive players on the team with 7 tackles. In the following week, he would lead the team with 10 tackles with 1.5 ending in a loss of yards. A performance that helped the Hurricanes squeak by North Carolina State 44-41. Additionally, Jaelan Phillips had a stellar game against Virginia Tech. In an effort to remember, Phillips handed out 8 tackles along with 2 sacks to propel Miami to a narrow 25-24 victory.

With performances like these, it’s no wonder why NFL scouts were impressed with Jaelan Phillips. If he impresses his new NFL coach Brian Flores in the same manner, you’ll be happy you decided to pick up one of the following Jaelan Phillips rookie cards!

Panini Prizm has a variety of cards with Phillips on the front. However, one that really stands out is the beautiful “Blue Ice” Prizm. The autographed version shown above has a print run of only 75 and is available for less than $50. Talk about a bargain! In the image, Jaelan Phillips is seen displaying the football proudly while doing a high step. One can only assume the photo must have been taken after a play in which he successfully recovered a fumble. At this price, it sure seems like a MUST OWN CARD. 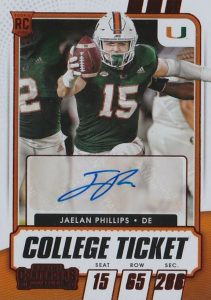 Panini must have been very impressed with that fumble recovery photo because Contenders features the exact same base card photo as Prizm. Yikes! At any rate, the Jaelan Phillips rookie card shown above has a white outline at the top and also includes Phillips’ autograph. This is merely a signed version of the base card and is available for just a few bucks. A great play for casual hobbyists. 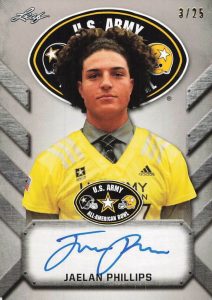 The oldest Jaelan Phillips rookie card on our list is from 2017 and commemorates the Army All-American Game. It has a print run of 25 and includes Phillips’ autograph under a profile image of Phillips wearing a yellow All-American jersey along with a semi-serious expression. Another great play for under $10. 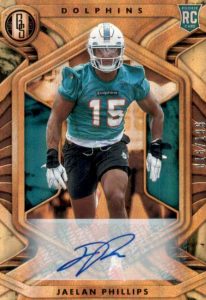 A newly released collection that is bringing the heat. Or the gold. Or both. Either way, it’s a high-end set of cards with some nice first-year Phillips cards. Take the one above, for instance. A practice session image of Jaelan getting prepared for life in the pros. It comes with his autograph and sits at around $10. A no-brainer, especially if you’re looking for a card featuring Miami’s talented rookie in his brand new Dolphins jersey.

Phillips is just a rookie and he will show it at times in 2021. In other words, don’t be surprised if it takes some time for Phillips to get acclimated to life in the NFL. However, the kid is full of talent and should emerge as one of the game’s best pass rushers over the next few years. Be patient and be rewarded!