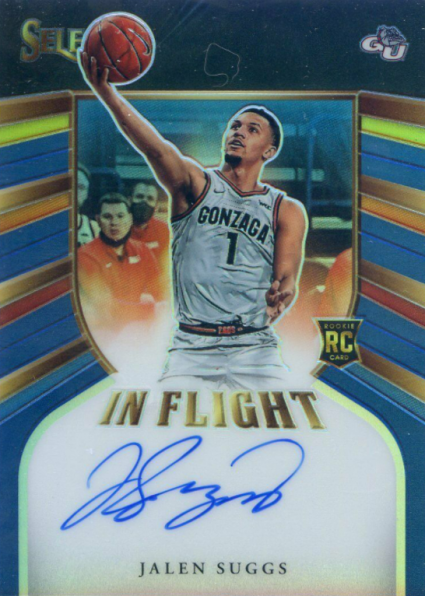 If he can carry the success he experienced at Gonzaga into the NBA, safe to say there will be collectors lining up at the door for a Jalen Suggs rookie card. In his one and only year in college at Gonzaga, Suggs led the Zags to a number 1 seed in the playoff tourney before falling in the finals to Baylor.

While Suggs certainly pulled his weight in the playoffs, he was a workhorse all year long for the Zags. The freshmen from Hawaii played 28 mins a game and averaged more than 14 points in those contests. Additionally, Suggs game through with an average of more than 4 assists and 5 boards per game. Clearly the catalyst for one of the best regular-season squads we’ve seen in some time. And with an Orlando Magic team that isn’t too far off, we’re excited about his first year in the NBA. If you share that sentiment, here are some early Jalen Suggs rookie card releases to consider!

Which Jalen will make more of an impact next season…. 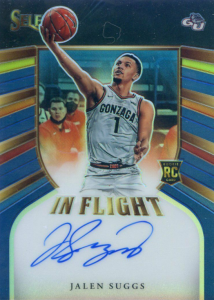 When it comes to sweet inserts, it’s hard to beat the “In Flight” line from Panini Select. Now you may be thinking, why on earth are we talking about Panini Select when the title above clearly says Panini Chronicles?? And doesn’t Select arrive way later in 2022? Both would be great questions! You see, Chronicles offers a variety of cards from among many Panini’s big name lines. Therefore, you can expect to see sweet cards from Mosaic, Donruss, Certified, and more in the Chronicles collection. How’s that for a jack of all trades??

Anyways, the card above is one of the finest Jalen Suggs rookie cards you’ll find at the moment and is valued at more than $200. If you’re not afraid to drop $50 or more on an up and coming rookie, Chronicles is your best bet of all the sets that have been released so far. 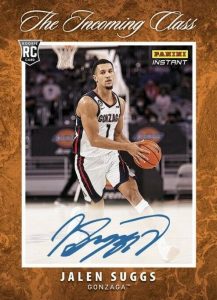 The collection gets its name for its INSTANT delivery of rookie cards each season. And with this new crop of rookies, there sure is plenty to be excited about. As far as Suggs goes, be on the lookout for incoming class autographed inserts that are already on pre-sale. Get in early enough and some big-time profits could be in your future. In addition to the inserts, there are plenty of less expensive options. 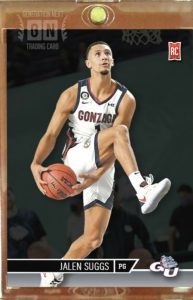 An obscure collection that focuses strictly on players who are part of the newest patch of NBA hopefuls. Jalen Suggs certainly fits that description. Here Suggs is featured going up for a between the legs dunk. Let’s hope he isn’t about to be rejected by the rim. At any rate, these will set you back next to nothing so load up! 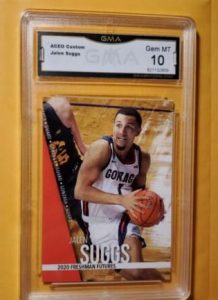 You’ll see some of these floating around out there in the early Jalen Suggs rookie card market. It’s the earliest card we feature on the list and is worth taking a peak at especially if you want one graded. The GMA 10 grade shown above is floating around for less than $60.

By most accounts, Suggs is a Top 3 pick to win Rookie of the Year. Something that should make you all the more confident in picking up a few Jalen Suggs rookie cards. If the kid can deliver on those high expectations you’re sure to come away from this endeavor looking good. Especially if you purchase your card before the season begins. Because once the train leaves the station it can be really hard to get back on! 7/10

Just like with number 2 pick overall Jalen Green, Suggs will be playing for a team in the Orlando Magic that can compete ASAP. Something that should make you comfortable taking a multi-year investment approach. You may be faced with a tough decision if individual success comes sooner than team success, but that’s a great problem to have! Invest with confidence. 7/10