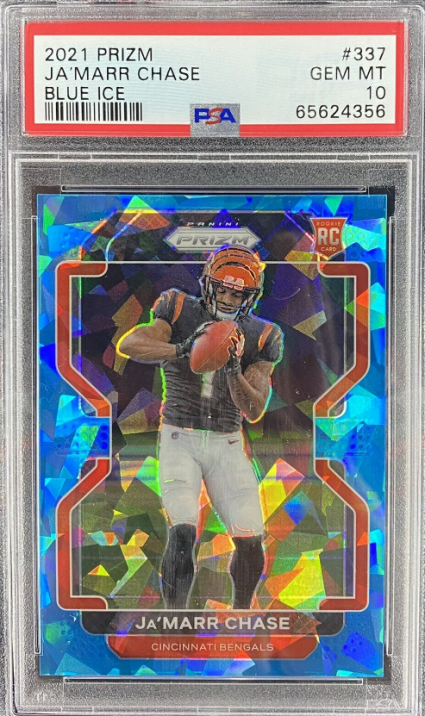 While the top Ja’Marr Chase rookie cards didn’t receive as much attention as those of the 2021 rookie quarterbacks, they sure did a great job of catching up by the end of his first season. As you know Chase did everything asked of him and more his rookie season.

This high level of play should come as no surprise as the speedy wideout made a huge impact in his only full season at LSU. That year he not only led the country in receiving yards and touchdowns but also earned the honors of being named the country’s best receiver and took home the Fred Biletnikoff Award. Of course, he had the help of Joe Burrow and that unstoppable LSU offense. Even so, the 1,795 yards receiving and 20 touchdowns speak for themselves.

Call it wishful thinking, but we’re expecting the hopes of Bengals nation to be rewarded with a Super Bowl. And when that happens, you’ll be glad you owned one of the top Ja’Marr Chase rookie cards. Hopefully more than one! 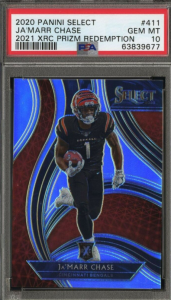 The recent arrival of the Panini Select XRC collection offers some the best Ja’Marr Chase rookie cards we’ve seen so far. It’s one of the brand’s best sets and features a variety of cards of Chase that have already sold for well over $500. Looking to spend even more? No problem! Some of the rarest cards in the set are valued at more than a whopping $3,000. If you’re hoping for a more modest purchase try seeking out a base card or one of the more common Prizms. 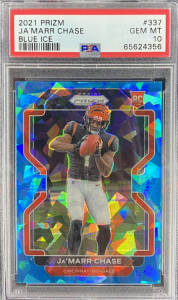 The 2021 Panini Prizm collection has finally arrive and boy does it back pack a punch. Here you’ll find the BEST Ja’marr Chase rookie cards the industry has to offer. Something that doesn’t come as a surprise when you consider it’s the best set in the game.

The card above is the beautiful Blue Ice prizm. While Chase is hauling in a long touchdown pass, we all know what he’s capable of AFTER the catch. Somehow we thing he’ll turn that little out route into a MASSIVE gain.

In addition to the card above, there are plenty of other great prizm options to sink your teeth into. Perfect options for collector’s with deep pockets. Meanwhile, casual hobbyists can pick up a base card without breaking the bank. 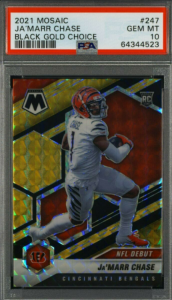 Just like Chase, Mosaic is a card that simply get’s it done. While not as flashy or sought after as some of the bigger name collections, Mosaic offers incredible value for a card that comes out of the pack in such good shape. Crispy, stylish, and firm the cards represent a nice haircut over the price you’ll pay for Prizm or Select. In addition to the good looks, Mosaic offers brings the heat when it comes to variety. You’ll find a wide assortment of options including autographs, rare parallels, and one of a kind inserts. All in a set that has an extensive base check list loaded with the league’s top talent. Chase sure proved himself to be in that category in 2021. 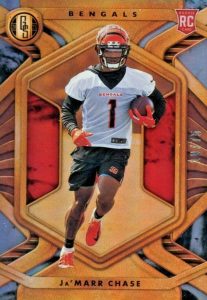 Finally, a Ja’Marr Chase rookie card featuring the explosive young receiver in his new Bengals uniform. Gold Standard has been given its name for a reason as its sets the bar incredibly high. As you can see the recently released collection is fond of Gold when it comes to the style of its cards. The card above has a print run of 75 and makes for a nice casual investment for less than $50. However, if you’re looking to throw more into your investment there are plenty of great autographed options from this set that you could easily sink a few hundred into. 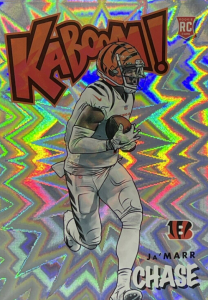 It seems like EVERYONE wants a piece of the KABOOM insert nowadays. And we can’t blame them. As cool as the card looks, it’s even more valuable. While this is the big dollar card from the collection, there are plenty of lower priced options to consider including some affordable autographs and even some tandem cards with Joe Burrow. 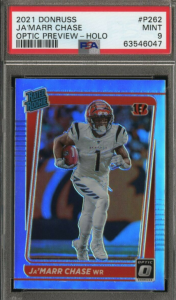 The wait is over and boy are we happy with the Ja’Marr Chase rookie card options in this year’s Donruss collection. Take a look above and you’ll find the Optic Preview glimmering in all its glory. In addition to this card, there are plenty of other moderately priced parallels such as the Red/Green and Silver varieties. Not the set to focus on if you’re after and autograph but a true heavy weight nonetheless. 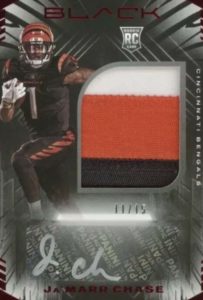 There isn’t a whole lot of options for an autographed Ja’Marr Chase rookie card at the moment but the ones we do have are quite enticing. Especially Panini Black. The collection is loaded with high-end items and has quite a few that feature Chase’s signature. Whether you’re looking to spend just a few hundred or more than $1,000 you’ll have no trouble finding something that meets your needs. The card shown above is /15 3 color patch that holds a value of somewhere around $300 ungraded.

As you can see many of the sets features here include cards with Chase’s autograph. While these cards tend to be more expensive there are plenty that casual hobbyists can afford. So don’t let the ink fool you! That said, if your goal is to get as much money into you’re investment as possible the signature is oje of the first things you want to look for. 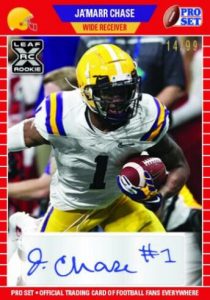 With this card we see Chase running into the end zone presumably for a touchdown. He is donning his number one jersey at LSU while also stiff-arming a defender into oblivion. The card art makes for a very cool and unique image which is sure to add to the popularity of his card. We like the autographed version shown above. While only 99 exist in the world, you can still grab one for right around $200 at the moment. If you see one floating around for that price don’t hesitate to buy it! 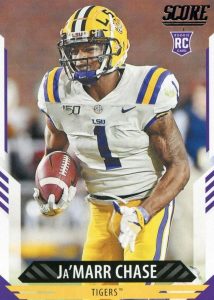 There are a few different image variations of this Ja’Marr Chase rookie card with the most common version shown above. Also, be on the lookout for an NFL draft version, and a Hot Rookies insert. In our opinion, the Hot Rookie insert definitely looks the coolest of the three options as it has the flames in the background (gotta love the dramatics). The NFL Draft card isn’t bad either as it commemorates the first-round pick with a draft logo on the left-hand side of Chase’s image. Of course, the standard version ain’t bad either if you’re a fan of the traditional. These are far more affordable than the Pro Set collection with many gems available in the $10-$50 range. 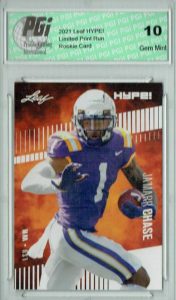 For the final version, we have the Leaf Hype Note. There is a sweet fire-like background to the card with Chase in the forefront running downfield as he prepares to stiff-arm another defender into oblivion. While the defender has been cropped, we’d have to imagine they’re gonna have to journey into another dimension to find the poor guy after that one! Cost-wise this is a true bargain-basement play as even grade 10s like the one above are going for just $20 bucks. If you’re looking to spend more try going for a /5 or even the lone /1 as these will cost you over $50. 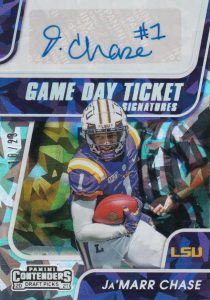 If you’re only going to buy one Ja’Marr Chase rookie card this year nobody would blame you for making it a Contenders Draft. We recommend the “Game Day Ticket” autographed card for between $150 and $300 depending on the parallel. However, if you’re into inserts you could do a lot worse than a Campus ID. 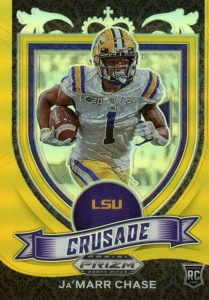 Last but not least we have the most robust collection of Ja’Marr Chase rookie card offerings we’ve seen so far. Year in and year out Panini Prizm brings the heat and 2021 is no different. The “Draft Picks” collection features all of the most exciting draft picks from the most recent draft and you can be your bottom dollar Ja’Marr Chase is one of them. There are many Chase rookie cards available but we love the “Crusade” insert shown above as a nice casual pick-up. 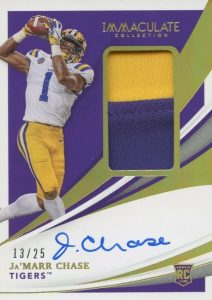 It’s hard to beat Panini Immaculate if you’re looking for a top-of-the-line football card. And how top-of-the-line can a card be if it doesn’t come with the player’s autograph? As you can see from /25 card shown here Immaculate has it covered. In addition to the card above, there are plenty of other auto options in this collection so if you’re looking to spend a little less or a little more you should be able to find one that fits.

As we eluded to earlier, we love what a reunited Chase and Burrow have done to opposing defensive backfields so far. Sure, we aren’t seeing those video game-like LSU numbers they put up in their National Championship Season, but they are getting awfully close. As of right now, it certainly seems like Ja’Marr will end up being a top 3 if not THE top receiver in the league for years to come.

Now that he’s settled in as one of the league’s top receivers, fans are already being treated to flashbacks to the days of old with the same chemistry between Chase and Burrow at the professional level. If you’re a Bengals fan you have to be thrilled by what these two have accomplished in their young careers and should be hopeful even better things are yet to come. Especially since they’ve finally broken the long standing losing tradition that once plagued Cincinnati.

Long term, the sky’s the limit.