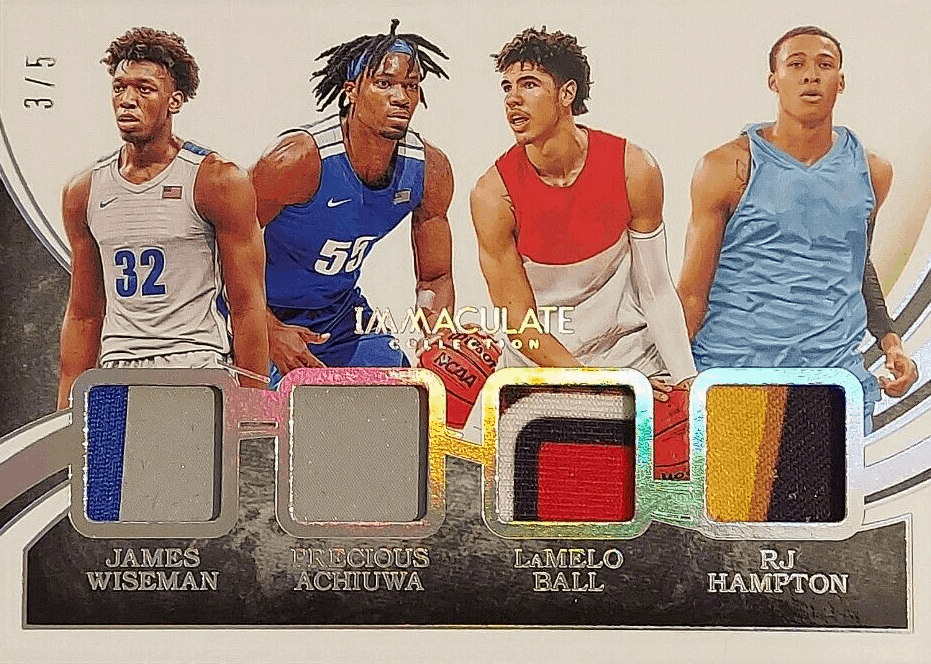 While the regular James Wiseman rookie card options are still in assembly, there are plenty of pre-season or Draft Pick cards available. Thanks to Panini, NBA fans can get their hands on cards featuring what should be the most impactful rookies from the latest draft. One is almost certainly going to be James Wiseman.

In what could have been an explosive Freshman season at Memphis in 2019-20, harden ended up playing just 3 games due to a suspension that upended his year. However, in those 3 games, Wiseman did nothing but PRODUCE. The gargantuan 7-foot 1-inch center obliterated defenses to the tune of 19 points, 3 blocks, and over 10 rebounds per game in that brief stint.

And while the suspension cost fans an exciting season, it DID NOT cost Wiseman much slippage in his draft position. If any. James ended up going 2nd overall and is now one of the favorites to win the 2020-21 Rookie of the Year award after an incredibly solid start to his rookie season. So as you would imagine, a James Wisman rookie card investment is something many collectors are now considering as we get into the full swing of the 2021 season. Here are a few options if you happen to be one of them!

Let’s not forget about the FIRST overall pick in the draft! Check out our Anthony Edwards rookie card guide! 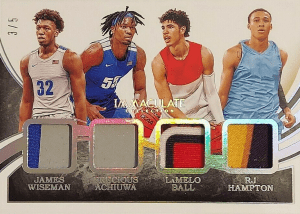 We’ll start with one of the lesser-known sets from Panini.  Immaculate is one of the earliest sets you’re gonna find that includes prominent rookies for the upcoming season. And while it’s one of the earliest to the market, that doesn’t translate to expensive prices. Plenty of great investment pieces available from this collection for under $100. We love the card shown above. 4 first-round picks for the price of one! 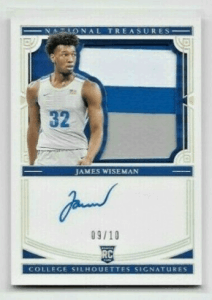 A first look set from National Treasures that features some incredibly James Wiseman rookie card options. There are two Wiseman-only Relic cards we have our eye on. The one above shows Wiseman glancing over towards the bench. Meanwhile, the horizontal version features Wiseman looking straight ahead, eye on the prize. In addition to these, there are several multi-player mash-ups to check out. Most notably the one with Rookie of the Year favorite LaMelo Ball.

As far as value goes, these are at complete BARGAIN prices compared to what you’ll see when this year’s National Treasures flagship set rolls out. A great starter investment option. 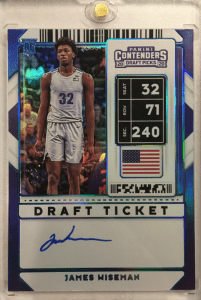 Now we get into the price range of the more serious investors. Many great options over the $1,000 mark. The one above is a Draft Ticket 1/1 that recently went for nearly $2,000 on eBay. In addition to that, you’ll find no shortage of glitzy Prospect Ticket cards amongst others. 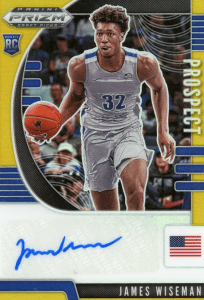 Another great option for those of you who are looking for a larger-sized investment. Prizm Draft is always a forerunner set to the much-awaited Panini Prizm Basketball release and this year it’s jammed packed with electrifying rookie talent. Many rare and valuable cards over $1,000.

NHL Rookie of the Year Alerts!

All of the options we’ve laid out include cards with James’ signature. As you know an autograph usually increases the value of the card so be prepared to spend a little extra if you want one. In many cases, it’ll pay for itself! 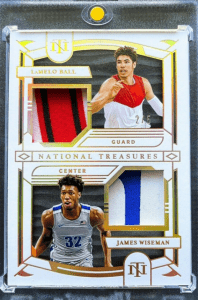 Given the amount of hype, Ball has received, this is actually closer than you’d think. However, LaMelo does have the edge. For example, one incredibly relevant comp we can point to is a recent sale of each players’ 1/1 Panini Flawless Collegiate Patch AUTO. Ball’s sold for a little over $10,000 while Wismena came in at around $7,000.

While LaMelo is getting the hype, Wiseman is flying under the radar in comparison. While he’s not a potential triple-double machine, Wiseman is doing everything you want to see out of a first-year center as far as points and rebounds go. We have a feeling that’ll only get better. Plus unlike LaMelo, there’s still plenty of people hitting the ole’ snooze button on Wiseman.

At the end of the day collectors like the excitement. Just take a look at 2020 MLB MVP Freddie Freeman’s rookie card value compared to that of say an unproven Fernando Tatis Jr. Tatis is by far the winner in value.

Without a doubt Tatis is more exciting, but who would you trust in more to deliver a big season in 2021? Easy answer for us. The same applies here. When it comes to BIG profit potential, we’ll take Ball hands down.

Wiseman has “star upside” according to some scouting reports, and plays on a team that’s among the favorites to win it all. Combine that with a chance at Rookie of the Year and you have yourself plenty of reasons to be interested in a short-term investment here. 9/10

While he has massive upside, you never know what you’ll get out of a 19-year-old NBA rookie. For that reason alone we’re a bit hesitant to tie-up part of the bankroll in an investment approach that’s longer than 1 season. That said, there’s a great chance James will have us singing a different tune come this time next year. 7/10

Let’s stick to the short or medium-term approach for now. Just like we said in our other NBA rookie card reviews below, way too early to go here. Enjoy what should be some great price action leading up to the season and see where it takes you! If all goes right you’ll have plenty of time to consider rolling your James Wiseman rookie card profits into a potentially lucrative long-term play.

Don’t forget about these other NBA Rookie of the Year candidates!