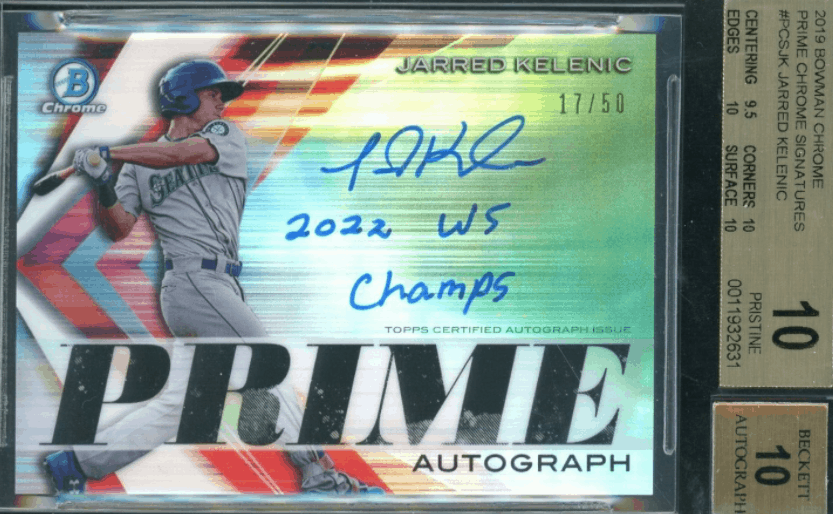 If you recently heard the news about his imminent call-up and are thinking about picking up a Jarred Kelenic rookie card it’s important to know a little bit about the young career that’s responsible for all the much-warranted hype. Let’s take a look!

As a former top 10 draft pick, it’s not like Jarred Kelenic came out of nowhere. However, things didn’t get off to the fastest start for the teenager. In his first taste of professional ball in 2018, Kelenic had what could be described as an okay, but not great, season. And perhaps that’s what kept him under the radar for both fantasy owners and card collectors alike. And apparently for the Mets who traded him and fellow prospect Justin Dunn for the declining Robinson Canoe and Edwin Diaz (OUUUUCCCCH!).

In fact, it wasn’t until 2019 when the Mariner’s top prospect started to become a household name (well at least for households full of prospect junkies). In 443 at-bats across 3 different leagues, Kelenic slashed .291/.364/.540 to go along with a .904 OPS. Oh, and he also hit 23 home runs and stole 20 bases. Those numbers propelled Kelenic as one of the most coveted prospects in the MLB, within fantasy baseball circles, and most importantly within the card collecting community.

This brings us to 2021. Kelenic wasted no time in his efforts to outclass MILB pitching by hitting .370 with 2 home runs over his first 27 at-bats in AAA. As we mentioned early, that was apparently all the Mariners needed to see. And if you’re looking to pick up a Jarred Kelenic rookie card, here are some that YOU need to see.

He may be a year or two off but he’s as highly regarded of a prospect as Jarred Kelenic….

By far his most collectible rookie card, the 2018 Bowman Chrome Jarred Kelenic has seen quite the increase after the breakout 2019 season. There are almost too many versions to count, but if you land one with an autograph and a refractor tag (especially the orange one), you’ll be doing just fine.

As far as value goes, that Orange Refractor we just mentioned is approaching $5,000. More common Refractors and base cards are the way to go if you don’t want to lay that kind of cash. 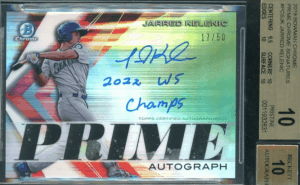 A card that showcases Kelenic is his new uniform. It also represents his MONSTER 2019 of a season. Of course, it’s a year older than the 2018 version so the value isn’t going to be as high. On the other hand, it won’t cost you as much to pick one up either! 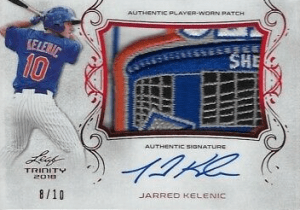 While this card is certainly not the most valuable, it’s by far the coolest (in our humble opinion). Who wouldn’t want a piece of a player worn fabric included with their card? Oh, and by the way, it also comes with Kelenic’s autograph.  In terms of the WOW factor, this card beats the glitzy Bowman Refractors any day. 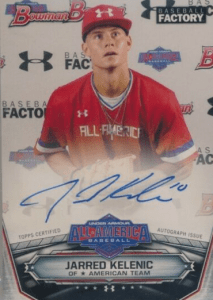 As far as Jarred Kelenic rookie cards go, this one takes it WAY back. Heck, just look at that wide-eyed upwards gaze and high school All-American uniform! However, even though it may be one of his first rookie cards, it’s FAR from the most valuable. Which makes it a good option for those who aren’t ready to move all-in quite yet. 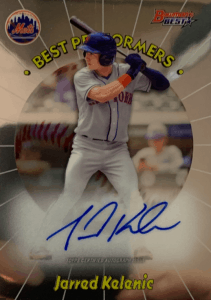 A simple card that is similar in appearance to the Bowman Chrome Mike Trout rookie card. Turn Jarred to the other side of the plate and you might not be able to even tell the difference (that’s a stretch but you get the point). Anyways, if Jarred goes on to have a career similar to Mike Trout’s, needless to say, you’ll be happy you bought this card. 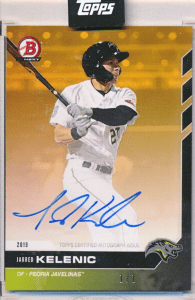 Doesn’t quite crack our Top 5 but we feel the need to give this card some love regardless. A great glimpse of that soon-to-be-famous follow-through and a black and orange color combo that really pops. There are a few different parallels including the elusive only one in existence version you see above. Overall these cards don’t draw the attention like their Chrome ciounterparts but a nice little card if you don’t want to spend what it takes to bring in the Chrome. 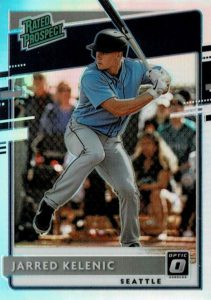 A card that perfectly illustrates Kelenic’s Matt Holiday-like leg. In addition to the photo, this Jarred Kelenic rookie card from Donruss offers a variety of parallels and in general, is incredibly affordable. So if you have a wait-and-see type attitude perhaps a low-risk investment here could make some sense.

As you can see just by looking at the photos in this post, most of Kelenic’s rookie card options come available with an autograph. So if you’re looking to go big on this investment opportunity you’d be doing yourself a disservice if you didn’t grab at least a couple with Jarred’s signature. Overall, that 2018 Bowman Chrome with an autograph is your best bet if you can afford to shell out the dollars.

Here’s a hitter we like even better than Kelenic!  Brace yourself for an Alex Kirilloff rookie card bounce back.

This is a five-tool player who, at age 21, isn’t even close to a household name yet (again, with the exception of all those rabid prospect hounds out there). However, now that there’s news of his call up we’re already seeing a big increase in interest in Kelenic’s rookie cards. Hence the price is sure to be going up with every passing day leading up to his debut. We’d take a wait-and-see approach now that he’ll be facing big-league batters. If he stumbles out of the gate and prices tumble take advantage of that HUGE buying opportunity. Either way, there should be short-term profits to be made if you play it right. 8/10

This strategy depends greatly on whether or not you think Kelenic will live up to his lofty prospect status once he hits the big leagues. While it’s a tall order to hit right out of the gate (not even the great Mike Trout was able to pull that off), we’re incredibly confident at some point over the next few years he’ll be doing to MLB pitchers what he did to those in the minors. Once that happens, watch out! 9/10