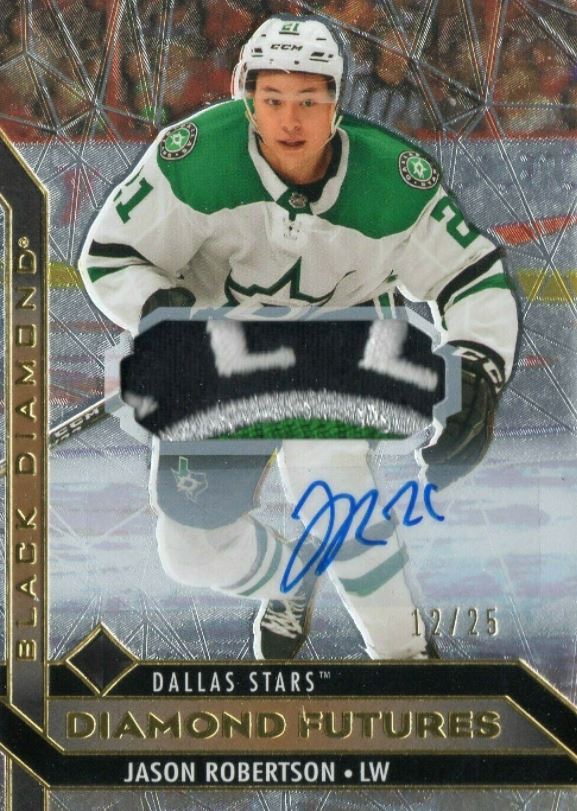 Due to the large shadow of NHL Calder Trophy favorite Kirill Kiprizov, the thought of a Jason Robertson rookie card investment may not have crossed your mind yet. However, if you haven’t heard of the Stars’ rookie left-winger, you might want to become more familiar! He is not only one of the best rookies in the NHL, but in April he was arguably one of the best players in the league. Period. A month Jason Robertson just so happened to win Rookie of the Month honors. Let’s take a deeper dive into the numbers to help explain his dominant rookie season performance.

Through a total of 47 games this season, Robertson has 42 total points, which is slightly better than ROY rival Kirill Kaprizov. He also has the edge over Kirprzov on plus/minus with plus 14. When this kid is on the ice things happen! And let’s not forget the flare for the dramatics. Even as a rookie Jason Robertson has scored 2 game-winning goals for the Dallas Stars, so it is safe to say that he has no problem handling the pressure. And while not quite the goal scorer Kirprisov is so far, he’s held his own with 16 goals. By the way, 8 of those were in April so it appears Robertson is just now finding his groove. Bottom line: you’ll want to add at LEAST one of the following Jason Robertson rookie cards to your collection! 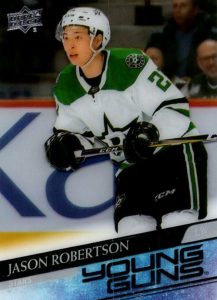 If you know anything about NHL rookie cards, you likely know Upper Deck Young Guns pretty much lead the way. Sure, you’ll find some cards that may be more valuable here and there, but none as popular AND as valuable. The combo is important. To but things simple, Young Guns is what you’re looking for.

As far as the layout goes, sometimes less is more. And that is true in this case. As always, a signature is something that can bring up both the value and the visual appeal of the card so if you’re looking to lay down a decent amount on something that will look great in your collector’s case, you know what to do. In fact, the autographed option may be the best way to go because if Roberston keeps up the hot streak the rest of the season you’ll want as much cash into this as possible! 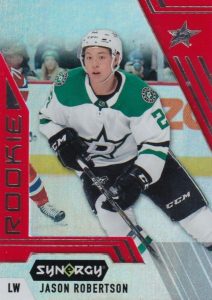 One of the things that makes this card so great is the many different options. We don’t even mean parallels, there are so many different image variations and inserts that it makes your brain hurt. Try to focus on the parallels of the base card like the red SP shown above that you can still pick up for less than $50. However, if you’re are looking for something with a little more flash, try getting your hands on a star quest parallel which has the card cut into a star and also happens to be a card that Jason Robertson has signed. Either way, most options from this set are suitable for casual investors who are looking to spend less than $100. 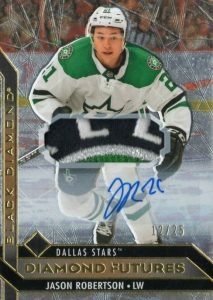 We can’t help but love the name as it combines our favorite two winter sports. At any rate, the name isn’t the only thing we love about this card as it’s one of the highest-valued Jason Robertson rookie card options you’ll find on the market. For instance, some of the rare autographed cards from this collection are selling for more than $500. There are also plenty of options out there in that moderate $200 price range. Get it done! 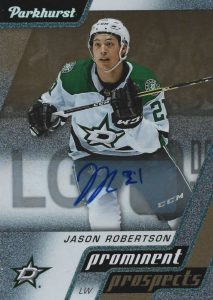 Now, here is a card even the most casual of collectors can afford. There are all kinds of options available for less than $20, and that includes cards WITH Jason Robertson’s autograph. Keep in mind that the /5 Green Emerald is lurking out there somewhere so if you do want a Parkhurst that is valued at over $50, keep your eyes open for it! Either way, even the Green Emerald option is far less expensive than the Young Guns or Black Diamonds we featured above so again, casual investors START HERE.

Related: Most Valuable Hockey Cards From the 80s

Robertson’s hot April appears to be extending into May as he already has a goal in his first two games of the month. If the Stars somehow make the playoffs and he continues the hot streak into the playoffs you’re going to see some action. But even if that doesn’t happen, it looks like Robertson will be at the very least the runner up for the Calder with an outside chance to win it. Plus we wouldn’t be surprised if he left off right where he did next year. 8.5/10

We’re really excited about the first month of next season. If Robertson shows his play down the stretch is here to stay you’ll be looking at one of the most exciting players in the league every time you take a glance at you’re Jason Robertson rookie card. And we’d love to see where that excitement takes us over the next few years. 8/10