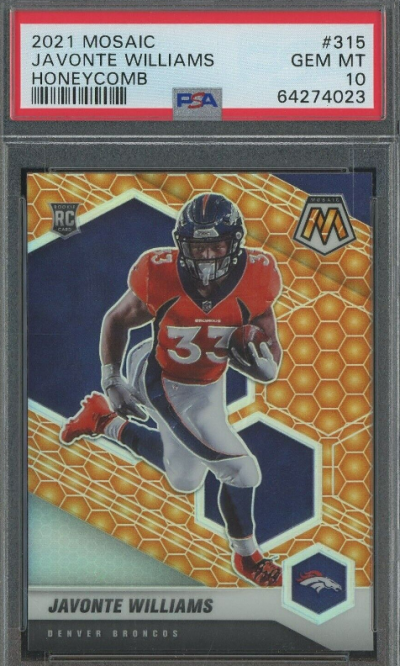 With many believing it only to be a matter of time before he takes full control of Denver’s rushing attack, perhaps it’s time to consider picking up at least one of the best Javonte Williams rookie cards. While only time will tell on when that will happen, it’s easy to see why it’s inevitable.

Williams had himself a stellar collegiate career as a running back for the North Carolina Tar Heels. So much so that he was drafted early in the 2nd round of the 2021 NFL Draft by the Denver Broncos. A team that is surely hoping Williams is about follow in the footsteps of other UNC alums such as Robert Quinn and Eric Ebron and go on to have a solid career in the NFL.

And so far we can’t help but like the direction things are going. If things continue to progress you’ll be glad you picked up a Javonte Williams rookie card or two. We’re about to highlight a few of those cards but first, let’s take a brief look at what Williams was able to accomplish at UNC.

Javonte Williams’s college career really got going during his sophomore and junior years. For instance, he had 166 carries for 933 yards and 6 touchdowns after he began receiving consistent touches in 2019. After that in his junior year, Williams had 157 carries for 1140 yards and a whopping 19 rushing touchdowns.

When it comes to highlights, one of his first standout performances came in a sophomore season game against Georgia Tech where Javonte Williams had 20 carries for 144 yards and a touchdown. Another sophomore season highlight was a rivalry football game against Duke where the young running back had 22 carries for 111 yards and paced the Tar Heels to a 20-17 victory over the Blue Devils.

Not surprisingly, Javonte Williams would have even more highlights in his junior year. In an in-state rivalry game against North Carolina State, Williams had 19 carries for 160 yards and 3 touchdowns to help North Carolina roll to a 48-21 victory. Two weeks later against Duke, Williams would have 12 carries for 151 yards and 3 rushing touchdowns along with 4 receptions for 24 yards as North Carolina toppled Duke 56-24. As you can see Williams has star potential. Therefore, it may be a good idea to consider one of the following from our Top 5 Javonte Williams Rookie Cards list. 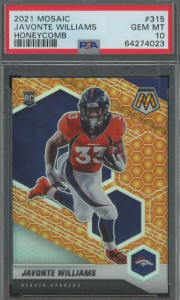 Our top pick for a those who are looking to scoop something up in the $500 range is the stunning Honeycomb Prizm shown above. A true spectacle to behold, the card shows Williams as he’s getting ready to run over a likely overmatched defender. In addition to the Honeycomb, the set is loaded with other moderately priced Prizms. Making it a collection that’s perfect for collector’s who want something nice but aren’t willing to spend the big bucks on Williams quite yet. 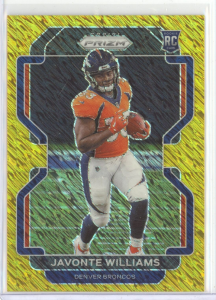 Collector’s who are prepared to spend some serious cash for one of the best Javonte Williams rookie cards should hone in on Panini Prizm. Whether you’re in the market for a rare Prizm or an lucrative autograph, it’s all here. We love the Gold Shimmer shown above. A rare card with a print run of 10 that is a true attention grabber. Other cards to target include the Green Shimmer, Gold Disco, and Gold Vinyl parallels. 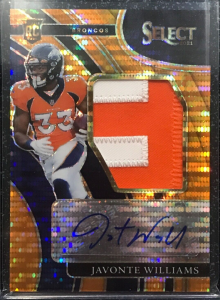 Right up there with Panini Prizm as far as quality goes, the first FOTL cards from Panini Select are starting to hit the aftermarket. And we love what we’re seeing. Whether you’re in the mood for some game worn material, an autograph, or a rare Prizm you simply can’t go wrong with this set. And let’s not forget about those base cards! Without a doubt some of the hottest Javonte Williams rookie cards available. 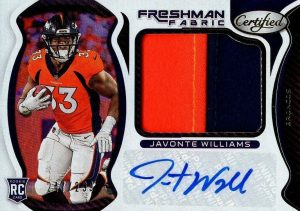 When it comes to early NFL releases, nobody does it better than Panini Certified. Sure, there may be some limited collections with a higher dollar per card value, but none of the early sets can offer the variety that Certified does. Whether you’re on the hunt for a small-time base card for a few bucks or a thousand-dollar signed autograph with some game-worn material, look no further. The card we’ve spotlighted above is a simple and crisp autographed Freshmen Fabric. It’s got a print run of only 299 and is still available for less than $100. A great casual to moderate pick-up depending on where your bankroll is at. 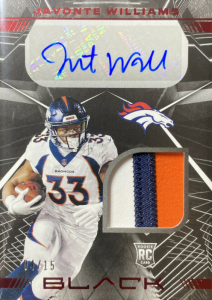 Certainly one of the best collections so far if you’re looking to score one of the best Javonte Williams rookie cards. Especially a valuable one. The set features a variety of rare parallels and includes cards with both autographs and fabric. The card above includes both and has a print run of just 15 making it one of the best Javonte Williams cards in the set. If you’re looking for something cheaper hone in on a card without an autograph or a higher print run as you shouldn’t have a problem finding one for well under $50. If Javonte keeps the momentum up from his 117 yard game against Dallas these prices may not be available for long! 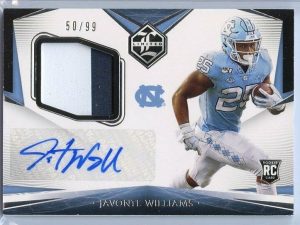 One great Panini Chronicles card is the “Rookies & Stars” insert. This card has a multi-colored layout that circles the picture showing Williams appearing in a confident pose. Likely after scoring one of his many rushing touchdowns at North Carolina.

A Javonte Williams rookie card we like even more than the Rookies & Stars insert from the 2021 Chronicles collection is the auto-patch shown above. It has a print run of just 99 and shows Javonte Williams as he appears to be angling his body towards a hole opened up by his offensive line. Even with the material and signature, this card is still available for less than $100. 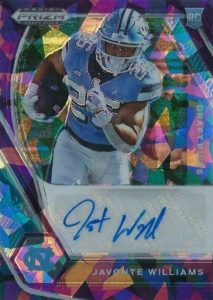 The “Purple Ice” parallel shown here has a color scheme that blends perfectly with Williams’s Tar Heels uniform. An autograph of Javonte Williams can be seen on the lower half of the card while the top half features a photo of Williams as he appears to be headed towards the end zone. The card has a print run of just 99 and makes for a great casual investment for somewhere in the $50 to $100 range.

Another great option is the spectacular ultra-rare Gold Prizm version. While the bottom of this card has blue teal, gold can be seen on the top and along the sides and really gives the card a great deal of prominence. It has a print run of just 10 and is easily one of the top 5 Javonte Williams rookie cards from his UNC days. 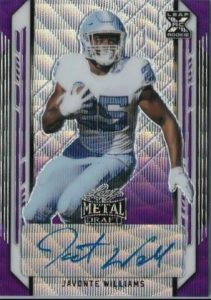 The Purple Wave shown above features a lower half that has a nice sophisticated design with the Leaf Metal Draft logo shown prominently above Williams’s signature. Meanwhile, the picture shows Javonte appearing to prepare for a sick juke while tearing up the turf in his Tar Heels road jersey. This collection is by far the most affordable that we’ve featured on our list as even cards as the /15 featured above sell for less than $50.

A short-term play is still questionable as Williams’ continues to share time with Melvin Gordon. While he’s seeing his fair share of snaps, card values won’t be driven to higher places until he separates himself as the king of the ground in Denver. However, an injury to Gordon or some huge games that lead to a full takeover of the featured back position could change things in a heartbeat.

We love this approach as this is where the potential for a breakout lies. At some point, Williams should get his shot to be the future of the Bronco’s backfield. If he succeeds we should see plenty of interest pour into the best Javonte Williams rookie cards. Something that would be a beautiful sight if you happen to be holding onto a few of the cards featured above.