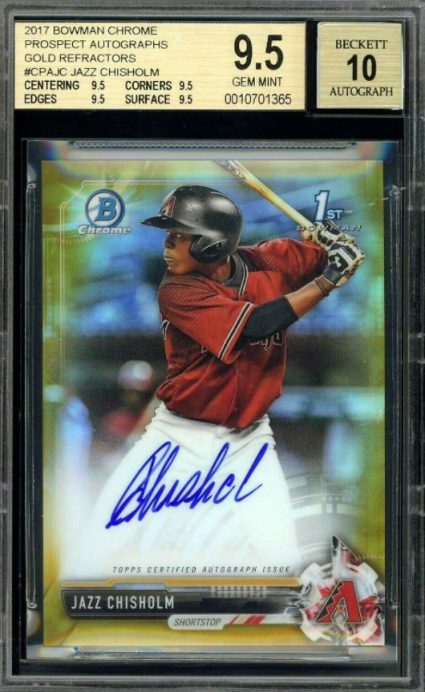 It’s safe to suggest that early investors may have been a bit disappointed with their Jazz Chisholm rookie card performance. If you’re one of them we hope you decided to hold instead of selling off after what you saw from his 56 at-bat cup of coffee in 2020 because things seem to be turning around nicely.

While his would be breakout season of 2021 was stalled by injuries, Jazz is showing that when healthy he is nothing short of a game changer. With each game, this electrifying young player is capable of producing something that ends up on a social media highlight tape. And if for some bizarre reason his play doesn’t catch your attention, Jazz Chisholm’s in-your-face neon blue hair will instead.

To get further into the numbers (which you very well know we LOVE to do), Chisholm’s first full season worth of at-bats (564) in the big leagues has produced 24 home runs, 29 bags, 74 RBI and 84 runs. True, his career average is lower than you’d like but his OBP would suggest better days coming in that department. Especially when you factor in the injuries.

As for Jazz Chisholm rookie cards, there are plenty of great options available. If he manages to stay healthy and keeps up the elite production, you’ll be glad you pounced on one. Here are a few of our favorites! 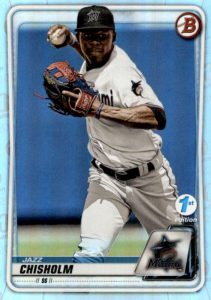 As we have mentioned with other cards in the past, sometimes keeping it simple is the best way to do it. And if simplicity is what you’re looking for, the first card on our list is something you’ll want to consider. No clutter or messy angles just a clean and crisp photo on Jazz getting ready to zing the ball back towards first base. We’re not seeing any autographs out there so you’ll need to get Chisholm to sign it yourself if that’s something you’re looking for. Hey, it’s worth a shot if you live in the area! 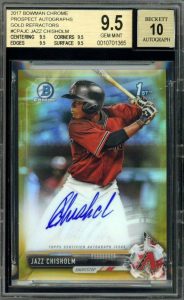 Next up we have Chisholm’s prospect card from the 2017 Bowman Chrome set. This is by far the most valuable Jazz Chisholm rookie card you’re going to find out there as some of the rare refractors can exceed $3,000. And unlike the last one, you can find this card with Chisholm’s autograph so you won’t have to worry about showing up to the game early and begging for his signature. 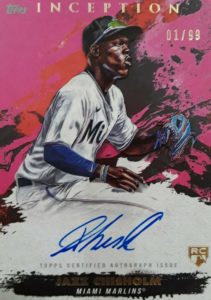 Topps Inception offers unique card art and a few different layouts so you’ll have plenty of options to choose from. Additionally, Inception includes cards with a piece of his game-worn jersey along with Chisholm’s autograph. These make for great moderate range investments as some of the most valuable out there are still hovering right around that $500 price. 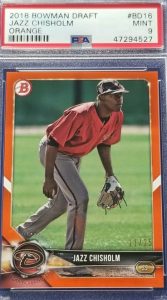 Since this card isn’t Chisholm’s first Bowman and also isn’t a true rookie card, it’s found floating around in the middle somewhere and often goes underlooked. However, you can certainly get incredible value here when compared to the other Bowman collections on this list. For instance, the /25 card shown above is valued it well less than $100. Try to get a Jazz Chisholm rookie card that’s that rare from the 2020 or 2017 collections at that price. Not happening! Strong value play. 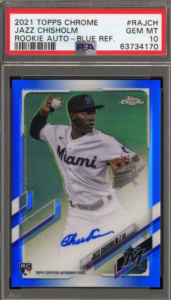 Another true Jazz Chisholm rookie card from Topps, the 2021 Chrome collection rivals the 2017 Bowman Chrome prospect card we discussed earlier. For starters, the quality is through the roof in this set. Additionally, there are plenty of rare and valuable refactors to sink your teeth into. Not to mention the variety of valuable autographed cards you can find. So if Bowman Chrome is king of the prospect cards, Topps Chrome is certainly king of the true rookie card market. At least in the world of baseball.

As far as value goes, these don’t reach some of the insane heights as Bowman Chrome. However, there are plenty of cards in the medium range price category that you can certainly invest quite a bit in.

While we’re skeptical that Jazz will become a .300 hitter, when healthy he’s shown that he’s capable of hitting well above the league average. That said, the power and speed are very real. So even if Chisholm’s average slides down to say the .250 area, the home runs, stolen bases, and overall exciting play should make up for it. If you’re looking to invest short term, your position will likely depend on whether or not Jazz suffers another injury. However, if you can stomach the risk a healthy season should pay off nicely. 7/10

It helps to remind yourself that Jazz is young and has plenty of room to grow as a player. If he develops more consistent contact ability and continues to display power and speed on the base paths you could see Chisholm emerge as one of the game’s top stars within the next few years. Sure there’s a decent amount of risk involved but the upside is huge. 7/10

As we’ve said, the one thing we’re a bit concerned about is the injuries. Jazz has found himself on the IL way more times than we’d like to see. Does this mean he’s going to be the next Giancarlo Stanton when it comes to injuries? No. Nonetheless, the IL stints are certainly something to be concerned about. The long term value of any player’s card relies heavily on being on the field for the vast majority of the games year in and year out. We’ll be waiting to see Jazz is capable of that before thinking long. 4/10