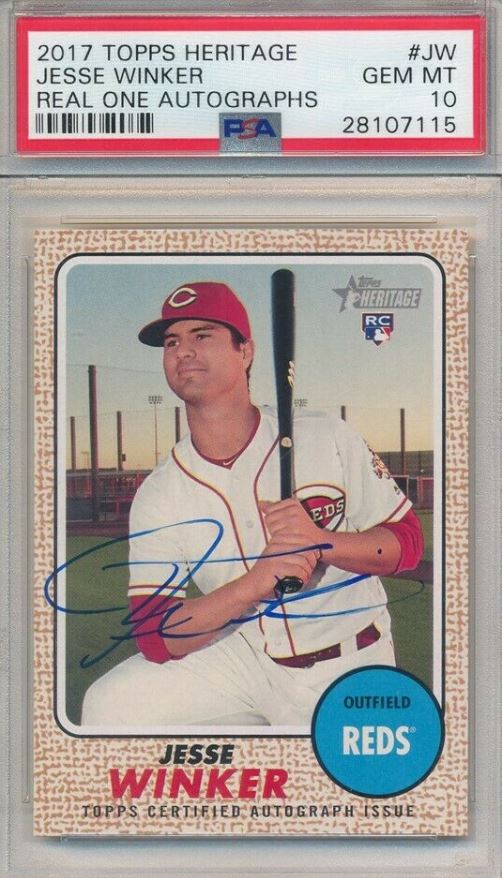 It took a while but the Reds’ breakout outfielder is finally making the Jesse Winker rookie card market worth paying attention to. In his age 27 season, Winker has made more of an impact than arguably any other player in the league so far. Hey, sometimes it takes a while for top prospects to blossom into superstars! But despite the long journey, a superstar is exactly what Winker has become.

Just take a gander at what Jesse Winker has accomplished so far this season. In 2021, Winker has already managed to achieve a career-high in home runs with 17. On top of that, he also has a career-high batting average at .335 along with a career-high on-base period percentage of .405. And don’t you dare forget about that .597 slug and 1.002 OPS.

Numbers like these aren’t easy to come by without some BIG games along the way. Like on May 21st, 2021, when Jesse Winker exploded with 3 home runs and 3 RBI in a four-hit performance against the Brewers. Then on June 6th, 2021, he’d also crush 3 homers and drive in another 6 runs. Anyways, there is no doubt that Jesse Winker’s stock is on the rise. And so are his rookie cards. Here are a few we love!

Time to pick up a Ronald Acuna Jr. “Bat Down” card? 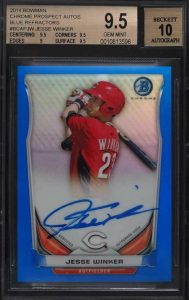 The card’s layout is simplistic, features Winkers powerful left-handed home run cut, and includes the Bowman logo displayed prominently on the upper right side of the card. What more could you ask for?

As far as values go, your best bet to get big money into your investment is an autographed refractor as some of these sell for over $1,000 at the moment. Of course, you can always play it safe and go for a non-auto refractor or base autograph for a fraction of that price. 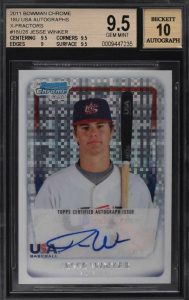 The 2011 Bowman Chrome has an interesting take. It’s almost as if Winker is about to be released into the world as a deranged baseball-smashing prototype that’s poised to make a major impact on the game someday. He is featured prominently in his home Team USA Jersey and staring smack dab at the camera doing his best deer in the headlights impression. Whether you’re a fan of the still photo or not, we love this Jesse Winker rookie card as it’s far more affordable than its 2014 counterpart. Even though it’s 3 years older. Go figure. Grab one! 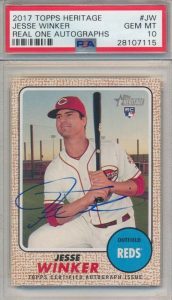 This card has nostalgia and good ole’ days written all over it. The photo features a calm Winker on one knee posing underneath a beautiful sunset that makes up the background. The outer layout of the card varies depending on the parallel and the card comes with an autograph. Look for the ones with red ink! Unlike the other two, this is a true rookie card rather than a prospect edition. Hence the triumphant smile across Winker’s face that seems to scream “I’ve finally made it.”

Question of the Day: Will Jesse Winker or Vlad Guerrero Jr. end up having the better 2021 season?

We know it’s not even to the All-Star Break yet but we’re not afraid of the small sample. Winker has shown flashes his whole career and he’s finally put it together. We’re not anticipating a second-half fade. In fact, an MVP may very well be in Winker’s near future. VERY near future. 8/10

We know what you’re thinking, what if Winker signs elsewhere after his contract is up or is traded? Will he be the same hitter he was in Cincinnati? That leads us to a stat we love the most about Winker’s 2021 breakout campaign. Home vs road splits. So far Winker has nearly identical numbers whether he’s away from Cinncantitai or at home. In fact, his road performance is slightly better believe it or not! 9 road home runs and a .335 average vs 8 home runs at home and a .330 average. Invest with confidence! 8/10

The only reason we’re not so thrilled with this idea is the late start to his career. Winker is going to have a LOT of work to do to put up Hall of Fame type numbers and that’s something we almost always look for in any long-term investment. 6/10