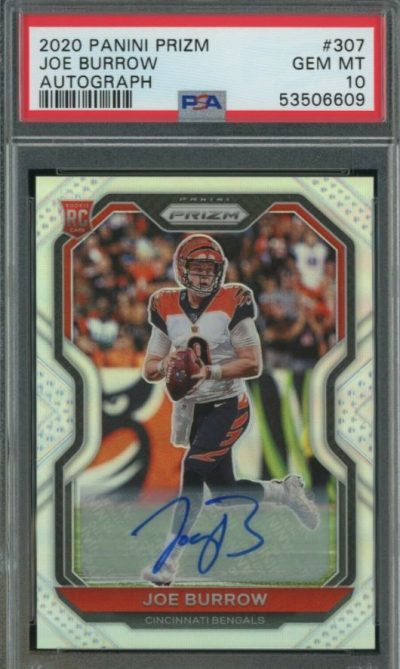 With an epic dark horse playoff run that almost led to a Super Bowl victory, there will certainly be no shortage of folks looking to add some of the best Joe Burrow rookie cards to their collections.  But how did the 3rd year QB manage to rise to stardom so quickly?

In case you forgot, Burrow’s rookie season was shortened by a devastating injury.  However, Joe quickly answered the call and any and all questions about whether he’d be able to bounce back. or not his college success would translate to the gridiron of the NFL. In just over half a season of play, Burrow threw for nearly 2,700 yards and 13 TDs against only 5 interceptions. Additionally, he was able to post a solid rating of 89.8, a completion percentage of 65.3, and an average yards per game of nearly 270. And even though all of that amounted only to a 2-7-1 record, you’ll be hard-pressed to find anyone putting the Bengal’s record on Burrow.

All of this makes it come as no surprise that Burrow and the Bengals became a force to be reckoned with once the star QB was healthy. And now that the team has that invaluable playoff experience under their belts the sky’s the limit. Before we review a handful of the best Joe Burrow rookie cards let’s go back to his season at LSU for even more evidence that they’ll be viable collector items for MANY years to come.

Random thought of the day:  Did anyone think Justin Hebert would be making this big of an impact this early??

The Season That Made a Joe Burrow Rookie Card Possible

Look, the guy was never a scrub. But, not too long ago, he was a MUCH different Joe Burrow. Although talented enough to get recruited by Ohio State, Burrow became weary of riding the pine and decided to split after failing to come away with the starter’s gig (much to the dismay to all those rabid OSU fans aka “bucknuts”). And his destination, as we all know by now, the BIG BAYOU.

In his Junior year, Burrow started to resemble the player that was taken number 1 overall in the 2020 NFL draft. In his first season under center at LSU, Burrow began turning heads with 16 touchdowns through the air and another 7 on the ground. He also put up 2,894 passing yards with a 133.2 passer rating. Numbers good enough to lead the Tigers to a 10-3 record and a Fiesta Bowl victory over UCF.  A good season indeed, but it wasn’t until the following year that he became THE Joe Burrow.

In 2019, Burrow started slingin’ touchdowns right off the bat with 5 against Georgia Southern. And he wouldn’t stop. Over the course of the next 14 games, Joe went on to throw 55 more touchdown passes on his way to an undefeated season. A season that ended with a spectacular 6 touchdown (1 on the ground) performance vs. Clemson and a hoisted Nation Championship Trophy. Oh, and he then went ahead and won the Heisman for good measure.

So it goes without saying, there’s going to be a built-in rookie card market for anyone capable of bursting onto the scene in this fashion.  Here are some for your consideration! 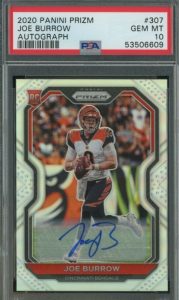 Might as well start off the list with that holds the most valuable collection of the best Joe Burrow rookie cards on the market. For instance, rare autographed parallels of the base card shown above are approaching $20,000 in value. And don’t forget about that Color Blast that can command more than $10,000. If you’re looking to go all-in on a 2021 Burrow bounce back, Panini Prizm is the set you should focus on. However, if you’ve got less than $1,000 to invest we recommend some of the more common Prizm variations without Joe’s autograph. 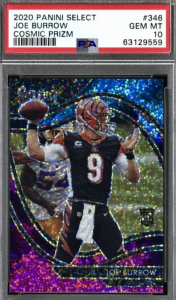 Take one look at that Cosmic Prizm card above and you’ll understand why Panini Select makes our Top 5 Joe Burrow Rookie Cards list. The set is loaded with amazing rare finds and mouthwatering inserts. In addition to those you’ll be treated to a wide array of base cards that make for great low risk plays. If you don’t find something you like in the Prizm collection you’re sure to like something here. A solid collection from a tried and true brand. 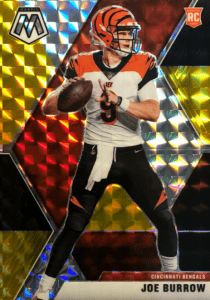 A relatively new set that is making some big-time WAVES is Mosaic. For example, some of the rare parallels from this collection have brought in well over $3,000. Talk about making an instant impact. Value aside, the cards are a treat to look at. Shiny and spectacular are two adjectives that come to mind. 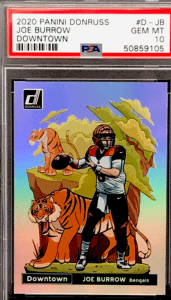 Without a doubt, the Donruss Optics Downtown insert is one of the Joe Burrow rookie cards out there. On top of the great looks, these carry good value with many sitting in that $1,000 range at the moment. You know how the song goes: “Things will be great when we’re DOWNTOWN!”

Not feeling the cartoon Bengal Tiger? There are plenty of great moderate-range investment options in the base set, just look for rare Prizms or an autograph. 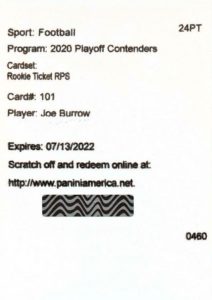 Another great set for high-end cards with many autographed valued at well over $2,000. If you happen to purchase a hobby box, be on the lookout for a “redemption card” as shown above. If it says Joe Burrow on it you’ve likely got some serious cash on your hands. It’s only a matter of whether or not you want to wait through the long Panini redemption process or sell the redemption card to someone with more patience. 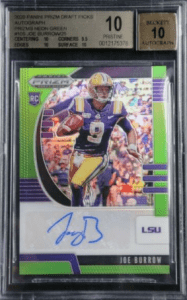 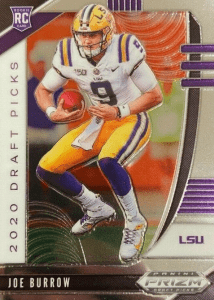 If you’re looking to go big, Panini is the brand you want. So far the most valuable seems to be the rare parallels of the Panini Select set but the 2 Panini Prizms shown above are nothing to laugh at either.  One shows Joe rolling out of the pocket (is that Justin Jefferson he’s looking for), while the other features a Burrow who appears ready for a big hit.

Other cards from Panini include their “Contender” and “Legacy” sets. Both have many different parallels and can bring in some serious cheddar. For instance, some of the rarest from the Contender set are selling for around $5,000. 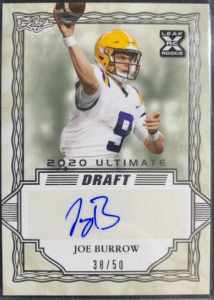 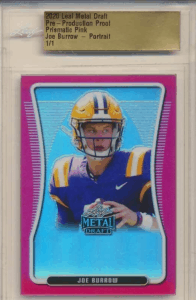 When it comes to Leaf, the best Joe Burrow cards come from the Metal Draft and Ultimate Draft boxes. There’s a variety of different options here so it may be a good idea to keep it simple and just look for one in good condition with an autograph. Autograph or not, you’re gonna be spending FAR less than you would when buying a Joe Burrow rookie card made by Panini. 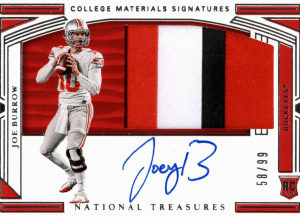 While they’re not common they do exist. For example, the one shown above from National Treasures features Joe standing tall in his Buckeye’s uniform looking for a receiver. As far as value goes there are many from this set available for less than $500. However, National Treasures isn’t the only set offering an OSU card. Keep your eyes open for ones from Flawless, Immaculate, and even Score!

Random Thought of the Day:

Would Joe Burrow come close to taking Justin Herbert’s ROY if not for the injury?

With expectations high, anything short of a playoff run may be viewed as a disappointment. However, Burrow should continue to put up numbers so the downside appears limited.

This remains our favorite of the 3 strategies. As we said even before the Super Bowl run, holding out for some REAL success seems far more lucrative than selling after a good season. While Joe didn’t pull off a ring, that’s ok because ALL of these possibilities are on the table if you have a medium-term investment approach: MVP, playoffs, Super Bowl, Super Bowl MVP. For someone with Burrow’s talent, those achievements aren’t just wishful thinking.

At this point there’s no reason to think Burrow and the Bengals won’t be playoff contenders for many years to come. Eventually he’ll get that Super Bowl and once he does WATCH OUT. Prices should escalate quickly. If you’re in a position to stash one away for the long haul don’t hesitate to do so.