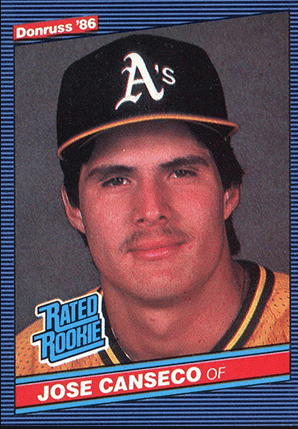 Interested in a Jose Canseco rookie card?  You’ve come to the right place!  We have 5 in mind that you can still be pick up for a fairly reasonable price (a couple of which seem INCREDIBLY reasonable).  So buckle up and let’s get started!

Jose Canseco’s Impact on the Game

As you know, we’ve already discussed what Mark McGwire rookie card options are out there.  But what about the other Bash Bro?  A look at one of the greatest baseball villains to ever step foot on the field is far overdue!  But first, let’s find out more about what Jose was able to accomplish before he was allegedly blackballed from the game.

Jose’s first cup of coffee came in 1985 where he hit a more than respectable .305 with 5 home runs in 96 at-bats (with that little amount of ABs it was more like a shot of espresso!).  However, just like the famous clash between Ron Burgundy and the rival news crew from channel 9, things escalated quickly.

In 1986 Jose gained instant recognition by hitting more than 30 home runs and driving in over 100 runs in his first full season (numbers that were good enough to earn him Rookie of the Year).  Over the next 5 seasons, Jose produced one of the greatest starts to a career that the game has known.  He totaled more than 30 home runs and 100 RBI in all but the injury-shortened 1990.

While the end of Jose’s career wasn’t as remarkable, he was still able to earn a spot on the 1999 AL All-Star Team and win a World Series with the Yankees the following year.  So now that you have a better grip on WHY you should be interested in picking up a Jose Canseco rookie card, let’s move to the question of WHICH. 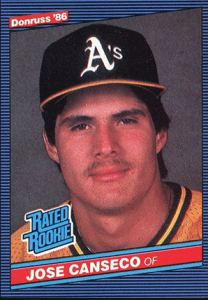 Alright, let’s start off with the most collectible (and valuable) of the group.  Looks are deceiving when it comes to 1986 Donruss Jose Canseco rookie card.  It features a ho-hum looking headshot of Canseco across one of the most boring Donruss backdrops.  However, with a current selling price of around $500 (for a grade 10), this card is NOT one to underestimate. 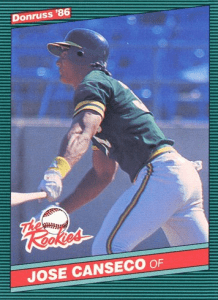 Coming from an off-shoot of the set we just discussed, the 1986 Donruss Rookies version shows Jose in action with what appears to the early stages of that famous Canesco home run trot.  However more exciting the card appears on the surface, it’s nowhere near as valuable as the one from the regular Donruss set.  So if you’re looking to get by on the cheap, this is your best bet. 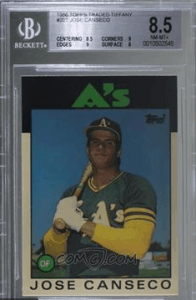 An iconic deck with a boatload of iconic cards.  Kinda makes you wonder why the 1986 Topps Traded Tiffany Jose Canseco rookie card isn’t as popular or as valuable as its Donruss counterpart.  The good news is, it won’t cost you as much.  So if you have a few hundred to throw around, consider picking up a 10 grade one of these. 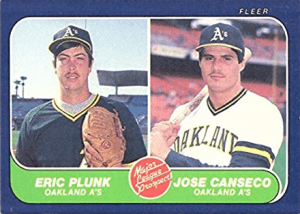 We end the list with a couple of cards from Fleer.  First is the card from the regular set which pairs Canseco with shady-looking fellow prospect Eric Plunk (we’re sure he’s a fine guy but the face Erik’s presenting is NOT a good look).  It’s not an easy card to find so if you can get past ole’ Plunk, you can own a card that should hold its value. 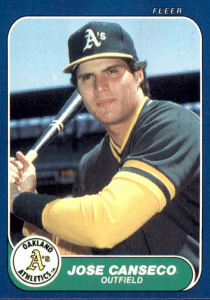 The second card from Fleer is from the “Update” set.  When it comes to the style and border of this card, it’s very similar to the regular version.  However, there’s one huge difference –  Plunk is gone in the Update version (probably much too the delight of the lady collectors out there).

Neither of the Fleer cards will break the bank, but the original version is the more valuable of the two.  We can only assume this has everything to do with how rare it is and nothing to do with Erik Plunk.

These cards aren’t even close in value to the rookie cards of fellow Bash Bro Mark McGwire or fellow 1986 rookie Barry Bonds.  However, that’s not always a bad thing.  For starters, it won’t cost you an arm and a leg to pick one up.  Secondly, a sudden pop in the Jose Canseco rookie card market can produce some amazing gains if you decide to purchase at current levels.

Canseco helped blow the lid off the steroids scandal, had a thing with Madonna, has 3 AL pennants, 2 World Series championships, and a rare 40/40 season. Villain or not, any player with a controversy/talent combo like this will always be relevant.   And the relevancy of the athlete is ALWAYS a good thing to consider when picking up a new card.