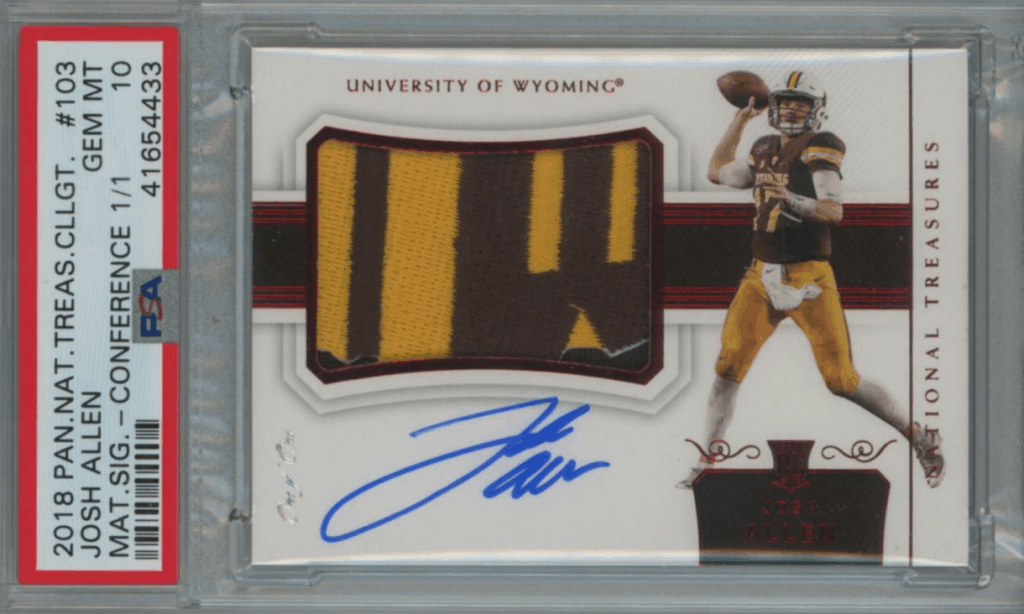 Have you suddenly found yourself in the market for a Josh Allen rookie card? Judging by what he’s been able to do so far, there’s certainly a lot worse ideas out there. And if Allen continues to make NFL football look this easy, his rookie card market will continue its manic pace. The question is can, or better yet WILL, it continue. We’ll certainly get into that before we’re done, but first, let’s take a minute to behold some of Allen’s top rookie card options.

Hot take of the day: Memo to Josh Allen – If we wanted to invest in a QB with a sweet mustache, we’d be on the hunt for a Gardner Minshew rookie card.  Thanks for losing the ‘stache Josh! 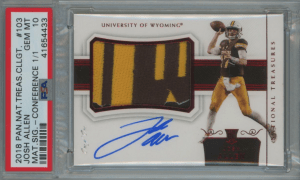 If you’re looking to make a sizable investment, this is the set to focus on. For instance, some of the less common autographed cards (in mint condition) have no trouble fetching well over $10,000. Even if you’re (only) looking to spend a couple of thousand, there are plenty of options to choose from. While this is a great set for high-end investors, there are still many choices for under $500 so don’t let the name scare you off if you’re not ready for a big investment!

Another set that is known for putting out some big dollar cards. If you’re looking to go big on a Josh Allen rookie card, the Cracked Ice parallel is the card to be honed in on. Personally, we LOVE the Optic Red and Optic Blues. They’re both great looking cards that aren’t all that hard to get your hands on. Plus they should ONLY cost you a couple thousand. Until Josh puts up another 4 TD and 400-yard game, that is. 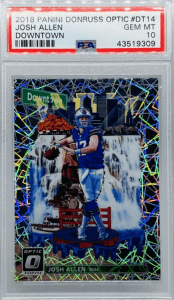 When it comes to how cool its cards are, this set blows the previous two out of the water (in our humble opinion). On top of that, the cards are much more affordable. And when it comes to cool, there may not be a cooler card on the planet than the Donruss Optic “Downtown” parallel. 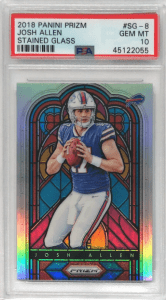 Without a doubt one of the most popular sets for a Josh Allen rookie card. Whether you want to spend big or only a few bucks, there are plenty of options. A set that’s also famous for making an incredibly popular Lamar Jackson rookie card. Just take a gander at the price on those and you’ll understand the potential of your Josh Allen investment! 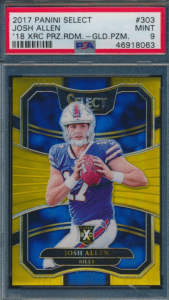 This one doesn’t quite make our BIG BOARD, but a great option nonetheless. When it comes to variations, there are so many different options it’s almost confusing. Which can be a good thing or a bad thing depending on how you look at it. As far as value goes, these aren’t quite on the level as Prizm but they’re close. If we’re gonna shell out thousands of dollars we’d rather have a Prizm but these will do in a pinch.

Every set we’ve listed has some great options if you’re looking for a Josh Allen autographed card. However, as you probably know, you should be prepared to spend more (quite a bit so in some cases) if you want one with the emerging star’s signature.

What is a Josh Allen Rookie Card Worth?

Obviously, it varies from card to card but they’ve been on a tear as of late. And rightfully so! As we eluded to earlier, the National Treasures and Contenders are the sets to look at if you’re looking for a big-money card. If you’re looking to spend quite a bit less, check out the 2018 Leaf set. Almost as cool as the Donruss Optics and a fraction of the price as some of the big boys!

With the way Allen is slinging the football, we can’t help but be attracted to this play. He just knocked off the Steelers and has the Bills in position to make a MAJOR run in the playoffs. In case it isn’t obvious by now, the breakout is real. The Bills have an excellent opportunity to return to the Super Bowl for the first time since those early 90s juggernaut teams. If Allen wins it all, and he certainly can, the words EASY MONEY will be an understatement. 9/10

As much as we like Allens odds this year, we like the future even more. Bills offensive coordinator Brian Daboll has set up a scheme tailor-made for his abilities. Additionally, Allen has found himself with a decent supporting cast that has shocked the NFL with their offense output. Sure a medium-term investment isn’t without its share of risk. There’s a lot that can happen over the course of the next few seasons. BUT, at the end of the day, we expect the success to continue for both Allen and the Bills. 9.5/10

Josh Allen hasn’t proven himself enough for us to be thinking about a long term play. YET. Tying up part of your bankroll for that long is always a hard ask. And if you do, it’s best to do so on someone with a proven track record (Mahomes comes to mind). However, that may change by the year’s end. Revisit this notion afterward. N/A