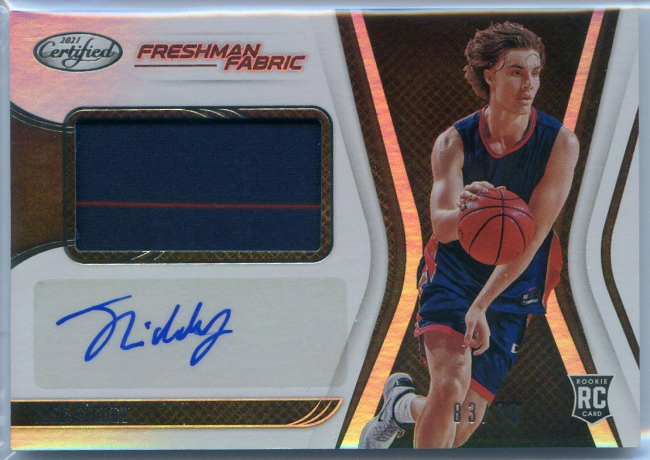 With the kid from the Land Down Under is holding his own in his first NBA season, a Josh Giddey rookie card investment is certainly worth mulling over. The 6’8″ guard out of Australia has shown early on that he is a double-double threat by putting up points, doling out assists, and bringing in the rebounds. Perhaps a reason why he’s being viewed as a dark horse to win the NBA Rookie of the Year award. But should this play come as a surprise?

To understand whether or not Giddey is playing over his head or merely living up to expectations, we need to take a look at his performance in the NBL. In his lone year in the Australian professional league, Giddey excelled in those exact same 3 statistical categories by averaging over 10 points, 7 rebounds, and 7 assists per game. With a track record to prove it and plenty of playing time, it wouldn’t be a reach to expect Giddey to not only meet but EXCEED expectations in 2021. As you know, expectations can come crashing down at any moment, but for the time being a small Josh Giddey rookie card investment seems well worth while. 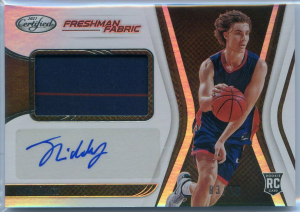 Above we see the Certified “Freshman Fabric” autographed parallel valued at more than $200. A great option if you’re looking to spend a decent amount on your investment. Other cards from the collection that hold a higher price tag are Panini Select, Panini Gold Standard, and Panini Contenders. Of course, look for an autograph if you want as much skin in the game as possible. Meanwhile, there are plenty of non-autographed cards that are available for just a few bucks. 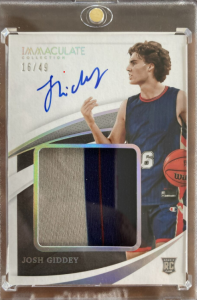 Time to look at a truly exclusive collection of rookie cards. Immaculate doesn’t have a huge amount of Josh Giddey rookie cards to consider but it makes up for it by offering some that are some of the most valuable released so far. For example, you can easily spend a couple hundred bucks on the /49 autograph above. In addition to the signature, the card features a patch and Giddey holding the ball across the right hand side. There are a few variations available so if you’re looking to spend a bit less or a bit more there are options out there. 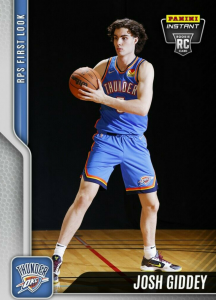 A first look at the best draft picks from last year’s draft, Panini Instant isn’t known for high values. However, there is plenty to like here as the cards feature Giddey in his Thunder uniform and many are available for well under $20. Not a bad idea if you’re looking to scoop up several cards and not pay big dollars to do so.

Last year a rookie emerged that had multi-category statistical capabilities. His name? LaMelo Ball. While comparing Giddey to Ball may be a bit premature, his number could become a lot more similar to Ball’s rookie year numbers with an uptick of points. When considering Giddey’s rookie cards are nowhere near the price Ball’s were at this time last year there’s a whole lot to like here. Watch closely for that scoring uptick because it it happens Giddey should rise even further to the top of the Rookie of the Year race.

There is plenty of potential for individual success, but can the Thunder return return to their winning ways sooner than later? So far it doesn’t look good for OKC setting the ship straight this year. However, a few more pieces could certainly propel the Thunder back into the playoffs sooner than most think. If so, look for Giddey to be the center piece at the middle of the massive rebuild. And if he’s a main factor in a playoff run over the next few year you can bet card prices will skyrocket.