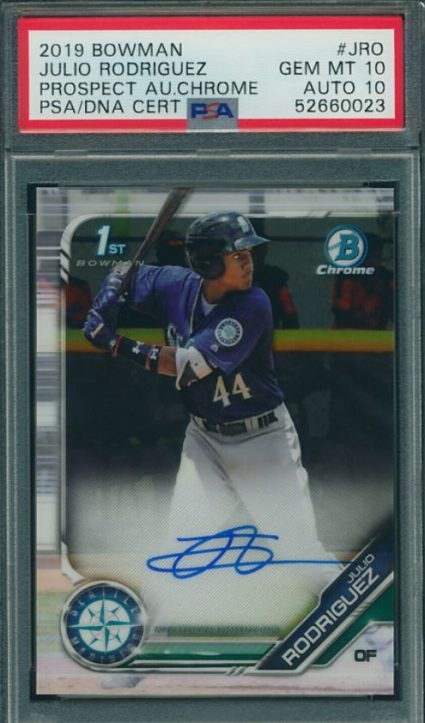 It’s not hard to see why lately collectors have been focusing on loading up on the best Julio Rodriguez rookie cards available. Certainly, the most successful first year player in the MLB has been none other than the Mariners’ dynamic outfielder.

Rodriguez, along with Jarred Kelenic, made up what the Mariners hoped to be a lethal tandem in the T-Mobile Park outfield for many years to come. While we’re not hating on Kelenic, it’s safe to say one has adjusted to the big leagues far better than the other. So while a Jarred Kelenic rookie card purchase might be a decent buy low play, a Julio Rodriguez rookie card has seen nothing but green lights.

While some unheralded rookies have a limited array of options, Rodriguez has plenty of early rookie/prospect card options to choose from. It’s just a matter of how much you want to invest. That’s why we’re about to review the best Julio Rodriguez rookie card options. Regardless of what you end up spending, an investment right now may be worthwhile if you play your cards right. Pun intended. Anyways, let’s get into it!

Here are a few of the top Bobby Whit Jr. rookie cards! 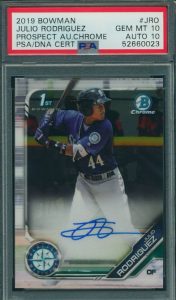 We’ll start with the most valuable. No surprises here, Bowman Chrome leads the way. If you want a rare refractor with an autograph and a high grade from PSA or Beckett you’re looking at $2,000 or more. Meanwhile, if you’re not looking to spend that much consider an autographed base card or a refractor without an auto. Overall the set contains the most valuable Julio Rodriguez card options on the market. 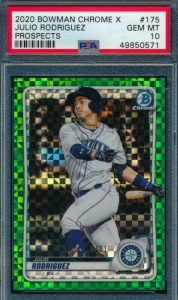 While not as valuable or as popular as the 2019 Bowman Chrome, the 2020 Chrome X has some Julio Rodriguez rookie cards that command a decent amount of dough. However, with no autographs available, you should be able to find plenty of cards for less than $500. 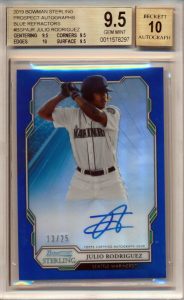 There are all kinds of options in this set for less than $300. Especially if you don’t mind buying a card that hasn’t been graded. In addition to the style of card shown above, there’s also a die-cut refractor with a horizontal layout holding a similar value. 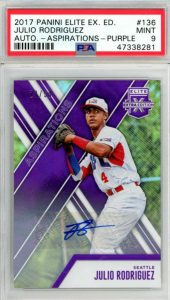 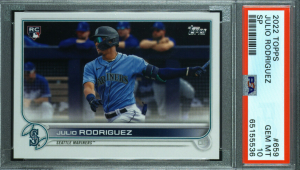 Now we move into the category of TRUE rookie cards. As in the ones with the RC logo on the front. Unlike the prospect cards we’ve covered so far, these celebrate Julio’s actual rookie season. A season that has crowned him AL Rookie of the Year by the way.

At any rate, the 2022 Topps collection makes for a great play for anyone who wants a classic Julio Rodriguez rookie card without paying an arm and a leg. 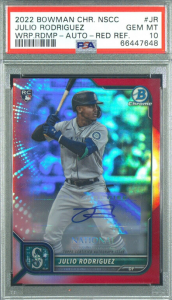 We go from a true budget play to a set that offers some of the best and most valuable Julio Rodriguez rookie cards in existence. For example, it’ll take not hundred but THOUSANDS to add the Red Refractor shown above to your collection. While 2022 Bowman Chrome is loaded with plenty of high dollar investment options, you can also pick up one of the more common refractors or base cards if you want in on the cheap.

As we mentioned earlier, there is no shortage of cards to choose from. On a budget? There are plenty of great cards to choose from for under $10. Just don’t go hoping for an autograph or a refractor! Big spender? Huge values aren’t hard to find. Just taking a look at the BEST Julio Rodriguez rookie card that broke records recently. That just goes to show there’s something for EVERYBODY.

In addition to monetary value, the cards clearly hold some sentimental value appeal as well. And not just for Seattle fans. Once you’ve seen this kid play you’ll be hard pressed to part with your card. Why? It appears that thing are only going to get better.

What is the most valuable Julio Rodriguez rookie card?

The highest values will be cards that have a print run of just 1 and reside within a collection from Topps and Bowman. Some of these cards have no problem exceeding the $20,000 mark. As far as sets go the one with the most high value cards is without a doubt 2019 Bowman Chrome.

Is a Julio Rodriguez PSA 10 worth it?

YES! In the world of sports card collecting there isn’t a more coveted grade than a PSA 10 or Bowman 10. If you’re looking for the biggest gains shelling out the extra cash for a perfect grade is well worth the price if Julio goes on to be a star.

Is a Julio Rodriguez card signed worth more?

Absolutely. When compare to the similar cards from the same set that do not include an autograph you’ll find the ones that have been signed far outweigh the non-autos in terms of value.

How much should I spend on my card?

As with anything else the answer to this question is highly situational. However, you’ll want to ask yourself two important questions. The first of which is how much you can afford to spend. We always recommend collecting with a cool head so if anything lean to the side of caution when coming up with a dollar amount. Secondly, high is Julio’s ceiling ? If you believe he hasn’t even begun to tap into his potential then you know EXACTLY what to do. UNLOAD. If you think he’s near his peak then consider some alternative options you’re more confident in. One thing is for certain, the more you spend the more you stand to gain. Or to lose for that matter.