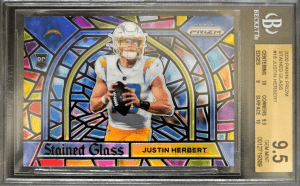 At this point picking up one of the best Justin Herbert rookie cards seems like a NO-BRAINER. In case you’ve missed it, Herbert has picked up right where he left off in 2021 and appears ready to take the next step forward. As in the Super Bowl Champion next step kind of way. Something that was made loud and clear by that 4th quarter comeback to beat Mahomes and the Chiefs. But can he recapture the amazing season that made Herbert the best rookie QB EVER?

In case you missed it, Herbert set records for passing TDs, completions, and total touchdowns in 2020. On top of all that, he was only 39 yards short of the rookie passing yards record and narrowly lost to two of the best QBs of all time in Brady and Breez.

Believe it or not, Herbert can do MUCH better. He’s already shown he can beat the best the league has to offer. Soon people should start waking up to the fact that Herbert is firmly entrenched in the perennial contender category. Something that makes these red hot Justin Herbert rookie cards even more tempting! 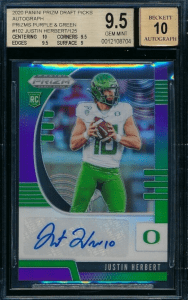 Card #102 is the featured item in this set. There are many variations, each with a different degree of rarity. Among the least common are the Neon Orange and Gold Vinyl, with only 2 being made for the orange and 10 for the gold. One of the more common among the high-end cards is the Camo with 25. 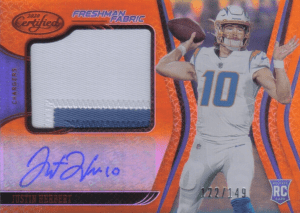 Plenty of good options in this set. There’s a variety of Freshman Fabric parallels along with a few from the Rooie Roll Call variation (we personally like the Rookie Roll Call but both are legit). Even the hardest-to-find cards are affordable SO FAR. For instance, the lone 2020 Mirror Black sold for just over $600 just before the season began. 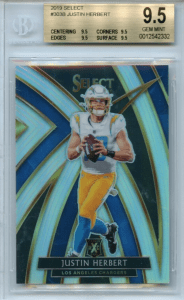 This seems to be the set that is setting the high-end Justin Herbert rookie card market. So far, there are plenty of options to choose from if you’re looking to invest more than $1,000. Early stand out parallels are the Auto Prizm and Tye Dye Auto. If you want to see the potential of this set, check out how it’s performed in the Kyler Murray rookie card market. Yep, there’s plenty of room to grow! 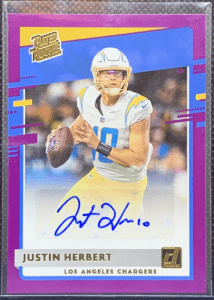 When it comes to rookie cards, you really can’t go wrong with this set. The name kind of makes that obvious. Having a hard time deciding? Consider picking up one of the Optic variations. Chances are you’ll be glad you did once he’s announced as the starter. 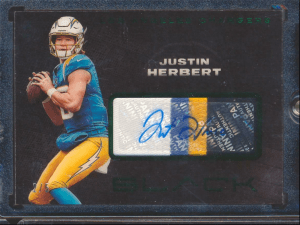 This new set that launched last year as an online exclusive product seems to be gaining popularity. Can’t really blame people who are hopping on this bandwagon. They are some amazing-looking cards. Sleek and crisp with a dark finish. Kinda like what you expect out of a luxury automobile, only in a card. Digression aside, there’s plenty of amazing Justin Herbert rookie card options in this set. Pick one you can afford and place it front and center in the display case! 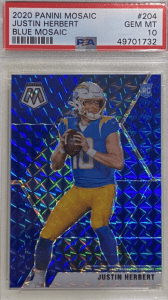 Other than the Panini Select set, the Mosaic appears to be the best choice for those looking to make a sizable investment. There are plenty of autograph options and a unique NFL Debut card that comes in a variety of parallels. When it comes to value, you’ll see many options selling for more than $1,000. And by the end of the season, there’s a great chance the number will be much higher than that. Easily one of the best Justin Herbert rookie cards out there. 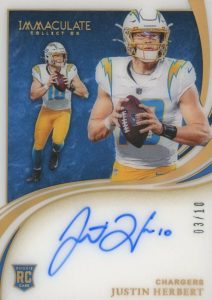 Another great collection if you’re looking to go BIG on your Justin Herbert rookie card investment. Let’s put it this way, there is no shortage of rare autographed and or material-laden cards here worth well over $1,000. While Immaculate is known for the big price tags, there are some cheaper options available but not nearly as many as some of the other collections we’ve covered. 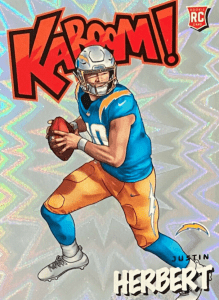 Last but not least, we can’t let our Top 10 Justin Herbert rookie cards review go without bringing up one of our favorite cards: Panini Absolute KABOOM!! These things are quickly becoming a fan favorite and it’s easy to see why. Similar to the Donruss Optic “Downtown” Inserts, these offer an “in your face” animated design that features Herbert breaking downfield or rolling out of the pocket. Either way, you have a card that you’ll have NO PROBLEM flipping when it comes time to sell. Values vary but some of the less common parallels can pull in $5,000 with ease.

Another amazing insert, this one from the 2020 Panini Prizm set. Just like the KABOOM! shown above, this card comes with a monster price tag. Some of the higher-graded examples can fetch nearly $10,000 in eBay. We wouldn’t de surprise one bit if that number continues to grow higher! 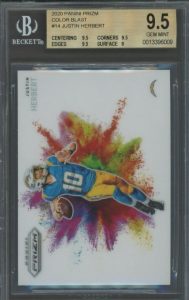 Just like the other two in our Top 3, it’s going to take a serious investment to make one of these yours. While the price tags may seem high, these will be some of the most valuable football cards out there if Herbert lives up to the expectations he set his rookie season over the next few years. Another similarity between the Color Blast and the other two cards on our Top 3 is the “cool factor”. It’s hard to beat the stylistic approach to this card.

Joe Burrow and Justin Herbert have already made the 2019 rookie QB class look like one of the best ever.

Don’t look now, but Tua continuing is continuing that trend. Might be a good time to take a look at these Tua Tagovailo rookie cards!

We all saw what he was able to accomplish right out of the gate in his rookie season. And for his encore performances, a Super Bowl victory is the on the horizon. The Chargers improved defense and high-flying offense have convinced lots of people of that. A deep playoff run ending with a Super Bowl appearance could make these red hot Justin Herbert rookie cards even hotter. 9/10

Seeing how beautifully he handled his first couple of seasons, the next 5 years look incredibly bright for the Justin Herbert rookie card market. With Herbert at the helm, the Chargers are poised to make not one but MULTIPLE Super Bowl runs. And let’s not forget about the league’s MVP award. Nothing appears off the table at this point. 10/10

You’ll probably want to sell when you get a golden opportunity in the short or medium term. However, the more Herbert builds his resume, the more reasonable a long-term investment strategy becomes. If Herbert finishes the season as strong as he started, a long-term approach becomes more and more viable. However, at the end of the day, we prefer the first two options. 7/10

Justin Herbert has wrapped up the best rookie season for a QB in NFL history! Here are some cards from the players he surpassed on his way.