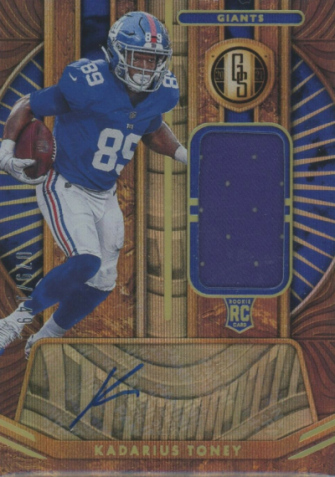 Twas a slow start for Kadarius Toney, but suddenly things are looking up. If and his on-the-field performance is going that direction, it’s only a matter of time before the Kadarius Toney rookie card market follows suit. So all of you who were scared about the fact that he’s a Giant may need to consider your position on this talented young wideout. Worried that the slow start is more pf a representation of what Toney is than that 185-yard breakout game at Dallas? Don’t be. Toney was also a slow starter in college!

If it wasn’t for a senior year that had scouts drooling, the thought of a Kadarius Toney rookie card might be nothing more than an afterthought. Yes, you could definitely call the kid a late-bloomer. In spite of the fact that he played four years in college, Toney’s potential wouldn’t truly be realized until his senior year as a wide receiver for the Florida Gators. That year, Toney had 70 receptions for 984 yards and 10 receiving touchdowns. Additionally, he ran 19 times for 161 yards and a rushing touchdown. One statistic that definitely stands out is the fact that Toney got a lot of yards out of every catch as Toney averaged a whopping 13.3 yards per catch for his college career. Something that played a part in his 984 yard total being the third-highest among receivers in the SEC.

Now that Toney is in the NFL, the same scouts that played a role of making him a first-round draft pick are looking to be validated. A couple of more games like that one in Dallas and they soon will be. Here are a few Kadarius Toney rookie card options that you’ll want to own if he meets those expectations. 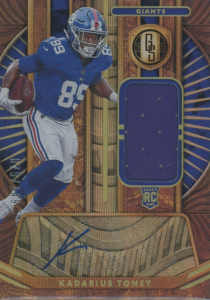 Let’s start with Kadarius in that fresh Giants jersey. These are just about the most expensive Kadarius Toney rookie cards you’ll find right now with numerous options worth more than $250. And if you really wanna get nuts see if you can track down that lucky guy who owns the 1/1 NFL Shield autograph card. You’ll likely need close to $1,000 if you want to convince him to sell. 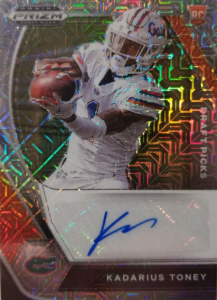 Nothing but great options here. The Prizm varieties come with Toney’s autograph and are going for much less than some of the other high octane first round draft picks from 2021. We love the Red Pulsar and Mojo Refractors. Autograph and a serial number of 25 or less and still only $100? All day. 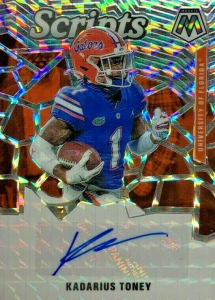 Right now the options available with Toney’s autograph are hogging the spotlight. Look for the Scripts insert or a card from the Rookie Autographs line if you have a hankering for some ink. However, autographed cards aren’t the only thing Mosaic has to offer. There are plenty of rare Prizm options at incredibly affordable prices. A go to set for that perfect mixture of quality and affordability. 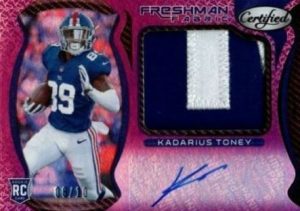 Simply put, one of the best collections for a Kadarius Toney rookie card you’ll come across so far. Whether it’s an autograph, material card, or both, Certified has all the boxes checked. The card above is a Freshmen Fabrics autograph with a print run of just 10. While this is one of the more expensive options in the set, there are plenty of inserts and base card options that are more suitable for the casual collector.

Let’s face it, even the rarest autographed Kadarius Toney rookie card options aren’t going to do much damage to your bankroll. At the moment, anyways. He has the potential to be one of the biggest impact players of the 2021 rookie class was starting to turn the corner before the recent ankle injury. It doesn’t appear to serious so consider picking one up if there is any lull in the market. 7/10

Even with the breakout game against the Cowboy, Toney remains a high-risk high-reward player. If you plan on buying be prepared to hold for more than a year if need be. The talent is there. Let’s see how long before he puts it together on a conisistent basis. 7/10