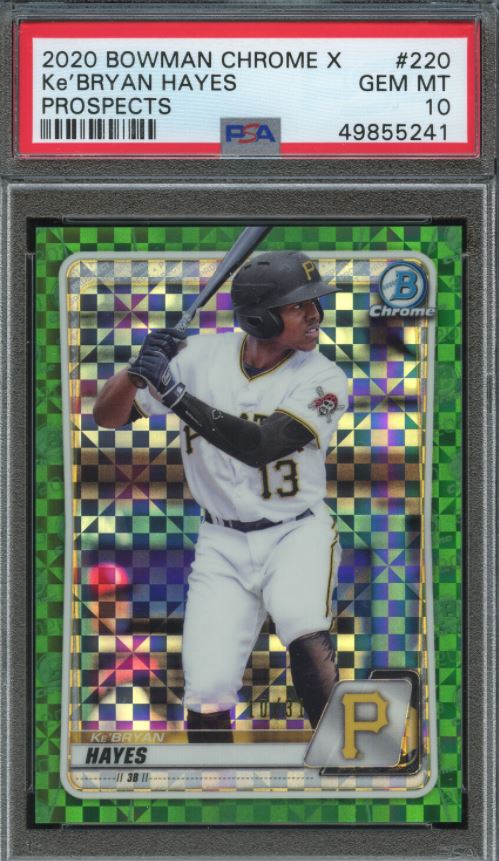 With the Pirates’ young 3rd baseman suddenly landing in the top 10 of MLB prospect rankings, there will be no shortage of collector’s on the hunt for a Ke’Bryan Hayes rookie card this season. But what caused this meteoric rise?

Before the 2020 season, Hayes barely cracked the top 100, with scouts questioning his ceiling as a hitter once he arrived in the big leagues. And that makes sense given the fact that he only averaged 5 home runs per season with a career .275 BA while down on the farm.

Then came his 2020 big league debut where Hayes came out of nowhere to hit .376 with 5 home runs in just 85 at-bats. Now suddenly Hayes is ranked number 9 on MLB’s Top 100 Prospect list and is being pegged for a Rookie of the Year favorite. Talk about a come-up. At any rate, here are a few of his rookie card options if you’re looking to join the party. Warning: the party may be short-lived!

Is 2021 the year Vlad Guererro Jr. finally lives up to his minor league billing?? 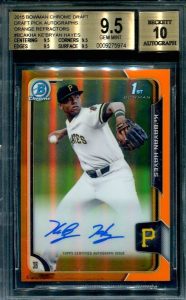 You might mistake Hayes for a pitching prospect after taking a glance at his first-ever Bowman card. However, it’s just a photo of Hayes showing off his strong arm at the hot corner. A tool that’s been rated a 60 grade by the scouts. At any rate, this is by far the most valuable Ke-Bryan Hayes rookie card option with some of the less common auto refractors selling for well over $1,000. That’s not to say there aren’t many more affordable investment options in this set. Either way, can’t go wrong here (if Hayes pans out that is). 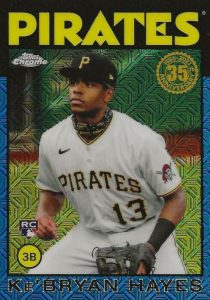 A true rookie card from the 2021 Topps Series 1 set complete with the RC label in the lower-left corner. The card features the iconic 1986 Topps style and comes in a variety of parallels and is available with or without an autograph. As far as value goes, this is a moderate investment option with many cards in the $100-$400 range. In addition to the card shown above, there’s also 70 Years of Baseball option that holds a similar value. 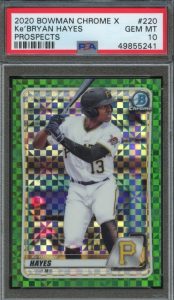 No autograph? No problem! The 2020 Chrome X Ke’Bryan Hayes rookie card is a great option for collectors who want a Bowman without having to pay the steep prices associated with the 2015 Chrome set we discussed earlier. 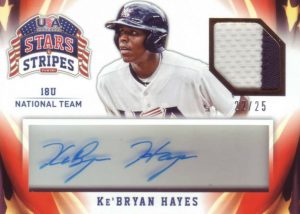 By far the most affordable option on this list with even the rare 25 print run card shown above valued at less than $50. The card harkens back to Hayes’ time playing high school ball when he had plans to play for the Volunteers. At the end of the day, it looks like the decision to enter the draft worked out as he’s now the number 9 prospect in the land!

We might be crazy, but 85 MLB at-bats seem like an incredibly small sample size. While the scouts may end up being right, we’re not willing to risk much of an investment on it given Hayes’ minor league resume. That said, there may be some potential for some decent short-term profits if you sell right before the season starts. Holding any longer than that seems incredibly risky to us. 4/10

If we didn’t like the short-term play, we certainly don’t like holding for more than 1 year. If Ke’Bryan shocks us and turns in a Rookie of the Year performance, we’ll be the first to admit we were wrong. And congratulate all those who saw it coming! However, we just don’t see it happening. 2/10