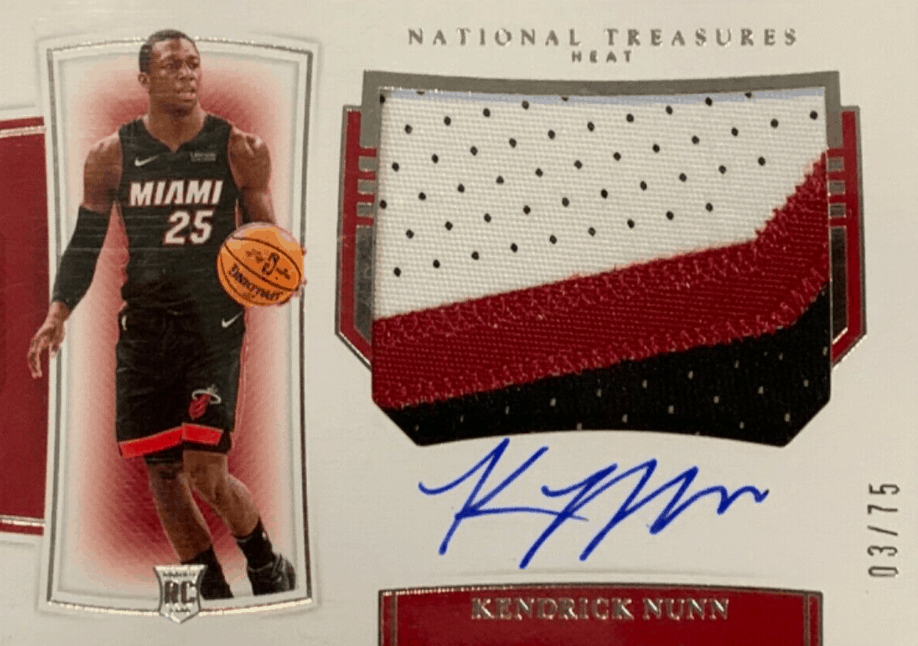 We just told you about some great Ja Morant rookie cards, so it seems like an appropriate time to cover some great Kendrick Nunn rookie card options.  While we have some great cards in mind, first we should take at the out of nowhere  2020 season that made everyone so eager to buy them!

As you likely know, Nunn’s path to the NBA was not a traditional one. After going undrafted in the 2018 NBA Draft, Nunn bounced around in a summer league sponsored by the Golden State Warriors but was never signed. However, Nunn’s fortunes shifted when the Miami Heat offered him a contract in April of 2019. Nunn signed it and didn’t look back.

In his first year in the NBA, Kendrick Nunn won multiple Player of the Month Awards and average a crips 15.3 points per game. On top of that, he chipped in 3.3 assists, .8 steals, and 2 three-pointers. What did all of that add up to? Only a second-place finish for Rookie of the Year. And if Nunn continues to build on his impressive rookie seasons, you can expect some great returns on the following cards! 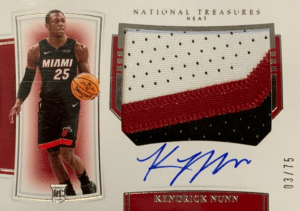 The card shown above is the horizontal version which can still be picked up for less than $1,000 if it’s not graded. In addition to the horizontal, there’s a vertical style that seems to cost a bit more. For instance, card 25/99 (the one that matches his jersey number) recently sold for nearly $4,000 on eBay. 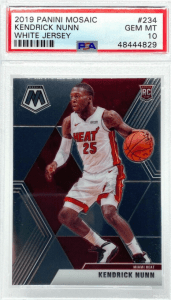 Lot’s of great low to mid-range Kendrick Nunn rookie card options in this set. Many NBA Debut, Rookie Scripts, and base card parallels fall between the $1000 and $1,000 price range. Pick one you like and make it happen! 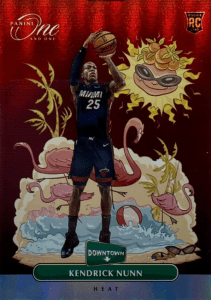 While pretty much every “Downtown” card is straight-up SICK, this is one of the best we’ve seen so far. The card shows Nunn popping a casual jumper in front of a sweltering hot Miami Beach backdrop. In fact, the only thing that could make it better is a cameo by Rick Ross. Enough wishful thinking. Bottom line: As far as looks go, it’s hard to make a card any better than this! When it comes to price, expect to pay somewhere in the $500 range for an ungraded. 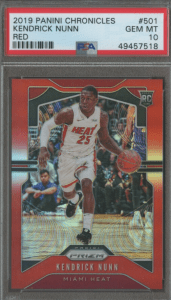 A card that’s well investing in if you’re looking for a Prizm without breaking the bank. For instance, you can still get a grade 10 for somewhere around $300. If Nunn follows up with a strong 2nd season, that won’t be the case at this time next year.

Kendrick Nunn No Name Card (Buy it on eBay!) 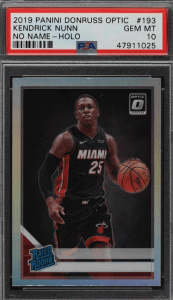 We can’t have a Kendrick Nunn rookie card post without mentioning his Donruss Optic “No Name” card. The card follows the style of the famous Frank Thomas No Name error card that ended up becoming one of the most valuable baseball cards of the 90s. Here’s to this one becoming one of the most valuable basketball cards of the 20s! There’s plenty to choose from as the “No Name” is seen across all of the parallels. Some can be taken on the cheap while the less common parallels will set you back a few hundred.

Speaking of rookies, who will emerge to be the most valuable rookie from the 2020-21 Panini Prizm Basketball set?

Sure it didn’t come with the built-in hype as did a Ja Morant or Zion Williams, but the Kendrick Nunn rookie card market is starting to pick up steam. If Nunn continues to impress his second year we could see an even bigger uptick as all the doubters finally start rushing in. However, an unheralded player has a much short leash than the hyped-up top prospects. Beware. A second year slump could be devastating. 7/10

We’re uncomfortable with thinking past a year simply because the 2020 rookie year performance was so unexpected. Is he a one-hit-wonder or a future All-Star? These stats seem to suggest the latter. However, we remain wary. 4/10.

If we’re not sold on a mid-length strategy we’re certainly not going long. That’s not to say it couldn’t work out. Just plenty of better ways to use your money in the meantime. See what happens in 2021 and revisit all of these options. 1/10.