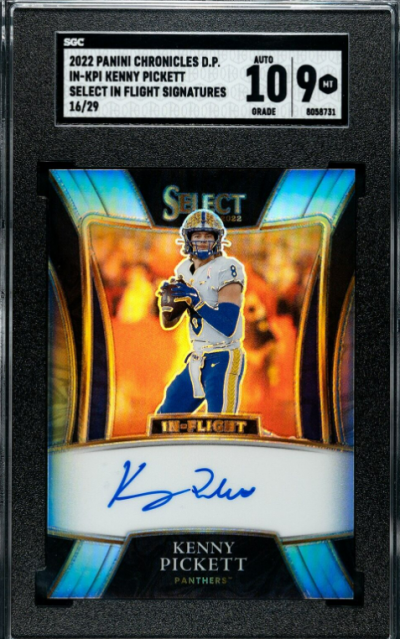 The Pittsburgh Steelers may have surprised some folks by passing on dual threat Malik Willis and grabbing Kenny Pickett as the first QB off the board in the NFL Draft. On account of that bold move, collectors across the country are now on the hunt for the best Kenny Pickett rookie cards.

While the decision to go for Pickett over Willis may have surprised some, many analysists believed the 20th overall pick to be the most pro-ready QB going into the 2022 draft. Which is obviously something the Steelers desired. In fact, Pickett made a statement in his first game by being the only quarter back ever to rush for 2 touchdowns on his NFL debut.

With all of that in mind, it comes as no surprise that the hottest Kenny Pickett rookie cards are being bought by hobbyists who want in on the hype. At least until the games started begin to build up where hype will eventually give way to results. So if you’re a collector who likes the idea of buying the sizzle and riding it like a tidal wave as we lead into the season, here are some great early options to consider! 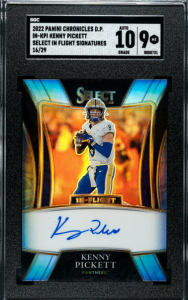 Without a doubt the best Kenney Pickett rookie card offering we’ve seen so far. Regardless of which Panini brand is your favorite, chances are you’ll find it in the Chronicles collection. The set is pretty much a mish-mash of Panini’s top sets and has quickly become a fan favorite. And for good cause.

Look at it this way, all you can eat buffets are popular for a reason. That’s exactly what you’re getting when you buy a pack of Chronicles. Complete and utter variety. And who doesn’t like that. While the best collections are yet to arrive, this one is the go-to set if you’re looking to add a high-value card early in the season. 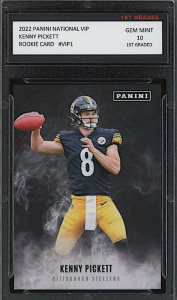 Another great option is Panini National. With amazing cards like the Cracked Ice Prizm and the Splash of Color insert, there is no shortage of tantalizing options. As a result, you may have a hard time figure out what card to buy. While this may present a problem, it’s a good one to have if you’re in the mood to scoop up more than one card. 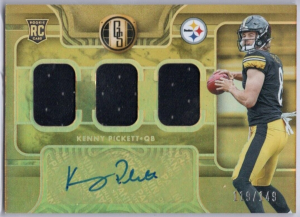 Always one of the biggest early releases of the season, Gold Standard comes to the table with an amazing set of Kenny Pickett rookie card options. Just tale a look at he the autographed card shown here. In addition to the ink it boasts a print run of just 149 making it a rare card that’s sure to increase in value if Pickett can make an impact in 2022. 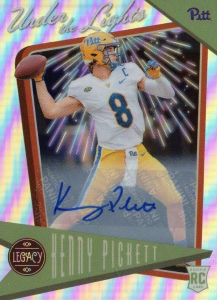 In addition to Chronicles, there’s another great early season release called the Panini Legacy collection. As you can see in the card above, the set stands out with sheer eye-popping style. Not only does it bring the flare, Legacy also has plenty of cards that feature ink on the front. As a result, this has become a sought after set for collector’s who want one of the hottest Kenny Pickett rookie cards with an autograph. 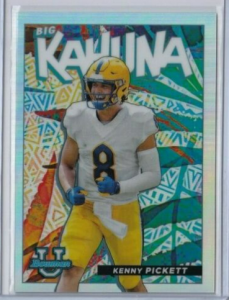 Bowman University is the football answer to the brand’s ever popular Bowman Chrome collection. The set offers an incredible array of refractors and base cards that are available with or without Pickett’s signature. In addition to those, you’ll also notice the newly popular BIG Kahuna insert. Right now it’s one of the hottest football rookie cards of 2022 in the set and also comes available as a refractor and/or autographed.

As far overall style goes, baseball card fans should love what Bowman is doing here. Take one look at the base cards from the set and you’ll see why we compared it to Bowman Chrome baseball earlier. On top of that, the Kahuna insert rivals the in-your-face style of that of other popular inserts such as Panini KABOOM and Donruss Downtown. Despite this not being a baseball collection, Bowman seems to have all bases covered here. 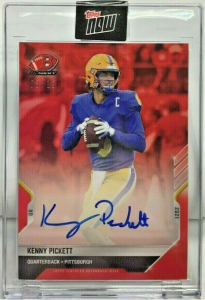 We love how Bowman is putting it’s best foot forward to grab the lion’s share of the early NFL rookie class trading card market. In fact, they have the Kenny Pickett rookie cards on lock in the early going. With other first to market sets like Leaf Metal and Pro Set being noticeably absent, Bowman is far and way the top option. That said, the baseball card behemoth’s Bowman Next collection is red hot right now. And it shows when it comes to card values. For example, the /10 Red Refractor shown above has recently sold for nearly $1,000. Expect those prices to continue to rise. At least until the pre-season comes calling. 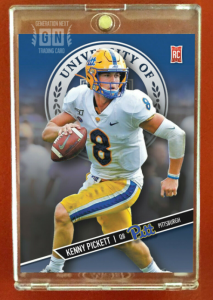 We round out the list with a modest Kenny Pickett rookie card offering from Generation Next. While this little known brand certainly doesn’t pack the prestige like the big boys, it makes up for it with a good looking card that casual collectors can buy on the cheap.

Just take on look at the card above. It should be easy to see why we’re a fan of it’s simplistic style. Kenny Pickett is shown front and center with a blurred background that really makes his photo pop. Additionally, the color combo couldn’t be more perfect. The shades of dark blue with a hint of brown is reminiscence of a primetime game on the college gridiron.

Then there’s the pricing. When we say casual collectors can afford to dip their toes in we mean it. The base card from the set should be available for a couple of bucks while many of the rare parallels should go for less than $20. Dig in!

Question of the Day: Will Kenny Pickett have a better rookie showing that former first round pick Trey Lance?

As we’ve eluded to, these are just some of the earliest editions you’ll find. Soon more of the big name Panini collegiate options such as Prizm and Contenders Draft will begin to arrive so sit tight. Once they do, we’ll be sure to update the list with more cards to scoop while they’re still hot. Hopefully for both collector’s and Kenny Pickett they’ll remain that way for years to come!