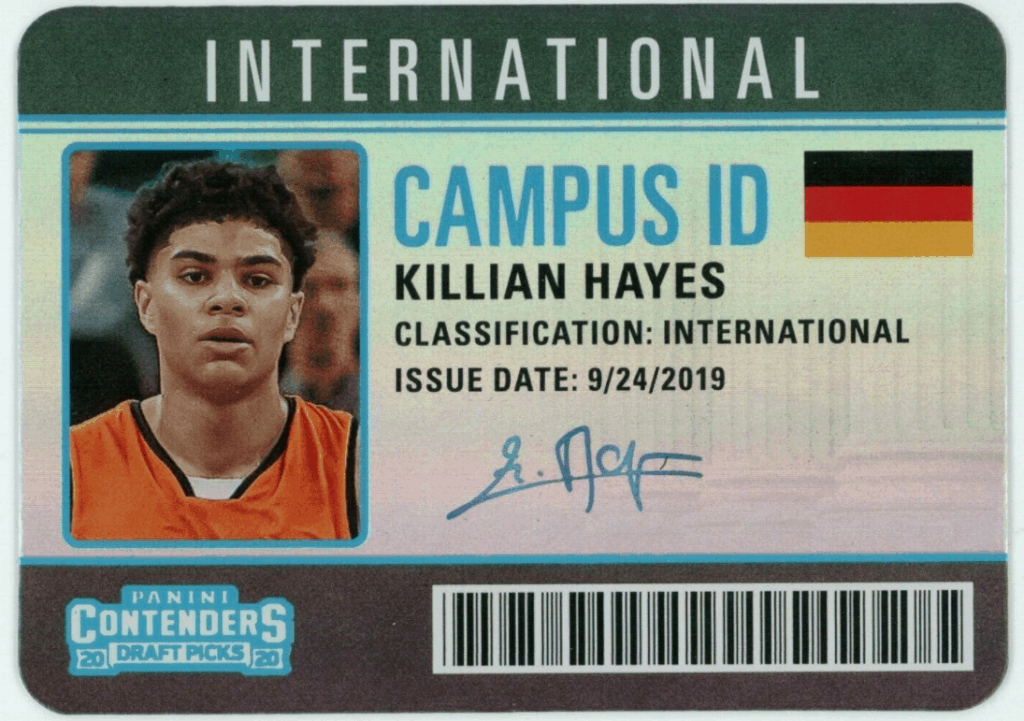 When it comes down to which rookie will shine brightest in 2021, Killian Hayes WAS on the shortlist of potential candidates. But then came a nasty hip injury that’s prevented Hayes from playing in all but 7 games so far this season. Ouch. However, he’s progressing well and should be back on the court fairly soon. Therefore, an investment in a Killian Hayes rookie card may not be a bad idea in anticipation of his return to action.

While he didn’t turn many heads in the few games he played before the injury, we can expect steady improvement as he progresses through the rest of his rookie season. Especially in the area of the cold-shooting, he displayed prior to the injury. Meanwhile, the ability to make plays was an area Hayes excelled at in his first 7 games with 3.6 assists per game in only 21 minutes of average playing time. Look for this to get better as well. The question will he be the same player after his return or will he need some time to get back in the swing of things?

How that answer turns out will make a huge impact on your Killian Hayes rookie card investment. Here are a few options if you decide to take a chance on this talented but unproven player. The good news is, compared to other top rookies, you’ll pay far less for one of Killian Hayes’ RCs. Time to dig in!

Does Killian Hayes have what it takes to follow in Ja Morant as the 2021 Rookie of the Year? 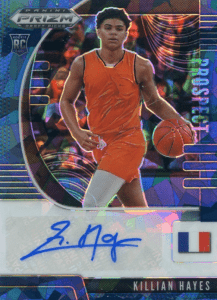 The card above is the Blue Cracked Ice Autographed Prizm that has a print run of 75. While it’s a fairly scare card, it’ll only cost you well under $300 for a non-graded version. Compare that to someone like LaMelo Ball (who only went a few picks ahead of Hayes in the draft) and you’ll see a NOTICEABLE difference in value. 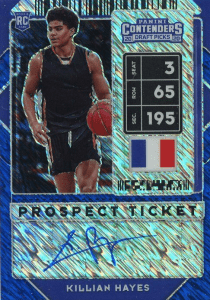 The Contenders Draft set is always one of the most high priced “draft pick” sets. Even so, you can still pick up a rare “Prospect Ticket” or “Draft Ticket” parallel for well under $1,000. If you expect big things from Hayes, picking up one of these on the cheap seems to make plenty of sense. 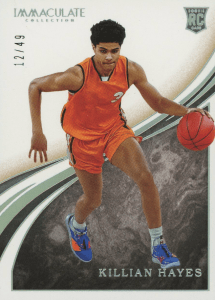 If you’re looking to get in on the Killian Hayes rookie card market at ROCK BOTTOM PRICES, this is the set for you. Even the ultra-rare cards are still selling for less than $100 and in many cases for less than $50. Just imagine how quickly (and how far) those values will skyrocket if he ends up being the league’s best rookie. Or even just one of the best. Opportunity galore. 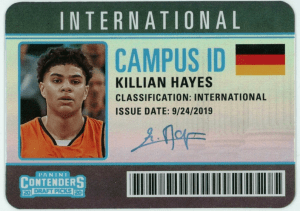 A specific card from the Panini Contenders set that mimics a college ID. While Hayes didn’t attend college, Panini still thought it necessary to include him in this unique run of inserts by using “International” where the school name would normally be. 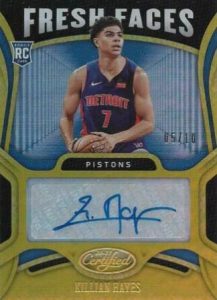 The Fresh Faces insert shown above is one of the top cards we’ve seen so far from the set as it has a print run of 10 and comes with Killian’s autograph. If you’re not looking to spend big focus on a no-autographed version of the base cards as many of these are selling for less than $20 at the moment. If Hayes returns to health and picks up his game that will change QUICKLY.

Questions of the day: Who will go on to have a more impactful rookie season James Wiseman or Obi Toppin?

We like this as a true value play. Compared to other top picks and Rookie of the Year candidates, Killian Hayes’ cards are a complete steal. The potential massive payoff seems to far outweigh the relatively low amount of risk here. 8/10

It’s hard to gauge what to expect from Killian Hayes. As with many first-round draft picks, some seem to think there’s a chance he becomes a star. On the flip side, others think the Killian pick has bust written all over it. Perhaps the answer lies somewhere in between. Either way, we’re not thinking anything past this season until we see more. N/A

Nope. As is the case with most of the rookies and early career players we’ve covered. Here’s to a good first year in the NBA to Killian Hayes. If it happens we’ll start thinking further down the road. N/A