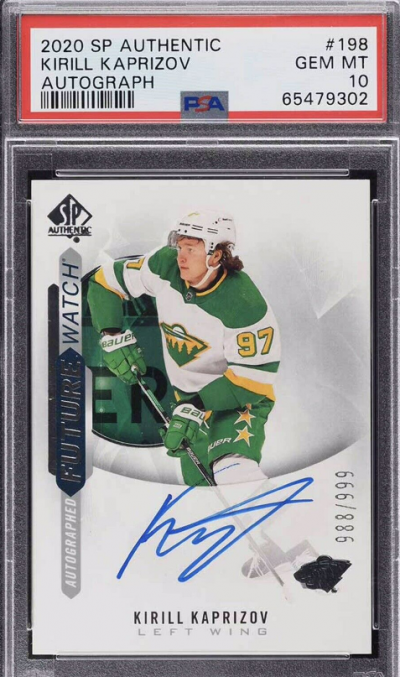 While much of 2021 rookie hype was focused on Alexis Lafreniere, it soon became clear that buying up the best Kiri Kaprizov rookie cards would be a much more lucrative endeavor. In his 27 games played in 2021, Kaprizov averaged almost a point a game. And in case you missed it 3 of those points came from his first-ever hat trick. Talk about a great way to introduce yourself to the NHL. But Kaprizov wasn’t done there. In 2022 the Wild’s phenom has solidified himself as a bona fide star with a whopping 47 goals 61 assists in the regular season. Yep, this kid is FOR REAL.

When it comes Kirill Kaprizov rookie card options, there are many available from his pre-NHL days. And just like the “draft pick” cards in other sports, these can still be quite valuable. Meanwhile, Upper Deck has plenty of great options for folks who are looking to make a hefty investment. So if you missed out on a chance to grab one before he blew up, take a few deeps breaths. It’s not too late to make up for lost time! Kaprizov has PLENTY of scoring left in him. Meaning, you’ll have plenty of room left to make some good profits off one of the following cards! 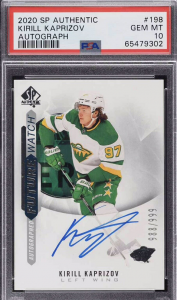 When it comes to the highest valued Kirill Kaprizov rookie cards, SP Authentic wears the crown. The card offers a crisp, clean look and has a print run of 999. In addition to the style and the ink, SP offers a great look at Kirill in action showing off the finesse that propelled him to instant stardom. At the end of the day, this is THE card to buy if you can swing the lofty price. While the price may cause you to hesitate, just imagine what you’ll be able to sell it for down the road if he keeps it up. 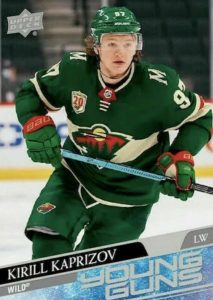 One of the first and best Kirill Kaprizov rookie cards from Upper Deck, Series 2 Young Guns is a true force to be reckoned with. As we mentioned in our Alexis Lafreniere rookie card review, this card is a favorite among hockey card collectors and it’ll be no different with the one shown above. The card features Kirill gracefully skating down the ice in his brand-spanking-new NFL uniform. Simply put, this is one of the most attractive first-year Kaprizov cards out there. 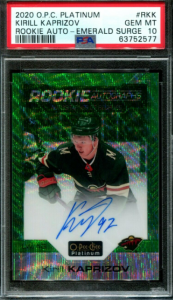 When it comes to the best Kirill Kaprizov rookie cards, only SP Authentic can match OPC Platinum. Especially the Rookie Autographs line shown here. Simply put if you’re looking for a high dollar investment this is your first stop. With a variety different parallels to chose from all featuring Kirill’s signature the main problem you may run into is whether or not you’re prepared to empty the war chest on one! In addition to the rookie auto line, take a look at the many valuable base card parallels such as the Seismic Gold. Casual investors would do well to grab a base card or one of the more common parallels. 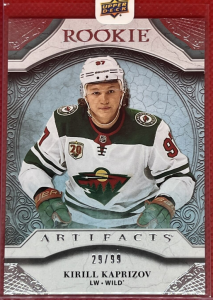 Now that the flood of rookie redemption tickets have started to take their true form we can see that this set offers a swell looking Kirill Kaprizov rookie card. Rather than going with the flashy style, Artifacts takes a business like approach with a simple picture of the top goal scorer that screams “let’s get it done”. Anyways, a perfect card for moderate to casual collectors. 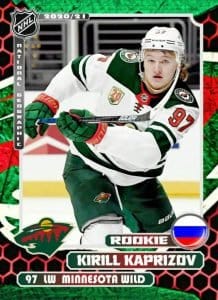 It’s not every day you see Nat Geo show up on a hockey card! Nonetheless, here we are. HH Cards out of Belarus makes this rare Kirill Kaparizov rookie card that happens to be one of the most valuable you’re gonna find at more than $600 for an ungraded. The print run for this one is only 9 so you’re not going to see it show up too often. Be prepared to pounce on it when it does! 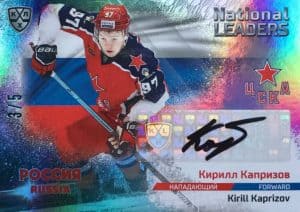 A card that harkens back to Kirill’s time in the KHL that includes his autograph. Although quite rare (only 5 made), the value is surprisingly reasonable at somewhere around $100. By far our favorite option for casual investors. 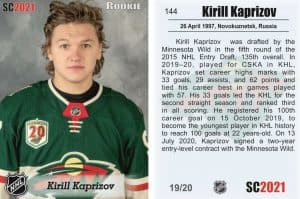 Here’s another card that features Kaprizov in his Minnesota jersey. Nothing fancy, just a photo of the NHL rookie with a look on his face that leaves us with the impression that he wasn’t scared of the new competition. Not in the slightest. There are 20 of these cards available and you should be able to snag one for less than $200. 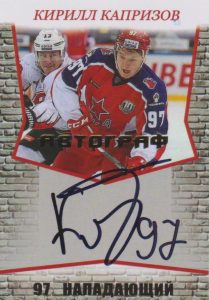 A /10 card that includes an autograph and features an image of Kirill playing hockey plastered onto a brick wall. TOUGH CARD! Some of the best Kirill Kaprizov rookie cards that most casual investors can afford to pick up. Got $100? Go grab one! 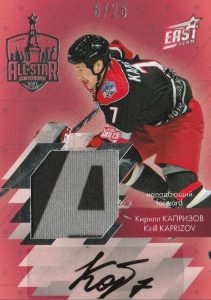 As you may have noticed, we’re including all pre-NHL cards as “rookies”. This is another one from SeReal, this time from the 2015-16 KHL set. To keep up the trend this is another card right in that $100 range. Lookswise, it’s the best card on the list featuring a Kaprizov aggressively skating in front of a red background.

We like many did not see this one coming. But judging by his performance in the KHL, maybe we should have. Either way, we’re onto Kirill now and don’t expect things to slow down anytime soon. Talent aside, playoff success will go a long way to decide the fate of a short-term Kirill Kaprizov rookie card investment.

With talent like his and a winning team around him it only seems like a matter of time before Kirill is in the finals. While the Wild’s 5th round pick from the 2015 NHL Entry draft is certainly turning some heads, this is the ultimate goal. If Kaprivoz continues to perform, better believe he’s more than table of leading the Wild to not one but many Cups.

Since he came into the league in his mid-twenties the career record books may be out of the picture. That said, titles and a few Hart Memorials would go a long way to make up for it!