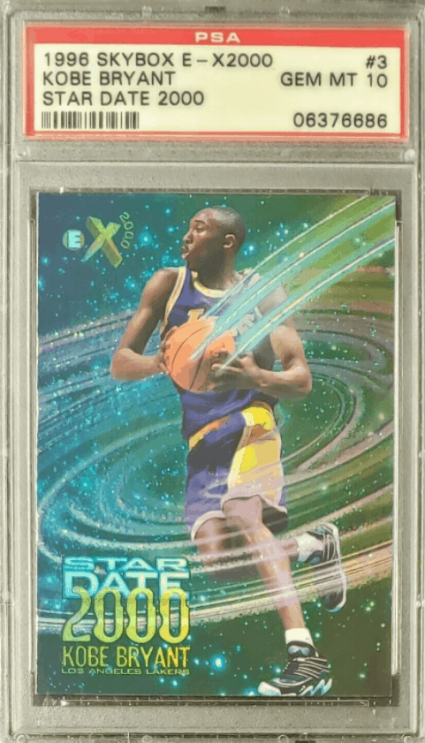 If you’re here, you’re probably searching for the best Kobe Bryant rookie cards the world has to offer. That’s good because we have a few options for you below. But first, let’s take a few seconds to remember Kobe’s greatness!

Kobe Bryant (aka The Black Mamba, aka KB24) was drafted by the Los Angeles Lakers with the 13th overall pick in the 1996 NBA Draft (talk about an absolute steal!)

Kobe Bean Bryant was born on August 23, 1978, and passed on January 26, 2020, in a tragic helicopter accident. He was an American professional basketball player and was considered to be one of the best players of all-time (some experts have him in the top 10 of all-time).

His first year was somewhat average as Kobe only averaged 7.6 points per game. That didn’t last long as he went on to average 15.4 points per game in his second year and then 19.9 in his third year )at that point it was safe to say he was on his way to NBA stardom).

The top Kobe Bryant rookie cards are not only a good bet in the short term, but also an excellent long term investment. In fact, some would say that you would be downright crazy not to have a few Kobe rookie cards in your sports card investment portfolio.

Here are the best Kobe Bryant rookie cards to invest in (and hopefully watch your money grow to new heights and retire early!). 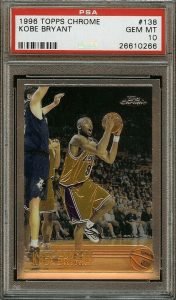 If we could only buy one Black Mamba rookie card this would be it… no questions asked.

Also full disclosure: we have bought a total of 9 of these bad boys and plan on picking up a few more when we see a bargain.

The 1996-97 Topps Chrome  #138 Kobe Bryant Lakers Refractor version is our white whale but that will cost us an arm and a leg (we are still saving up for that purchase). 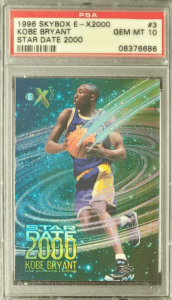 After how much we just gushed over the last card, it may be hard to believe that we’re even more fond of this one. Nevertheless, it’s true. Although not as valuable as the Chrome version of the 1996-1997 Topps, it’s certainly close.

But how valuable the card is may not be what attracts us to this card the most. Nope, it’s the cosmic background! We love looking up at the stars and this is a card that perfectly balances two of our favorite hobbies. Don’t get us wrong, you won’t catch us walking around in one of those NASA t-shirts anytime soon. But for us, a night with the telescope can be just as fun as a high-end case break! Nothing wrong with buying a card with personal meaning. 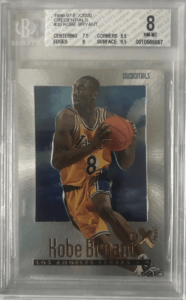 Not a bad card but then again it fails to compete with the 1996 Topps Chrome Bryant rookie card.

We have not purchased any of these cards nor do we plan to do so. Unless we find it at a dirt-cheap price, that is. 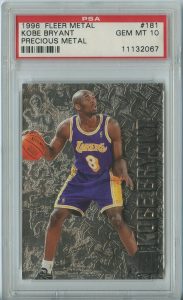 Often overlooked, this one of the top Kobe Bryant rookie cards is this stunning gem from Fleer Metal. As you can see, the card’s background lives up to its name by brining a bold metallic look that perfectly compliments the graceful ball skills Kobe featured in the forefront.

In addition to style, there’s something else this card has going for it. VALUE. As with all of the other cards on this list the 1996 Fleer Metal is more than capable of brining home the bacon. And while not as valuable as some, it makes for a PERFECT grab for anyone who isn’t willing to go all out on their investment. All around this one only ranks behind the 1996 Topps in our book.

Other Kobe Bryant Cards to Look Out For 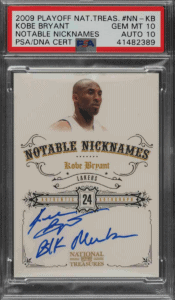 As we illustrated with our review of the Larmar Jackson rookie card options, National Treasures knows what they’re doing when it comes to the up and coming superstars. Clearly they were right about Kobe. This bad boy sold for $30,100 in February 2020 and thus made a name for itself as one of the best Kobe Bryant rookie cards out there. 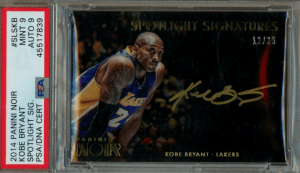 When it comes to Kobe Bryant non-rookie cards, this is our favorite set. The card shown above is just as valuable as the National Treasures we just talked about. As we said, we still have our eyes on a Topps Chrome rookie card so a $30,000 investment in the card above is not an option. However, the Gold Ink Auto from this set is much more doable.

Now that the NBA season is over, we should see an opportunity to buy low on basketball cards in general. And when it comes to basketball cards, you should always have a Kobe Bryant rookie card on your mind. If you buy today, there should be plenty of opportunities to sell at a profit in the short term. 9/10

Kobe rookie cards should see a steady rise over time and should perform better than most rookie cards only besides a few (i.e. Michael Jordan Rookie Cards, Derek Jeter, Ty Cobb Rookie Cards). So when we lengthen the investment period to up to 5 years, the card should outpace the market. Which if you’ve watched the market lately, that means BIG returns. 9/5/10

We tend to reserve long term investments to true icons of the respective sports. Well, Kobe definitely fits that description. At the end of the day, there are very few NBA legends that are more iconic than this man. So if you’re going long, rest easy knowing you have your money stashed away in one of the most lucrative long term investments in the sports card market. 10/10

Check out our review of the top Peyton Manning rookie cards!