If you’ve recently purchased a Kyle Pitts rookie card there’s plenty of reasons to be optimistic about your investment. For starters, there is no question that Kyle Pitts was one of the most dominant receiving forces in college football last season. While he was on the field, that is. Secondly, he’s now part of a high-octane offense in Atlanta that loves to move the ball through the air. Oh, and did we mention that Pitts is a 6’6″ 240-pound monster that runs a 4.44-second 40-yard dash?  Safe to say the Falcon’s new tight end is ready to elevate the ever-changing position to the next level. Let’s take a closer look at what Pitts has accomplished so far.

In 2019, Kyle Pitts burst onto the scene with a head-turning season as a sophomore. That year folks across the SEC started to notice the athletic ability behind the 54 receptions for 649 yards Florida’s emerging tight end put up. However, it wasn’t until 2020 that Pitts became a household name. As the main event to the 2019 preview, he would follow that up with 43 receptions, 770 receiving yards, and 12 TDs. What makes the season even more remarkable is the fact that Pitts did this in spite of only playing in eight games.

And let’s not forget about the big game performances. In the opening week of the 2020 regular season, Kyle Pitts had a game that undoubtedly played a role in increasing his profile. In Florida’s 51-35 victory in Week 1 over Ole Miss, Pitts hauled in 8 receptions for 170 yards and a jaw-dropping touchdown. But Pitts wasn’t done there. He would have another MASSIVE game in Week 6 against Kentucky where he tallied 3 touchdowns and 99 yards on just 5 receptions. And on one of the biggest stages of his career, Pitts would have a stellar performance in the SEC championship against Alabama with 7 receptions for 129 yards and 1 TD. As you can see, it’s no wonder why Pitts was drafted by the Atlanta Falcons with the 4th overall pick in the 2021 NFL Draft. Now let’s take a look at some of the first Kyle Pitts rookie cards to hit the market!

Question of the day……

Who will have more receiving yards in 2021, Kyle Pitts or Jaylen Waddle?

The card shown above is the Blue Shimmer Prizm. It’s one of our favorite investment options from the set and can be picked up for between $200 and $300. And that’s with an autograph. One thing that stands out immediately is the blue shimmering edges that surround the photo (hence the name). In our opinion, it makes the card just scream “BUY ME NOW”. Additionally, the color pattern blends in perfectly with the baby blue Florida Gators jersey worn by Pitts in the picture. And don’t forget about that photo of Pitts who’s looking like he’s ready to go straight through the next sorry individual that tries to tackle him. There are only 27 of these available so if you can’t find one try going with the base autographed versions for less than $100. 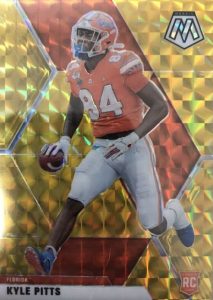 You won’t see a whole lot of Kyle Pitts autographed cards from this set on the market at the moment as most are waiting on the Panini redemption process. However, there are some great non-auto options you can pick up on the cheap while you’re waiting. Check out the Gold Prizm /10 above. Sure there’s no autograph, but what it does have is a print run of only 10. And for less than $100 you can make it yours. Easy decision if you ask us! 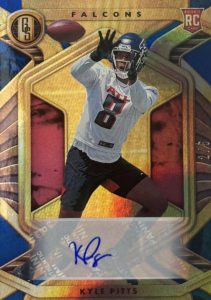 Finally, a set that features Pitts in his new Falcons uniform. Even if he’s just in practice gear making a routine catch, it’s still nice to see. Gold Standard recently hit the shelves and we’re already seeing some big values in terms of Kyle Pitts rookie cards. The one above has an autograph and a print run of just 5. Therefore it’s no surprise to see values for this card well north of $500. A breakout rookie year in ATL could easily double that price tag. 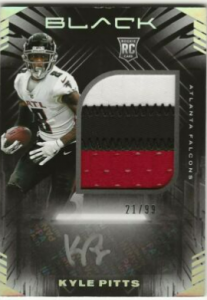 Just like the Gold Standard set we just mentioned, Panini Black is a limited collection with a bunch of high priced cards. For instance, some of the rarest autographed Kyle Pitts rookie cards are already valued at more than $1,000. Meanwhile, a more common auto like the one shown above is valued at around $200 for a non-graded version. At any rate, the is no shortage of moderated ranged investments here. If Pitts becomes more consistent down the stretch expect those prices to only increase.

As far as looks go, Panini Black is true to its name and offers plenty of darker shades within its borders. If you’re not big on sparkling prisms and bursting colors, this is a collection you’ll love. You just might have to buck up a bit if you’re hoping to dive in! 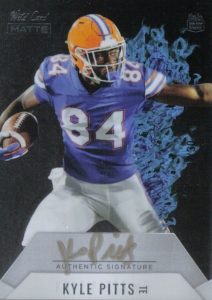 Just like the last card, the consistency within this one can be seen right away as the blue flames match up perfectly with the blue Florida Gators jersey they’re feeding off of. The matte texture also compliments the overall look of the card as the “on fire” Pitts really seems to jump right out at whoever’s lucky enough to behold this masterpiece. Okay, masterpiece may be a strong word for a football card but it’s a pretty swell item nonetheless. Pick one up for under $100 with an autograph! 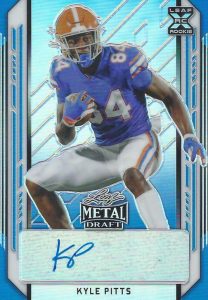 We’re going to go ahead and stick with the blue parallel theme we have going here and hit you with this /35 Blue Autograph from Leaf Draft. Once again the blue hues of the card blend in nicely with Pitts’s home uniform. Meanwhile, the photo of Pitts really stands out and shows off his freakish athleticism. At around $75, this is one of the more affordable Kyle Pitts rookie card autographs in the set as others, such as the Gold, are worth nearly $300. On the other hand, you can find quite a few options under $50 as well.

Regardless of Atlanta’s 4-12 record last season, they were still one of the best passing offenses in the league. Something that bodes well for those hoping Kyle Pitts will put up big numbers his rookie season. He’s big, strong, fast, and has hands that rarely drop a pass. All of this signals big returns on your short-term Kyle Pitts rookie card investment. 8/10

Sure, big numbers will keep Pitts’ stock high in the short term, but to see some REALLY big gains we’re gonna need some playoff success or stand-out individual accolades. Matt Ryan and the Falcons have been no stranger to winning over the years. And now that they have Pitts and a draft class many pundits are excited about? Let’s just say a full rebuild and another deep playoff run are real possibilities over the next few years. 7/10