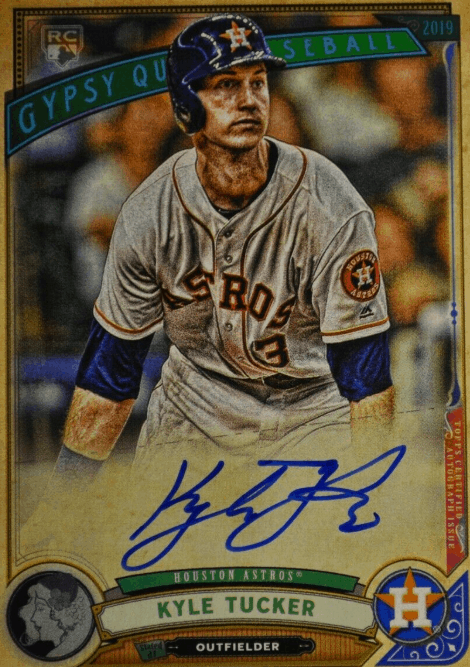 If you’ve been going back and forth on whether or not to buy a Kyle Tucker rookie card, what we saw in 2020 had to be encouraging. Tucker finally got a real chance to show what he could do against MLB pitching and he definitely DID NOT disappoint. While the average wasn’t what we saw from Tucker in the minors, the power and speed were both there with 9 home runs and 8 stolen. In any other year but 2020, that pace would have come close to a 30/30.

Worried about digression? Most of the folks who do projections for a living believe we’ll see a similar performance from Tucker 2021. If that happens, a Kyle Tucker rookie purchase today will look really good in about 6 months. And if he improves on that 2020 season? Even better!

The Case for a Kyle Tucker Rookie Card Purchase

Anyone who’s followed the young career of Kyle Tucker likely understands that the kid has nothing left to prove in the minor leagues. And that may be an understatement. Over the past 4 seasons across various levels, Tucker has absolutely OBLITERATED aspiring MLB pitchers. During that span, he’s averaged 23 home runs and 87 RBI in just 441 ABs per season. And it wasn’t only minor league pitching he obliterated. Kyle Tucker was also a bane to the young backstops, stealing an average of 26 bases over those 4 seasons.

And as we mentioned earlier, 2020 is exactly what Tucker needed to get those first couple tastes of the big leagues off his mind. In his first test again MLB pitching in 2018, the poor kid straight FLOUNDERED. The result of that experiment was an abysmal .141/.236/.203 triple-slash line and another year on the farm. However, Tucker faired much better in his second chance hitting .269 with 4 home runs and 5 swiped bases over just 67 at-bats. But before he could REALLY get going, the season came to an end and his wait for true MLB success was prolonged for another year.

Now that speed/power combo that has scouts, fantasy owners, and card collectors salivating is finally locked in for a full season worth of playing time. So if you think Kyle’s gonna live up to or surpass the projections, here are some of his rookie cards that may be a good idea. 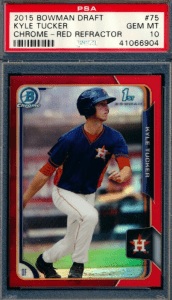 Nothing really stands out about this card. It shows some kind of follow-through swing from an almost lackadaisical looking Kyle Tucker. And don’t even get us started on that helmet that looks too big for his head. But you know what does stand out? The card’s VALUE. With some of the rare parallels going for well over $500, this is the Kyle Tucker rookie card for those looking to make a sizable investment. 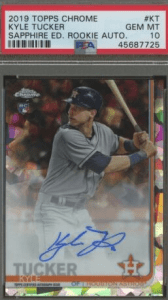 Looks-wise, a big improvement from the Bowman Chrome we just talked about. This one shows a laser-focused Kyle Tucker awaiting the next delivery. Hopefully, he’ll send it back where it belongs…..THE BLEACHERS! At any rate, this card has the potential to be worth a pretty penny depending on its condition and autograph/refractor status. A decent little investment option for those with a moderate mindset. 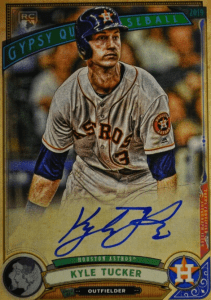 Now when it comes to style, no other card on the list even comes CLOSE to the Gyspy Queen. However, when it comes to value, there are plenty of options the casual collector can get on board with. Less than $50 should get it done for most of the parallels. 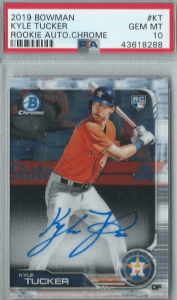 Far and away a better-looking card than the version Bowman offered 4 years prior. Similar to the Topps Sapphire of the same year, the card features a laser-focused Kyle Tucker who appears ready to launch one into orbit (or at least into the first row of the bleachers). 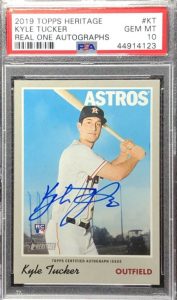 Heritage has proven to be a set collector’s flock too so if you’re looking to add a moderate ranged Kyle Tucker rookie card to your portfolio, this is one to STRONGLY consider. Just a couple of hundred bucks should get you one with an autograph with a PSA 10 grade slapped across the top.

Speaking of young players who appear ready for a breakout…..

Compared to other prospects who are still in full hype mode, post-hype Kyle Tucker’s rookie cards are nothing but a BARGAIN. Even with that encouraging 2020 season. Take Jarred Kelenic for example. Kelenic has only one monster season of minor league production on the resume. Compare that to FOUR for Kyle Tucker AND a decent MLB season under his belt. The difference?  Jarred Kelenic rookie cards are FAR more valuable. Expect a strong performance in 2021 to close the gap. 8.5/10

The power-speed combo looks great and we can’t help but think the average and OBP will improve as Tucker becomes acclimated to the big leagues. Additionally, he plays on a great team that likely has a good postseason run in it over the next few years. Individual and team success should drive prices up during this span. 8/10

Look, Tucker has done nothing but produces at every stop along the way in his young career. However, we’d like to get an idea of how he handles things in 2021 before we think any longer than a few years down the road. If he brings that average up to what it was in the minors and has a 30/30 season we’ll certainly look to stash one away. 6/10