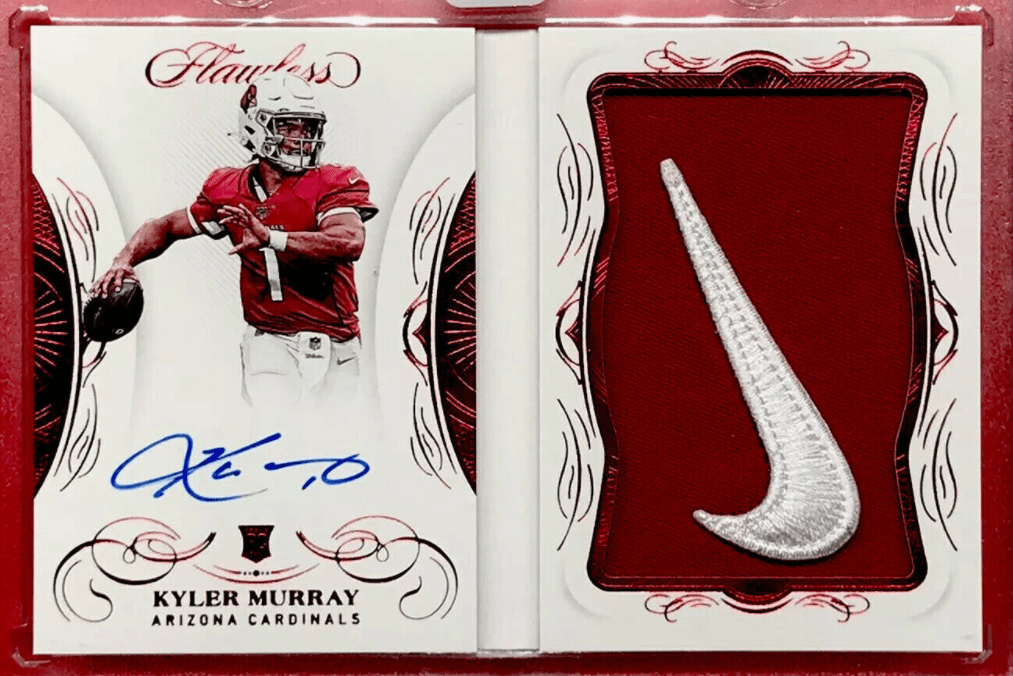 Now that we’re nearly done with yet another NFL season, now’s as good of a time as any to check in on the Kyler Murray rookie card market. While there were definitely some struggles, you can’t help but be pleased with Kyler’s 2020 performance. Despite the seesaw performance, Murray was been able to average nearly 250 yards through the air per game and connected on 26 TD passes. And let’s not forget the running. Murray ending up finding the endzone on his feet a whopping 11 times, racking up more than 8-00 yards rushing in the process.

After seeing what the young QB was able to do his first year in the league, We’re thrilled to see he took a step forward in just about every category in 2020. Therefore, an investment in a Kyler Murray rookie card going into the 2021 season seems like a swell idea. If Murray continues to improve (all signs point to YES), 2021 could be the year when his first-year cards REALLY go crazy.

However, it’s always a good idea to get a grasp on what’s out there before departing with any of your hard-earned cash. But, before we get into some of Kyler’s top rookie cards, let’s take a refresher course on the road that brought Murray to where he stands today. As they say, past performance doesn’t GUARANTEE future results, but it sure can be a pretty solid indicator!

Kyler Murray:  The Story So Far

Simply put, the guy is a born athlete.  In fact, he was drafted by the A’s at number 9 overall in the 2018 MLB Draft. Perhaps the .296/.398/.556 triple-slash line and 10 home runs in just 189 at-bats as a left fielder for the Sooners had something to do with that. But as impressive as his 2018 college baseball season was, his 2018 college football season was even more impressive.

After spending 2015 and 2017 in relative obscurity (he sat out 2016 due to transfer rules), Kyler unleashed fury upon the Big 12 in 2018. And that’s putting it lightly. Over the course of the season, Murray gouged defenses for 4,361 yards through the air and another 1,001 on the ground. Gulp. Oh, and that manic display also resulted in a combined 54 touchdowns (42 passing) and a passer rating of 199.2. While this performance wasn’t enough to propel the Sooners to a national championship, it did earn Murray the Heisman Trophy. And perhaps more importantly, it earned him the number 1 spot in the 2019 NFL draft.

Once taken first off the board in the draft, Kyler Murray wasted no time getting his NFL career started and secured the starting gig for the Arizona Cardinals in his rookie season. And for the first season as an NFL starting quarterback, it was solid. The rookie wasn’t able to mimic his gaudy college numbers, but he did display that impressive arm/leg skill set that got him drafted #1 overall. And he stayed on the field! After starting all 16 games, Kyler Murray ended up with a respectable 3,722 yards through the air and another 544 on the ground with 24 combined TDs. Not too shabby! And when it comes to 2021, we already mentioned how Murray is picked up right where he left off in 2019. And then some.

That brings us to the topic of a Kyler Murray rookie card investment. If Kyler can continue this trajectory, chances are you’ll be glad you bought a couple. So without further ado, let’s see what’s available!

A Review of the Best Kyler Murray Rookie Card Options 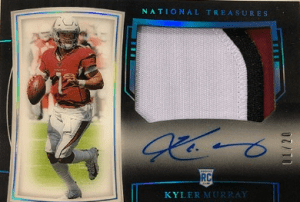 These are the epitome of Kyler Murray rookie cards. The most valuable of the lot are incredibly rare, and quite frankly, incredibly beautiful. So much so in fact, many of the cards from this set seem to have no trouble bringing in well over $5,000 at the auction house!

As with any set, there are more affordable options with many landing in the $200 or below price range. However, you’ll likely need to sacrifice the patch and or the autograph and seek out a more common parallel. 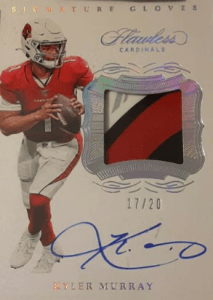 Nobody does the card/memorabilia combo like Panini and the Flawless collection is a great illustration as to why. These are some of Kyler’s most valuable rookie cards and many include some sort of in-game material patch. On top of that, some of the cards have Murray’s signature, which can drive the value up even higher. While the one shown directly above is a dazzling card, the one at the VERY top of this page is second to none, looks-wise.

Plenty of high-end options over $3,000 in this set if you’re looking to go big. If not, there are some great options for just a couple hundred bucks or less (just like with National Treasures you’ll need to make some sacrifices!). 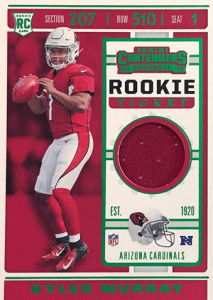 Just like the Tua Tagovailoa rookie card from Panini Contenders, these feature a “rookie ticket” and can be very expensive. In addition to the ticket, the card shows the QB’s height, weight, and year of birth. Did you know that at 5 foot 10 inches, Murray is the shortest QB to be drafted in the first round of the common draft era? At least that’s what the card says!  We assume they got their facts straight.

For the most part, we like this set for its wide variety of cards in that moderate $500-$1,000 investment range. Almost endless! 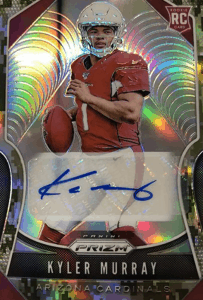 Panini Prizm is one of the most popular sets for Kyler Murray rookie card collectors. Some can be incredibly valuable, with a few surpassing the $5,000 threshold. That said, we love this set because it offers plenty of options regardless of what you want to spend. Hence its overall popularity.

The base card features Murray standing tall in the pocket, perhaps about to make a decision on whether to let the ball fly or take off for an easy first down on the ground. Either way, it’s a nice-looking card that has had no problems catching the attention of collectors. 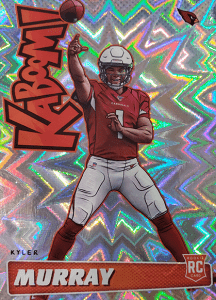 Panini KABOOM does not appear to be a passing fad by any means. The cards feature an in-your-face action shot of Murray in front of an explosive backdrop. Oh, and they’re quite rare. Which makes for one valuable collector’s item. Some of the rarer options can sell for more than $5,000 in the right condition. Either way, it’s not a card for casual investors as you’ll likely need to come up with at least $500 to get your hands on a decent KABOOOOOOM! 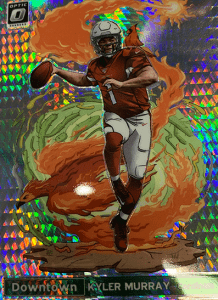 The Donruss Downtown insert is the answer to the Panini KABOOM. Just as cool but it won’t cost you nearly as much. So if you don’t feel like spending your entire bankroll on a Kyler Murray rookie card from Panini, look to Donruss. For instance, many of the top-tier Optic cards can still be bought for under 4 digits (for now). And when it comes to optics does it get any better than the “Downtown” edition? We think not. 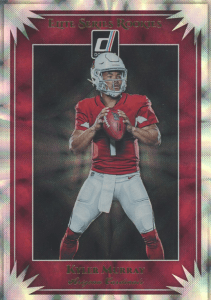 An affordable hobby box that can produce one sweet Kyler Murray rookie card. Even buying the Murray cards outright is an affordable endeavor as they can be had for just a couple of hundred. Not bad when compared to what we’ve seen thus far! 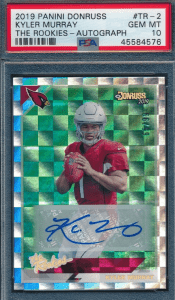 This card features a hologram of Kyler Murray and is most valuable when it includes an autograph. A perfect “10” rating by PSA or Beckett doesn’t hurt either! However, if you’re looking to throw less than $100 at one skip the autograph and hone in on a BGS or PSA 9. 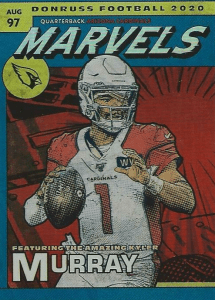 Not quite in the same league of coolness as the KABOOM or Downtown, but a force of nature nevertheless. The insert is as rare as it is cool, so there’s actually some decent value in it if you find the right buyer. For example, PSA 10s have been known to sell for over $1,000. Meanwhile, new ungraded cards can easily bring in more than $500.

Speaking of Heisman winners that were taken number 1 in the draft…..

We said this about Murray before the start of the 2020 season:  “with a full year of NFL experience under his belt, Kyler Murray seems poised to take flight”. And take flight he did. Especially with that new and improved ground attack. We expect more of the same improvement in 2021, hopefully ending with the young QB’s first taste of the NFL post-season. As things continue to trend in the right direction for Murray, that means one thing. Your short-term play on a Murray rookie card is doing the same. 9.5/10

Another reminder of what we said before the 2021 season: “Kyler set the stage for even better numbers in his second season. And more importantly, even more W’s. And when the numbers become Pro Bowl worthy and the win totals become playoff-worthy, you’ll be glad you invested”. Well, those numbers are starting to become a Pro-Bowl worthy and next year could see the Cardinals make a playoff run. BOTH a Kyler Murray Pro Bowl appearance and playoff berth for the Cardinals seem inevitable in the next few years. 10/10

Sure, Murray is absolutely oozing with potential. However, he still hasn’t taken the BIG step forward to join the ranks of the NFL elite quarterbacks. Judging by what we saw last season it’s only a matter of time before he does. If he takes that next step forward in 2021 we’ll be ready to stash one away for the long haul hoping there are some Super Bowls and MVPs in Murray’s future. And if Murray decides to become the latest 2-sport professional once he’s had some NFL success? Even better for your long-term investment! 7/10