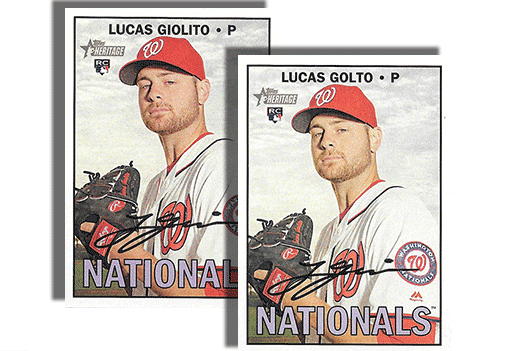 Now that baseball card collecting is about to heat up again, what better time to go over some Lucas Giolito rookie card options?  This is an interesting market at the moment because it’s one you can still get in on at a reasonable price. Not something you see every day for someone who has the potential to be a perennial All-Star. The question is will it pay off if you jump on in? While it’s impossible to know for sure, the best you can do is try to get an idea of what’s in store for the athlete in question. So let’s take a look at where Giolito’s been, and more importantly, where he may be going.

Like Giolito, here’s another pitcher who’s enjoying being the number 1 pitching prospect in the land: Review our MacKenzie Gore Buyer’s Guide!

With all the natural talent, it’s no surprise Giolito used to be the top prospect in baseball. He was armed with a deadly arsenal of pitches and had youth on his side, a combination that made scouts across the land foam at the mouth. And his minor league numbers weren’t bad either. In his first full season of A ball, Gilotio steamrolled his way to a 10-2 record. A record made possible by his stunning 2.20 ERA and 10.1 K per 9 rate. The next two seasons Gilotio continued to his minor league dominance and earned a call up to the big leagues by late 2016. But that’s where things started to fall apart.

Perhaps at age 21, Lucas Giolito wasn’t ready for MLB action. Over the 4 games he started in his debut season, Giolito was lit up to the tune of a 6.75 era and horrendous 1.75 WHIP. Needless to say, he soon found himself back on the farm. Only this time with the White Sox after he and fellow prospect Dane Dunning were shipped to Chicago in exchange for Adam Eaton (the things GMs will do to make a World Series run!). While his second stint in the minors was only mediocre at best, it didn’t last long as Giolito soon found himself pitching full-time for the White Sox.

The Beginning of a “Post-Hype” Comeback

The Major Leagues weren’t any easier the second time through. Not at first anyway. In 2018 Giolito logged 173 innings and came away with a ghastly 6.13 ERA (somehow he managed a 10-13 record out of that). But in 2019 something clicked that propelled Lucas Giolito to a breakout season, and surprisingly enough, an All-Star Game appearance. The name of that something? Control. In 2019 Giolito nearly halved his BB per 9 rate from 4.7 in 2018 down to 2.9. And while the control issues sprung up again early in 2020, Gilotio brought that down to a respectable 3.5 walks per 9 by the end of the season.

Point is, when he has his command, Giolito can be a bonafide ace. And if that’s what he’s going to become, it sure seems like the Lucas Giolito rookie card market is underbought! 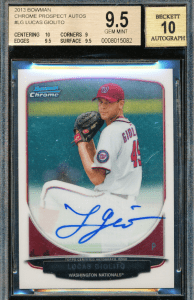 While not a true rookie card, it certainly is the most collectible. The card features the budding ace mid-wind up and ready to bring the heat. It comes in a variety of beautiful refractor styles and is available with an autograph. As far as value goes, you’ll commonly come across grade 10 REFRACTORS for well under $500. Yes, please. 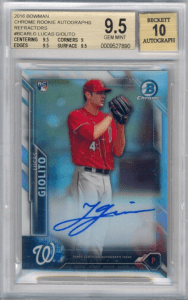 While the 2013 version is more of a “prospect card”, the 2016 is a true rookie card. There’s not much going on with this it,  just a photo of Giolitio in his big league apparel coming set on the mound. Regardless of the wow factor, the card is one of his most valuable. That said, there are plenty of Lucas Giolito rookie card options from this set that you can pick up for less than $100. ALL DAY! 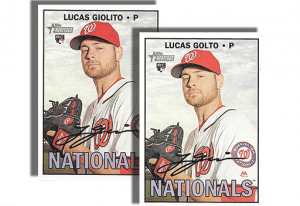 This one shows what appears to be an almost smug Giolito staring into the camera as if to say “yea, I know I’m the man”. Which is reasonable when you consider everything he had accomplished up until then. Needless to say, that smug look doesn’t resurface on any of his 2017 cards. Expect to pay somewhere between $500 and $150 if you want an auto 10 grade. 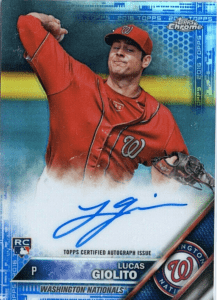 Don’t want to buck up for the Bowman Chrome? Then why not consider the Topps version! With a photo of Giolito captured right as he’s about to release the ball, it’s certainly a better-looking card than the one from the 2016 Bowman set that shares the same name. A couple of hundred bucks should get you a rare auto refractor in mint condition. 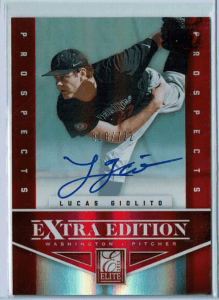 Leave it to Panini to get the jump on a hyped-up new rookie. This one goes all the way back to Giolito’s first year in the National’s system and features a confident follow-through and ice-cold stare. A 20 dollar bill should get you a signed one of these without a grade. Bump it up to $100 and you’ve bought yourself grade 10 auto. 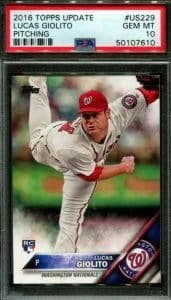 Not nearly as valuable as the Topps Chrome Lucas Giolito rookie cards so if you’re not looking for anything serious, here ya go. $50 should get you this card with an autograph and a PSA 10 label on it. You might even have enough left over to take the wife or girlfriend out for a delicious meal at Taco Bell afterward (just don’t go overboard on those hoity-toity steak items).

Remember before the 2020 season started and we warned about what Shane Bieber was about to become?  Well, the same could be happening with Giolito. If Giolito goes out there and continues to overwhelm batters in 2021, you’ll be happy with where you’re at a year from now. However, the CONTROL factor wild card does add some risk. 8/10

Just like Bieber, Giolito is coming off a breakout season. And also like Bieber, Giolito has an uncanny ability to miss bats. Sure he may not be able to match Bieber’s absurd 14.5 Ks per 9, but Giolito’s 12.0 rate isn’t too shabby either. The point is, the market for a Giolito rookie card still trails the Bieber market by quite a bit. If Giolito keeps pitching like he’s capable of, that will soon change. We expect good things in the years to come. 8/10

With an up and down career like Giolito’s has been we’ll wait and see how the next year or two play out before even considering this. N/A