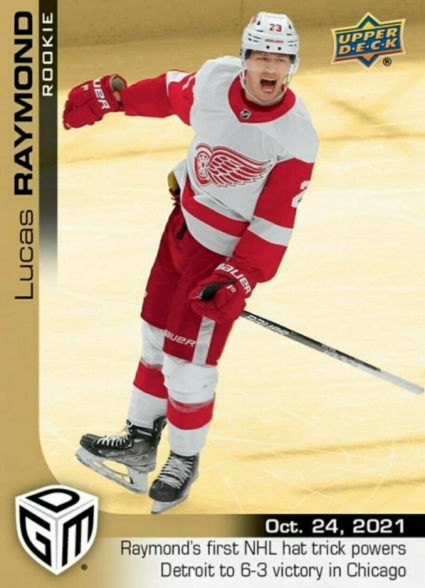 So far no other first year player is getting as much Calder Trophy attention as Lucas Raymond. Detroit’s rookie left winger is doing a great job at both putting the puck in the back of the net as well as setting up his teammates. Both good reasons to consider picking up a Lucas Raymond rookie card. And as the season continues, it only seems rational that Raymond’s production will improve as he finds more of a rhythm in his new league.

But what rookie card options are out there so far? While there certainly aren’t many, there are a few early releases that you can pounce on if you want to get in on the action super early. Time to find out what they are! 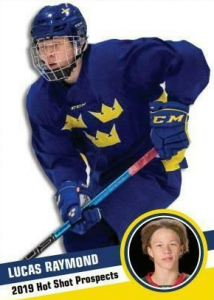 A super early release featuring Raymond from his time playing in Sweden. He’s got on the full blue uniform and seems to be casually skating down the ice looking to make a play. If you’re not a fan of frills, this card is for you. The only thing other than Raymond’s action photo is his name and a picture of his helmetless face at the bottom. Worried about breaking the bank? Don’t be! These should be available for just a couple of bucks AT MOST. 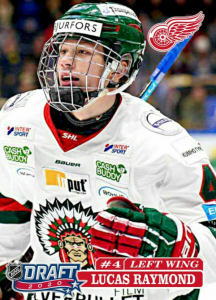 A card that celebrates Raymond’s first round pick status and features the Detroit Red Wings logo at the top right corner. In addition to the Red Wings logo, you’ll notice the 2020 NHL Draft logo at the bottom left hand corner. These have an incredibly short print with only 9 being available. That said, you can still pick one up for less than $30 if you happen o come across one of the 9. 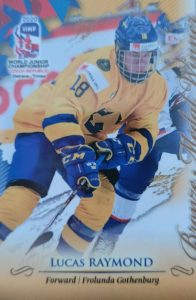 A card featuring Raymond in some of his final days before being drafted while still part of the IIHF. Raymond is donning his yellow uniform while focused on the puck. The IIHF logo is at the top right side and Raymond’s name and position is printed at the bottom. At the moment the value of this card is somewhere around $20.

Related Content: Most Valuable Hockey Cards From the ’80s 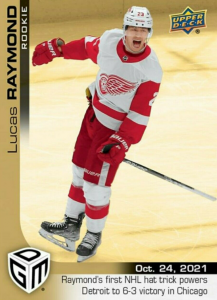 The first big name Lucas Raymond rookie card should be rolling out in the upcoming months and it’ll be the first that’ll be worth a decent about of cash. The card celebrates Raymond’s first ever NHL hat trick and features the winger in celebration mode after scoring one of those three goals. A feat we’re sure to see plenty of in the years to come. At any rate, there are only 100 of these printed and some can already be found on pre-sale with estimated value being somewhere around $200.

Detroit’s highest draft pick in 30 years has been living up to the billing so far in the 2021-22. And then some. Whenever a top 5 pick overall lives up to the hype right off the bat it insights confidence that he’ll be what fans and scouts were expecting. Watch closely as the season goes on but as it sits now it sure seems like there is more good things to come. If the goals keep piling up and some wins for the Red wings as well, we could see some nice gains throughout the season.

Let’s face it, by the time the major collections begin to roll out the Calder Trophy favorite may have already sent the market soaring. If you’re not liking the buy in price an offseason purchase would make plenty of sense. A big step forward in season two could really increase the value of your Lucas Raymond rookie card as collector’s begin to be more comfortable. Getting in on a buy low opportunity and waiting for Raymond to truly realize his potential may very well be the best way to go.