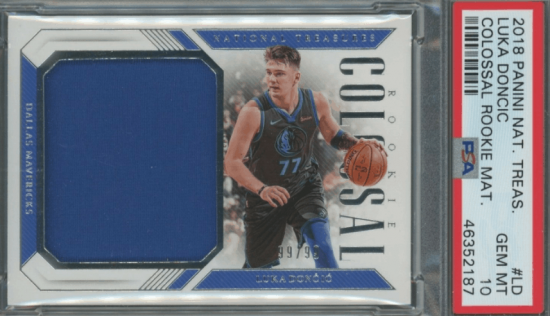 Hoping to find an investment opportunity on some of the best Luka Doncic rookie cards leading up to what could be his first ever MVP award? Safe to today we’re not gonna give you any pushback on that idea! In fact, we’ll most likely be joining you. And while you may have one specific card in mind, it’s always a good idea to begin your hunt with a few backup plans just in case. So if your first choice isn’t on the following list, go ahead and add these to your plan B strategy! 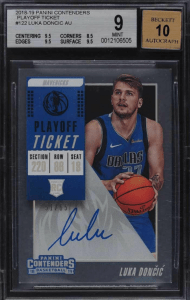 This beauty features Luka honed in on a free throw attempt that he’s surely about to swish. In addition to the photo, there’s a blue rookie ticket over the top left portion of the card. Meanwhile, the bottom left is cornered off nicely and includes the all-important on-card autograph.

By the way, there’s also a “ball at chest” variation that sells for similar prices. Another great option if you’re not a fan of the simple free throw shot photo. 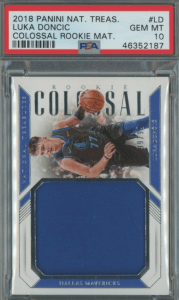 A great looking horizontal layout that features a giant materials patch across the left-hand side. Meanwhile, the right portion of the card features Doncic dribbling the ball and looking to make a play. When it comes to value, this is a great intermediate-level investment. Grade 10’s go for somewhere around $1,500 while lower grades and nongraded will sell for far under $1,000. 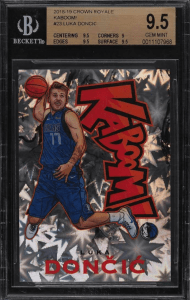 While KABOOM! inserts don’t include things like autographs or patches, they certainly have style. And lots of it. The cards feature our favorite players framed in a comic book/superhero style. As far as this Luka Doncic rookie card goes, the Mavs star player appears to be saving a ball from going out of bounds while hovering in mid-air.

They are SSP inserts in the Crown Royale set, so are unnumbered but did have a VERY limited print run. Which means they’re incredibly rare. In mint condition, they have previously sold for more than $7,000 on eBay auctions. 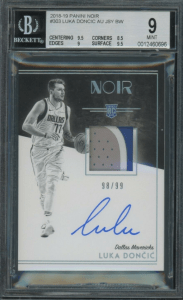 Now, this is a great-looking set of cards. While there’s plenty of amazing options here, we have our eyes set on #303 and #343. On both cards, Doncic is shown on the left side advancing down the court. Meanwhile, there’s a patch off to the right just above the on-card autograph.

Both have print runs of 99 and are serial numbered on the front of the card. There is no clear consensus as to which is more valuable, but both are capable of bringing in around $5,000. And that’s without a grade! Needless to say, a 10 grade will cost you far more than that. 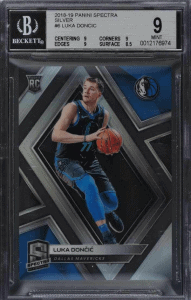 This is another great Panini set that is slowly becoming a MUST buy for serious collectors. While it seems like there’s is an almost unlimited list of different designs and parallels, the Silver Spectra shown above is one of our favorites.

From the back of the card: “Following up his November 2018 Western Conference Rookie of the Month performance, Doncic roared to the December installment of the award as well. He became the first Dallas player since Jay Vincent (1981-1982) to earn the honor more than once and the first Mav ever to be recognized in each of his first two months.”

Here we have some options that can be called “low hanging fruit”. At least when it comes to Luka Doncic rookie cards. Many will only cost you a couple of hundred bucks. And that’s with a smooth piece of material included. Not bad for a rookie card featuring one of the best players in the NBA. 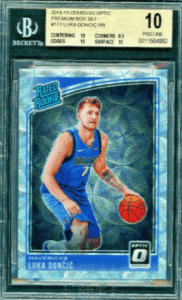 Without a doubt it’s gotta be from the Optic collection if you’re hoping to snag one of the top Luca Doncic rookie cards made by Donruss. Just take a gander at the eye-popping style and try to convince us otherwise. The cards separate themselves from the regular Donruss collection by offering a firm but smooth texture and an overall glossy look. However, one thing Optic shares with the regular Donruss set is the famous Rated Rookie icon! Safe to say it could hardly even be called a Donruss rookie card if that wasn’t there.

At his age, you can only expect Doncic to get better every season. So far that’s exactly what he’s doing. And when it comes to MVP voting, the odds makers believe there’s no better player in the game at this moment. Add a Mavericks playoff run to the mix and your short term investment will be in a great place. Such a good place that you might consider holding out for the even better things that are yet to come!

If he’s this good in his teens and early 20s, imagine what he’s going to look like in his prime. MVPs, NBA championships, scoring titles, it’s all on the table within the next 5 years. Doncic has arguably taken over as the league’s premier player so you’ll these options should continue to get attention from investors. Just imagine the price of the best Luka Doncic rookie cards when it’s no longer an argument. Yea, you’re gonna be one happy camper.

Doncic is at this point a generational type level of talent. While we’re certainly believers, it may be worth seeing if he can bring home a championship before you stash one away for the long haul. However, we won’t blame you one bit if that’s what you decide! Chances are you’ll wake up in 10 years and be very glad you didn’t sell in the short or medium term.

Other NBA Rookie Cards to consider: