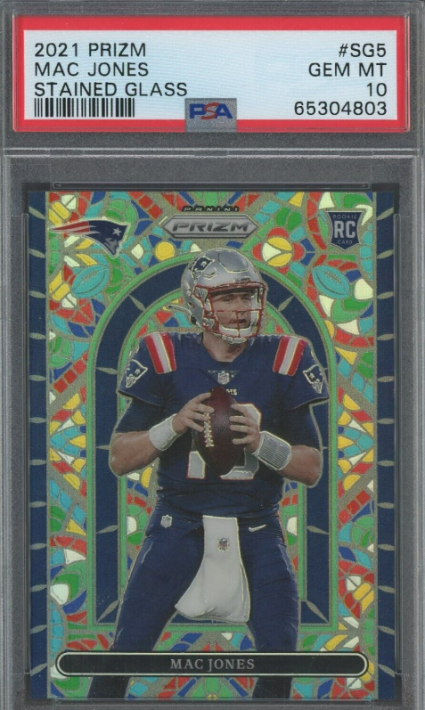 Now that he has a successful season under his belt, it’s easy to see why there are more than a few hobbyists looking to add a few of the best Mac Jones rookie cards to their collection. Could year two be a breakout season? With his skill set and a legendary coach calling the plays, the so called game manager could turn become a game WINNER in 2022. An attention getting pivot that would be great for anyone who owns a Mac Jones rookie card.

On a lighter note, the Patriot’s rookie QB has also grabbed plenty of attention for his unique walk-up when being drafted as many fans liken it to the walk of his new head coach Bill Belichick’s walk. While we’re sure Jones would have rather had his mind for football compared to Belichick’s, any comparison to one of the G.O.A.T.S of coaching has to be a good thing. Right??

At any rate, Mac Jones has a great arm and tremendous pocket presence. Tools that one day might allow Mac to draw comparisons to New England Patriots legend, Tom Brady. Ok, that’s a stretch but we’re optimistic! Either way, it’s a comparison both Mac Jones and the top Mac Jones rookie card collectors would certainly love. Speaking of those, here are the best options that have been released so far.

Question of the Day: Will Mac Jones or Trevor Lawrence go on to be the better QB? 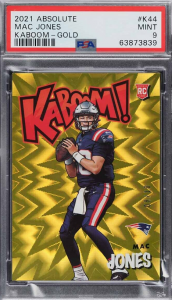 Does it get any better than the KABOOM insert? We think not. It’s flashy, fun, rare, and best of all – incredibly valuable. Safe to say these cards will see major gains if Mac turns the corner. Something we’re all hoping for!

There is a variety of Prizms to choose from so just figure out how much you’d like to spend and have at it! 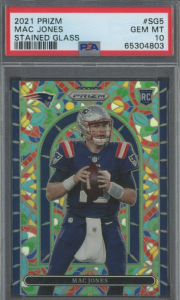 What can we say about Panini Prizm that we haven’t said before. It’s THE collection as far as football cards is concerned. And as far as basketball cards go too for that matter. Anyways, it has been the dominant force in both industries for some time now and continues to build its legacy with the 2021 collection.

When it comes to the guy above, the set holds some of the hottest Mac Jones rookie cards you’ll find on the market. Whether it be a a rare Prizm like the card above or an autographed card you’ll have no problem finding something you can dump some big time cash into.

On the other hand, the base cards along can be worth a decent amount when it comes to 2021 Panini Prizm. So if you’re a casual collector try honing in on a few of those. If Mac ends up establishing a dynasty in New England similar to that of his predecessor safe to say you’ll be glad you did! 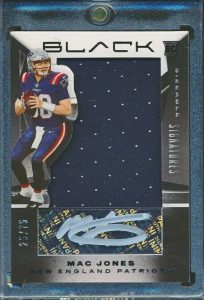 So far some of the great collegiate sets from Panini and Leaf are already on the shelves and feature some great Mac Jones prospect cards. However, now that collections like Certified and Gold Standard have arrived, and Panini Black we no longer have to settle for just cards featuring Mac Jones in his college days. Some of the biggest sets of the year will be arriving later in 2021 and we’ll be sure to keep you updated. 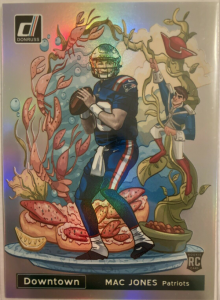 The 2021 Donruss Football collection is finally here and it does not disappoint. Armed with an array of stunning inserts, rare optic parallels, and legendary “Rated Rookies” the set is a must collect for anyone serious about the hobby. And for anyone serious about scoring a stylish Mac Jones rookie card. Just take a look at the Downtown Insert shown above. These remain incredibly popular and due to their rarity, incredibly valuable. Expect to pay somewhere around $1,000 at the moment if you’re looking to get your hands on one. Meanwhile, there are plenty of Mac Jones base cards that will set you back just a few bucks. 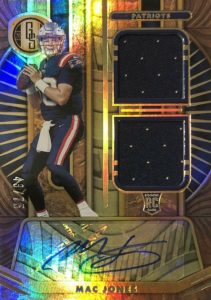 Gold Standard has set the bar high when it comes to QUALITY Mac Jones rookie cards. There is so much to work with in this set. The Dual Patch /75 autographed card above is one of our favorites if you’re looking for a higher-end investment. Meanwhile, seek out the higher numbered non-autos if you’re wanting something a little more casual. Either way, if Mac Jones delivers you’ll own a card that many collectors are going to covet.

Panini Legacy offers some great options if you like your cards with a little bling. For instance, that Under the Lights insert almost makes you think you’re staring at an expensive engagement ring rather than a football card. Anyways, some of the autographed cards like the one above and the “Rookies” hold some good value. Meanwhile, non-autographed cards are the way to go if you’re looking for a casual investment. 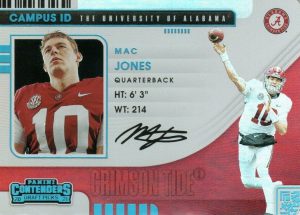 We’re loving the Campus ID insert shown above and we’re not the only ones. These have been selling regularly on eBay since their arrival and they hold quite a bit of value if you’re looking to drop a few hundred bucks on your Mac Jones rookie cards. Other great high-end options include any of the College Ticket autographed cards and the Mac Jones/Jaylen Waddle Collegiate Connections insert. 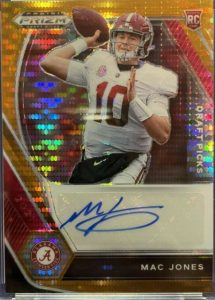 The much anticipated Prizm Draft collection has finally arrived and boy does it include some amazing Mac Jones rookie card options. For instance, take a look at that Orange Pulsar Prizm above. It’s got a print run of just 49, comes autographed, and features Jones doing what he does best: slingin’ the football. With features like that, it’s no wonder the Orange Pulsar is one of the more valuable Mac Jones rookie cards in the set. However, there are some more valuable if you’re looking to go even bigger and PLENTY of more casual investment options. 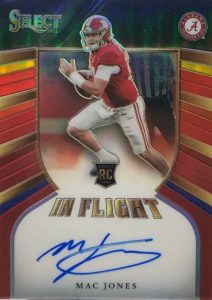 It’s hard to beat an early look at the Select collection as an insert of the 2021 Panini Chronicles Drat set. The Mac Jones card above shows the young QB on the run and looking to make a big play happen. Hence the “In Flight” tag to the insert. There are few different versions of the card, but some can easily exceed $400 in value. On top of the Select insert, there are plenty of options to choose from in the standard Chronicles Draft collection. 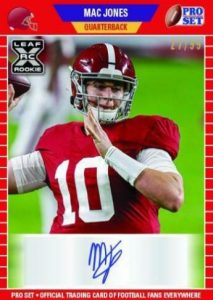 Donning the Pro Set’s new outline, Mac Jones is pictured here making a quick throw judging by the arm angle. By the way, we love how Jones is actively throwing the ball instead of just standing in the pocket analyzing the field like so many other QB cards. In addition to the cool photo, they were also one of the first rookie cards produced for Jones so it’s easy to imagine why these are a hot commodity.

As far as value goes, some of the rarest from the collection that also has autographs are going for over $1,000. However, there are plenty of options available for less than $50 if you’re looking to take a casual approach. 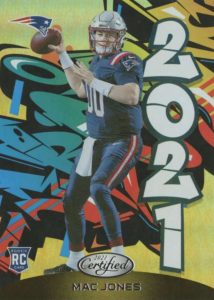 Panini Certified is one of the first collections to feature Mac in his new Patriots jersey and. Something fans have been patiently waiting for. And now that Mac is starting from Week 1, that Patriots jersey makes the card seem even better. There is plenty to like in this set. If you’re looking for something flashy check out the 2021 insert shown here. Meanwhile, if elegant is what you’re after the Freshman Fabric line should deliver.

While this may not seem like a true budget play, it should be considered one when compared to the competition at the top of the list. It has similar qualities and features of those cards while being at a much lower price point. However, if you REALLY want some Mac Jones rookie cards on the cheap, keep reading the next few cards are very easy on the wallet.

Compared to the Pro Set Mac Jones rookie card we just looked at, Score offers more affordable prices. For instance, some of the ultra-rare parallels with an autograph can still be scooped up for less than $500. And if you can forgo the signature, you can even get something like the /100 showcase card featured above for less than $50. If you’re not looking to spend the big bucks consider this one. 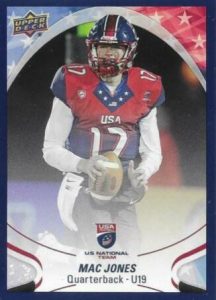 These cards are pretty hard to find as they are back from when Jones was on the USA football team. So as you may have guessed, these are the first Mac Jones cards ever. At the time, it was considered a future star watch card when he played in the under nineteen All-American game. And boy did that prediction come true! Well, as you can imagine this card has only skyrocketed in popularity since then. And in value!

Just like the Pro-Set collection, some of the cards are approaching $1,000 while others are still available for less than $100. As far as style goes, the red, white, and blue make this card one of the best Mac Jones rookie card budget options we’ve seen thus far. Definitely rare, but if you find one it’s well worth investing in. 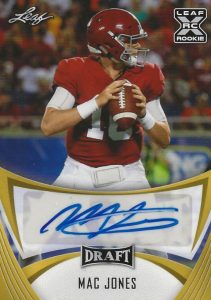 Whether you opt to go for the regular ole’ Leaf Draft or its fancy brother Leaf Metal, there’s a lot to like here. As the name suggests, the collections focus on some of the most elite talent coming out of the most recent NFL draft. Safe to say Mac Jones fits that description. Metal is far more expensive in general but both collections have some great autographed cards that can’t command considerable value. 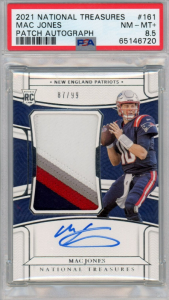 Now here’s a card that can do some damage at the auction house. This gem from National Treasures is capable of brining in not thousands but TENS of thousands. For instance, one of the /10 versions recently sold for north of $80,000. Meanwhile, some of the more common have no problem selling for more than $20,000. Either way you’re looking at a HEFTY investment.

We’ve all seen what this guy is capable of with a legendary coach at his side so you can imagine the tremendous upside here. While it was an up and down rookie season for Mac, he did a fine job at managing games and keeping his team on the right side of the win column. With a team like New England, a deeper playoff run is on the horizon if Jones can step up his game and be the difference maker. However, if he flops, there will be plenty of folks who are oh so quick to jump off the bandwagon. A true high risk/high reward play but if all goes well, your decision to pic up a few of the top Mac Jones rookie cards money can buy may pay off in a big way.

Follow the rest of the first year closely and if you like what you see don’t hesitate to hold out for even bigger gains. Sure an untimely injury or down second year could burn you, but guess what? There’s plenty of time to get it back. As long as Belichick is coaching, we like Jones’s chances of success.

While we’re certainly bullish, we’re not ready to consider something like this. Take your profits in the short or mid-term as the opportunity arises and if he’s still looking good after a few years consider buying back in with longer intentions.