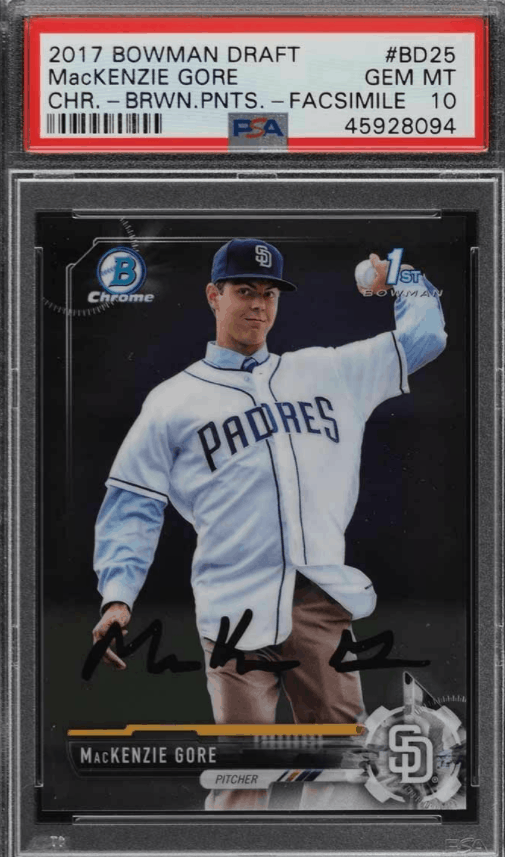 If you’re like us, you scooped a MacKenzie Gore rookie card or two in hopes for a 2020 big league debut. Although the great event never came to fruition, there was some speculation that the trade for Mike Clevinger may have given the game’s top pitching prospect an opening. But alas, it was not to be.

However, the fact that the debut was even a possibility in 2020 seems to suggest it’s all but certain Gore will be taking the mound for the Padres at some point in 2021. So, if you didn’t jump on a MacKenzie Gore rookie card last season, this offseason may be one of the best buying opportunities before he arrives in San Diego. Here are a few of his rookie card options that have caught our attention!

He was just draft this year and almost outranked MacKenzie Gore as a top prospect. Might be time to consider a Spencer Torkelson rookie card purchase! 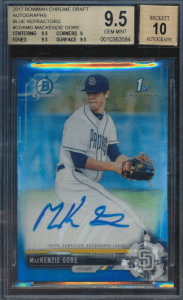 No surprises here. The industry’s top card for baseball prospects is THE card to target. This one features Gore in mid-delivery and ready to bring the heat.  If you’re looking to go conservative, pick up the standard-issue card. Feel like busting out the big bucks? There’s plenty of refractor and autograph options available. Right now the Blue and Redwave refractors are commanding some serious cheddar. 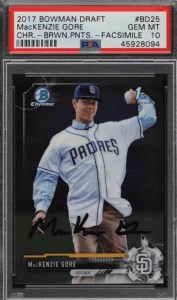 Take one look at those khakis and it’s clear where this card got its name from. Same set as the one we just covered but an entirely different photo. Apparently it was right after some sort of special event as Gore is rocking a blue button-up along with those brown pants. Some may think the card is a little cheesy, but the profit potential surely outweighs the aesthetics. 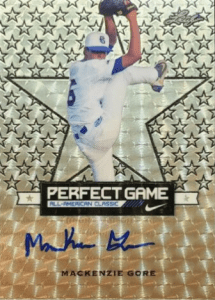 Our personal favorite out of the bunch. The card dates back further than even the Bowman Chrome. On top of that, the card is great too look at. Just look at that monster leg pump! There are a few options to choose from so just figure out what you want to spend and go from there. 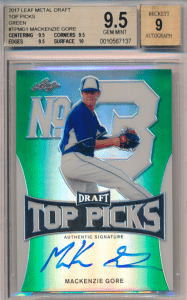 Another SICK MacKenzie Gore rookie card from Leaf. This one from the Leaf Draft collection. It’s an amazing set that also features two of the games top players in Ronald Acuna and Fernando Tatis Jr.  Safe to say if Gore makes a splash like those two guys did you’ll want to own this card. 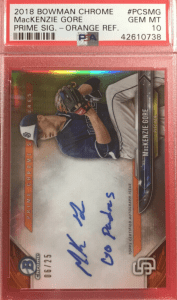 Another one from Bowman Chrome, this time from the 2018 set. A great option if you’re not ready to shell out the dollars for the 2017 version. This one features Gore as he’s about to release what was sure to be one FILTHY pitch. Grab an autograph and refactor tag if you want one of the more valuable options. 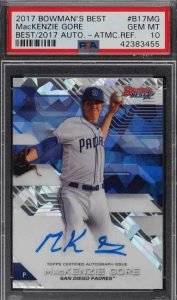 Plenty of great MacKenzie Gore rookie card options at an affordable price in the 2017 Bowman’s Best set. The card shown here is the /25 Atomic Refractor that includes gore’s autograph. Estimated value? Somewhere between $200 and $300. Hard to beat for a PSA 10 Auto Refractor. In addition to the Atomic, there are many other refractor options available in the lower $100s price range such as the Gold and Monochrome. If you can’t go with the 2017 Chrome, this may be the next best bet from Bowman. 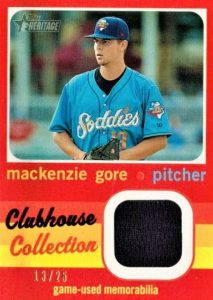 When it comes to prospect cards (that’s all we have right now since Gore is still waiting for the long-overdue phone call from the Padres GM) Topps isn’t in the same league as Bowman. And truth be told, sometimes Leaf and Panini even get the better of the ole’ stalwart of baseball card brands. For example, some of the rarest Topps prospect cards featuring Mackenzie Gore don’t even crack the $50 mark such as that 2020 Heritage shown above.

While value isn’t everything, it’s a shame to pull a rare card of one of the league’s top prospects out of that hobby box you just spent hundreds on only to find out it’s only worth around the price of an extra-large pizza. However, don’t worry – this list won’t be Topps-free for long. After Gore makes his pro debut Topps will certainly have some of the best true rookie card options with the classic RC logo in the corner. We can’t wait for the Topps Chrome true Mackenzie Gore rookie cards to hit the shelves! Once they do we’ll be sure to provide an update.

Given how it can often go with rookie pitchers, a ho-hum rookie season would not be a surprise. As far as strategy goes, you may want to consider selling after the highly probable initial pop once he receives the call-up. However, even if you don’t take profits on the call-up a mediocre debut season shouldn’t hurt your value too much. 9/10

It’s not easy being a top prospect.  Sometimes the pressure is too much or an untimely injury occurs. When such events happen, all too often a “can’t miss” prospect fades into obscurity. Just ask Kyle Drabek about that. However, for every Drabek, there’s a player that DOES meet expectations. In many cases all it takes is time. Remember when Max Sherzer couldn’t find the strike zone for a few years after getting the call-up? Same with Lucas Giolito. One is now a sure-fire Hall of Famer and the other seems to be an emerging ace. Risky but could pay off BIG. 7/10.

Given his minor league dominance and arsenal of pitches, we can’t help but think MacKenzie Gore could someday be one of the game’s pitching elites. That said, we’re not putting long-term money on it. See what happens within the next 12 months and make a decision with the new information you’ve gleaned.