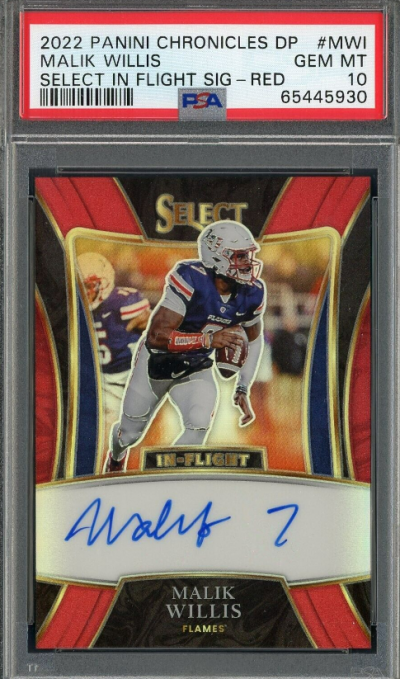 While the 2022 NFL Draft class doesn’t have nearly the amount of QB talent as previous years, one option you’ll want to consider is adding a few of the best Malik Willis rookie cards to your collection. Many pundits believe he’s the most talented QB of the 2022 rookie class due to his ability to avoid tackles and his powerful arm strength. Something we saw plenty of when Malik lit up the highlight reels in his final pre-season game. And if the scouting reports prove true, there is plenty to be excited about. Even if it may take some time to hone those skills into becoming an effective NFL threat.

We’ll go ahead and start with the very first Malik Willis rookie cards to hit the market and will be sure to keep you updated as the newer releases start to become available. Now let’s take a gander at what’s out there!

Question of the Day: Will Malik Willis have a better NFL debut than former top pick Trevor Lawrence? 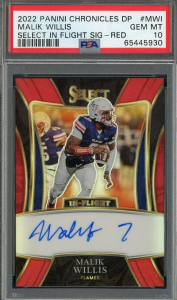 The first big collection from Panini that features the new crop of rookies is something that shouldn’t be ignored. For starters, Chronicles offers a sample of Panini’s top brands making it an amazing preview of what’s in store for 2023. Additionally, you’ll find a wide array of autograph, Prizms, and stunning inserts. At the end of the day, it’s one of the best collections to snag a some of the best Malik Willis rookie cards featuring the rookie QB in his college garb. 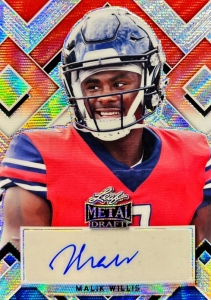 It’s not everyday you can scoop up a rare autographed rookie card for just a few hundred bucks. However, that’s exactly what Leaf Metal offers. A beautiful collection of cards with plenty of rare parallels featuring Willis’ signature. While such a combo usually warrants a heft price tag, you won’t find that here. For instance, the card above has a print run of just seven and should be available for less than $300. Additionally, there are plenty of other great autographed parallels that are even easier on the wallet. A no-brainer for our Top 5 Malik Willis Rookie Cards list. 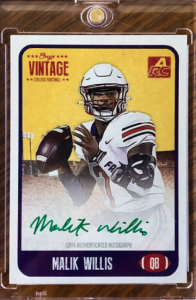 Onyx has done a great job of getting the drop on the hottest football rookie cards when it comes to players who have yet to be drafted. As you can see in the photo, the uniform is generic and does not pack the punch of those that will show his pro attire. However, that’s the ONLY thing generic about this card. The style is something you don’t see everyday in the world of football card collecting. A true throw back with a simple vintage looks to harkens to you’re favorite football cards of the 1970s. As you can see, the card is available with an autograph. One that could show up in a variety of different colors of ink to boot! So far these are holding similar values to the Pro Set collection we’re about to talk about next. 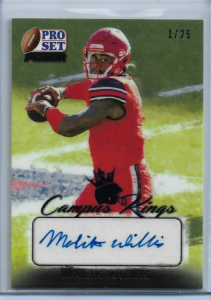 Just like before the 2021 season, Leaf’s recently relaunched Pro Set collection is leading the way when it comes to the early 2022 rookie card market. And we don’t know about you, but we’re a BIG fan of it’s jaw-dropping Malik Willis cards. Just take one look at that all turf back ground and you won’t need Hank Williams Jr. to tell you you’re ready for some football. You’ll instantly know it. In addition to the captivating background, the card features Willis as he’s about to show off the arm on what looks to be an out route. And let’s not forget the autograph! As far as value goes, some of the best Malik Willis rookie cards from the set have already sold for over $300. 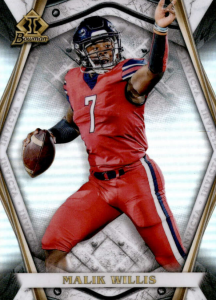 Let’s face it, Bowman is not a name you’d expect to hear when talking about football cards. That said, the baseball card giant is certainly putting it’s best foot forward with it’s 2021 Bowman University collection. Many of the cards from the set look just like you’d expect one of Bowman’s top prospect cards to look like out of its Chrome lineup. Which is fitting seeing how the set features players in their pre-NFL years. And just like in Bowman Baseball, you’ll see plenty of refractors and inserts. When it comes to value these cards are nowhere near what their fully licensed baseball cards are but that doesn’t mean they don’t make a great jumping off point for anyone looking to dabble on the cheap!

Rookie of the Year Alert: Check out these too-hot-to-handle Kenny Pickett rookie cards!

Up Next: 2022 Panini Prizm Draft Picks

An exciting array of players wearing their college uniforms. Look for both vets and rookies alike in the 2022 Panini Prizm Draft Picks collection!