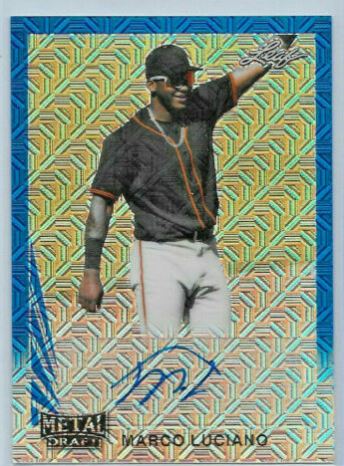 There’s certainly a case to be made for picking up a Marco Luciano rookie card or two before the 2021 season gets underway. For starters, he is now generally viewed by many as the top shortstop prospect in the game who’s not named Wander Franco or CJ Abrams. Very nice company to keep. Secondly, Marco Luciano appears driven to improve on a 2019 debut season where he smacked 10 home runs and hit .302 in only 47 games. Needless to say, any improvement over that impressive stat line will certainly turn some heads.

As far as how many Marco Luciano rookie cards are available, it’s not many. At age 19 he’s only had one year in the minors and isn’t expected to make his MLB debut until 2022. Which gives us plenty of time to add a couple of cards here and there on the way to his big league call-up! Now let’s check out what’s out there. 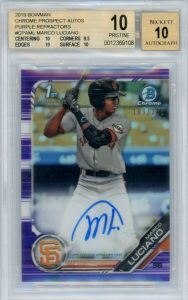 As we normally do, we’ll start with the BEST option. The card features Marco in the batter’s box looking for a good pitch to hit. And perhaps pondering how he plans on adding some much-needed pounds to that lanky frame! At any rate, this card is one of the gems of the 2019 Chrome set with some like the Gold Shimmer Auto selling for $7,000. WOW. If you don’t have thousands upon thousands to throw at a Marco Luciano rookie card, consider finding one without an autograph as there’s plenty out there for just a couple of hundred bucks. By the way, what an autograph it is! Is he secretly sponsored by the Golden Arches of McDonald’s? 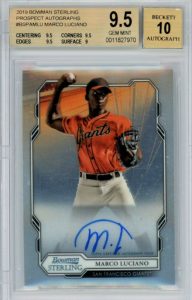 However, if you just gotta have that glorious autograph at the bottom of your card, you might want to consider a Bowman Sterling. In general, these will set you back far less than a Bowman Chrome with many autographed options available for less than $100. Done deal. 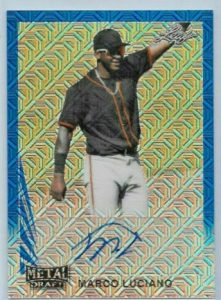 While Leaf isn’t known for making the most valuable cards, they sure do know how to bring the cool factor. Just take one look at the card above and try to tell us those Bowmans can hold a candle to it in terms of style. Not happening! As we said, these aren’t the most expensive cards on the planet so you’ll need to seek out rare cards that include an autograph for a decent investment. For example, the card above has a print run of just ten and includes Marco’s signature. Selling price? Right around $40.

Question of the day: Will Marco Luciano or Bobby Witt Jr. be the first to arrive in the MLB?

Another year facing minor league pitching will be good for the player and good for your investment. Let him beat up on Eastern League pitching for a season to gain the confidence he needs to propel him to Major League Baseball. And propel your Marco Luciano to new heights. Of course, he’ll need to perform for both to happen. We think that’s likely. 8/10

This may even be a better outlook than a short-term strategy. As long as he performs in 2021, you’ll likely see increased gains by holding into 2022 for the news of his call-up. By that time whatever you would have made from selling after the 2021 season should be dwarfed by the profits you’ll be raking on news of his MLB debut. 8.5/10

There’s much more risk involved with this strategy as you’re banking on Marco handling National League pitchers in the same way he did his minor league foes. The rewards could be outstanding but the risk is incredibly high. 6/10