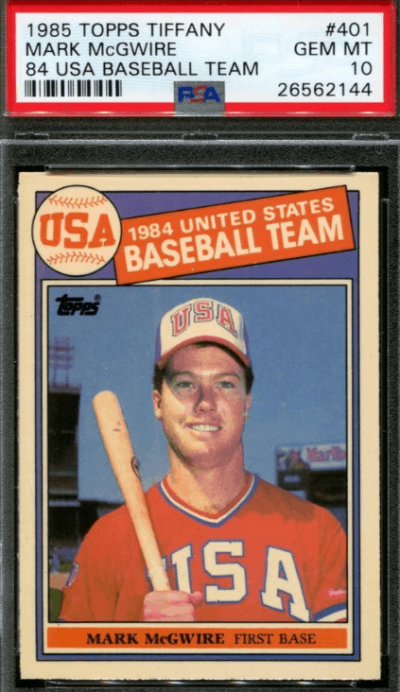 Looking to pick up one of the most valuable Mark McGwire cards?  That may be a good idea because, when it comes to hitting home runs, NOBODY did it better than Mark McGwire.  And that’s not an opinion either.  Thanks to the stat geeks, we can objectively PROVE that Mark is the best long ball hitter of all time.  How you ask??  The home run to at-bat ratio, of course!

With a home run every 10.61 at-bats, nobody in the game has ever hit them at a greater clip.  What does this mean?  For starters, it means you can now be the smartest guy in the room when this debate arises with your pals (just try not to make them cry).  But more importantly, it suggests that the top Mark McGwire rookie cards will hold value for a long time to come.  Even with the poor reviews of the new ESPN documentary featuring the McGwire and Sosa’s home run chase!

That said, you may be wondering which ones are good for your collection.  Like with many other things, the answer to this question likely starts with how much you’ll need to spend.  So let’s take a minute to go over some options. 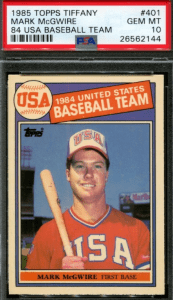 We’ll start with a card that at one point reached some very serious values.  How serious?  Let’s just say that you would have been staring a 5 digit purchase in the face for a grade 10 just a couple of years back.  While values have dropped the card just still bring in more than $1,000 in the right condition in 2023. Making for a PERFECT buy low opportunity. Either way, it’s the most valuable Mark McGwire card out there. 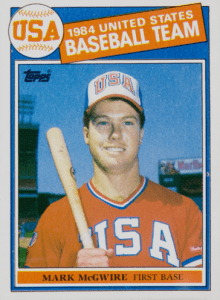 Okay, so you’re giving up the gloss and sleek finish that come with the Topps Tiffany.  But do you know what you’ll save?  LOTS OF MONEY (at least when buying it).  However, the regular ole’ Topps version of this card is still nothing to laugh at. 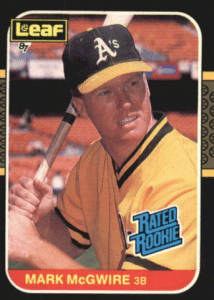 Just like the Barry Bonds Topps vs. O-Pee-Chee rookie cards, the 1987 Mark McGwire Leaf card is more valuable than its American counterpart.  And there’s a simple reason for that.  SUPPLY.  Simply put, there’s far fewer Leaf version of this card than Donruss (the American version).  As far as value goes, a 10 grade Leaf has brought in over $700 in 2023 while the same grade Donruss will command far less. 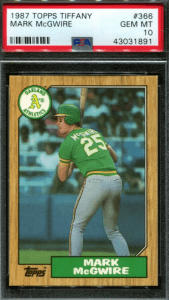 Right now, this card and the 1987 Leaf are running neck and neck in terms of how much they’re being sold (or bought) for.  The reason for the high prices again has to do with supply.  As we discussed earlier, the “Tiffany” Topps cards are far less common.  If you happen to come across this rare card in a grade 10, be prepared to spend between $500 – $1,000. Without a doubt one of the most valuable Mark McGwire cards in existence. 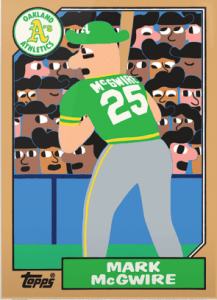 A modern-day spoof on the iconic 1987 Topps rookie card we just talked about.  The card features what appears to be a cartoon version of Big Mac in the same stance as the original (although he looks more like a giant thumb than anything else).  So if something like this is your bag, you can get one for around $500. 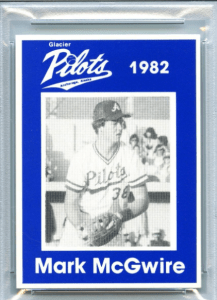 Now we’re going way, WAY back.  Back to the days when a young Big Mac spent his summer playing baseball in Anchorage Alaska.  You gotta wonder how the kid got any sleep with 19.5 hours of sunlight per day (hopefully he had one of those eye mask things for sleep).  At any rate, this card is pretty cool.  It features a black and white photo of a nonchalant Mark that’s surrounded by a blue and white border. 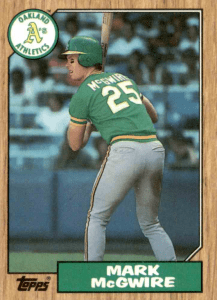 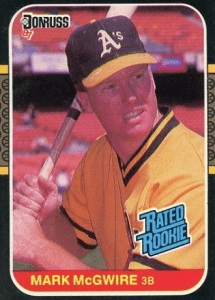 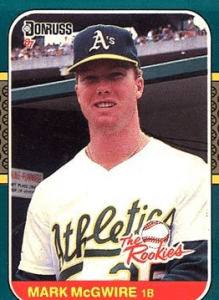 There are three Mark McGwire rookie cards that fall into this category.  First is the iconic Topps card that we briefly touched on with the “Tiffany” and “Project 2020” versions.  Additionally, there’s the Donruss card that we also mentioned when talking about 1987 Leaf Mark McGwire rookie card.  But there’s also a hidden gem!  The 1987 Donruss “Rookies” Mark McGwire card.  The style is the same as the regular Donruss but the photo shows a seemingly confused Big Mac staring into the camera while the regular card features a batting pose.  At the end of the day, each of these “low risk” cards will only set you back a few hundred bucks for a grade 10.

Is this young slugger another Big Mac in the makings?

A few Zac Veen rookie cards for your consideration.

It appears there was a definite “pop” in the Mark McGwire rookie card market leading up to the ESPN documentary we talked about in the opening.  While values have dropped nalong with the rest of the market in recent years, we believe this is an amazing buying opportunity. Long term, the most valuable Mark McGwire cards recover their value with the best of them.  Which makes sense considering there’s never been a better home run hitter to step to the plate!