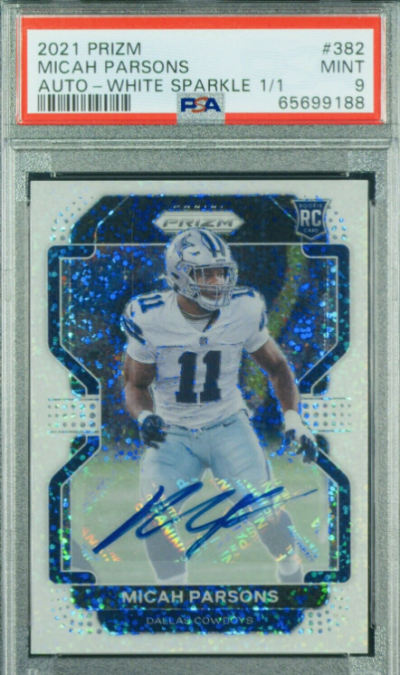 With him running away with the NFL Defensive Rookie of the Year award in 2021, it’s no wonder that collectors are showing up in droves to get their hands on the best Micah Parsons rookie cards. So far in his rookie season the Cowboys star rookie linebacker has been absolutely crushing it. How so? To start with, he’s among the lead leaders in both sacks and tackles for a loss. On top of that, Parsons has done a great job and stuffing gaps and making impact tackles all season long. so as you can see, the hype is real. But it was long before his NFL rookie season that Parsons started to turn some heads.

Parsons, a linebacker out of Penn State, was one of the first defensive players off the board in the 2021 NFL Draft and the 12th player overall. This is no surprise as Parsons certainly made his presence felt during his time in college. In 2018, he had 82 tackles, 1.5 sacks, and 2 forced fumbles to start his NCAA career. Then in 2019, the hard-hitting linebacker broke out in a big way with 109 total tackles, 5 sacks, and 4 forced fumbles. Parsons also ranked 10th in the Big Ten with 14 tackles for loss.

But the numbers alone don’t get you drafted 12th overall. Micah Parsons had some MONSTER games in which he showed the world that he had “Future NFL Star” written all over him. In a game against Michigan on October 19th, 2019, Parsons had a whopping 14 tackles to help Penn State subdue Michigan in a 28-21 victory. One week later, Parsons would have a game-high 12 tackles and lead the Nittany Lions to a 28-7 win against Michigan State. And while these performances turned some heads, his best statistical game may have been the last one he ever played in college. In the 2019 Cotton Bowl against Memphis, Parsons had 14 tackles, 2 sacks, and 2 forced fumbles to help Penn St. seal a 53-39 victory. Talk about an exit strategy!

In hind sight the writing was on the wall all along when it comes to Parsons NFL success. However, few could have seen it developing so quickly. While already an elite talent, another power house season could solidify Parsons as not only the best linebacker but the best defensive player in the league PERIOD. Meaning it may be a good time to scoop up one of the following red hot Micah Parsons rookie cards.

Now that he has become acclimated to life in the NFL, many collectors are picking up the top Micah Parsons rookie cards in hopes he delivers the same impact for the Dallas Cowboys. While there aren’t many options out there yet, here are a few that should do quite well as long as Parsons does! 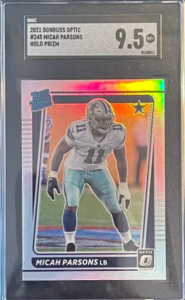 A true rival to Panini Prizm, Donruss Optic has become one of the most popular Micah Parsons rookie cards. And why wouldn’t it be? Just take a look at the card above and try to tell us it doesn’t scream BUY NOW.

Anyways, just like Prizm the set offers a wide variety of cards from all across the price spectrum. While not as valuable as Panini Prizm overall, you’ll have no problem finding something to drop some big money into. On the other hand, casual investors can easily find something here that’ll fit their budget. Either way, you’re in good shape. 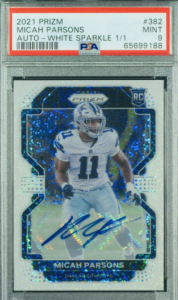 This is the first stop if you’re serious about adding one of the best Micah Parsons rookie cards to your collection. Not only does 2021 Panini Prizm offer a wide variety of Prizms, but it also has a tremendous selection of the league’s top rookies. Needless to say, Micah Parsons is one of them.

At any rate, its the most popular collection among hobbyists who have a good amount of cash to sink into their investment. Meanwhile, there are plenty of moderate to casual cards to collect when it comes to prices. Just take a minute to decide what you’re willing to spend and go from there. 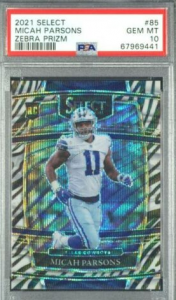 Another collection that folks have been patiently waiting on. Panini Select offers one of the finest football cards known to man and it’s latest collection lives up to its reputation. As far as Micah Parson cards go, there are plenty of great parallels to dig into such as the Zebra Prism shown here.

While it’s always nice to buy a card with a high grade, Select is also a great set to take a chance on as far as ungraded cards go. 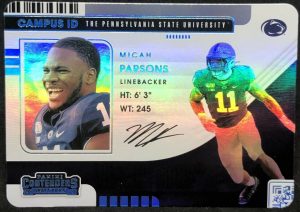 The base card has the logo “DRAFT CLASS” which stands out quite prominently on the far right of the card at a vertical angle. Additionally, Micah Parsons is portrayed looking as if he is in the midst of making a lateral move for another one of his many tackles that we talked about earlier. One of our favorite parallels is the Red Cracked Ice version that sells for less than $50. Meanwhile, our favorite Micah Parsons rookie card insert from this collection is the Campus ID card shown above. 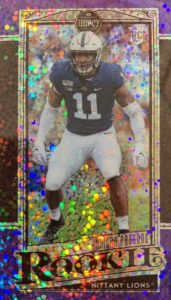 The Amethyst Mini variation shown here screams prominence as soon as you look at it. Golden glitter can be seen all over this card, especially around the jazzy little “Rookie” logo at the bottom. Micah Parsons is shown standing in his natural position in the defensive backfield waiting for an offensive play to start. $50 should get the job done if you’re hoping to pick one up. Easily one of the best Micah Parsons rookie cards showcasing his college days. 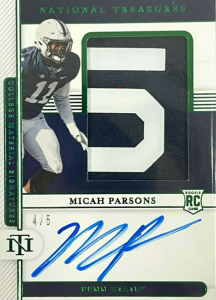 If you’re looking to spend the big bucks one of your first stops should be National Treasures. While the main set is still yet to be releases, the Collegiate versions is now on the shelves and is generating some very valuable Micah Parsons rookie cards. For instance, the card above recently sold for nearly $600. Sound like a lot? Take into consideration that the card comes with Parson’s autograph and has a print run of just 5. Suddenly, $600 for a rare autographed rookie card of a guy who could very well become a defensive stalwart over the next decade seems very reasonable. 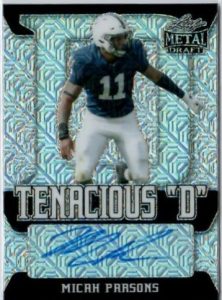 This card stands out as soon as you look at it. The card has a silver background and includes the bold “Tenacious D” statement across the bottom portion. Even better than that is Parsons’ autograph just below. Meanwhile, Parsons is shown in what appears to be a moment where he’s using his top-notch football instincts to decipher how the play is going to develop. Leaf Metal Draft is known for offering great value on autographed rookie cards and this set is no different.

Up Next: Don’t forget to check out our Kyle Pitts Rookie Card First Look!