Michael Kopech seems poised to break onto the scene in a BIG way.  Or maybe since he throws 105 MPH, breaking onto the scene in a FAST way is more like it.  Either way, he’s coming and the strike out’s are going to start piling up. Quickly.  That said, you may want to begin piling up some of his rookie cards!  Here’s 5 that need to be on your radar ASAP.

Michael Kopech Rookie Cards to Target Today (and beyond) 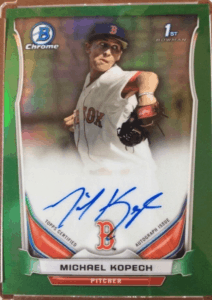 Released when Michael was still in the Red Sox organization, the 2014 Bowman Chrome comes in a variety of styles.  Prices vary based on whether it has an autograph or refractor tag.  If you’re looking to bet big, make sure you have at least one of the two features on your card! 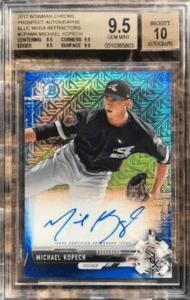 Another Bowman released before Michael made his big league debut in 2019.  The card features the young fireballer’s smooth follow-through.  And just like the 2014 version, it can be had with an autograph and/or refractor tag. 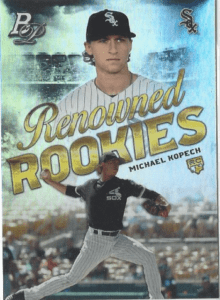 Yet another prospect card we have lofty expectations for.  Almost as lofty as Kopech’s aspirations for a 107 mph fastball!  There’s a lot going on with this card, but if you can get past the loud appearance, your screams of joy while profit-taking may be even louder. 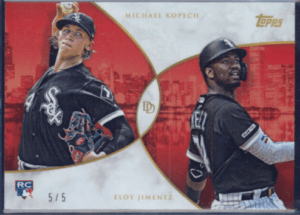 Why not take a chance on a card that pairs Kopech with fellow White Sox phenom Eloy Jiminez?  There’s a lot worse ideas, that’s for sure (the perm craze of the early 90’s comes to mind).   Anyways, if things go as planned for these guys you’ll be twice as happy. 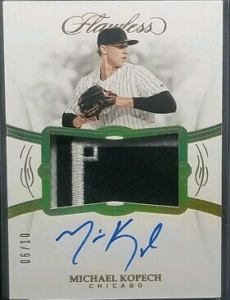 Because it’s always nice to have a piece of torn off jersey molded to your card.

Rather invest in a slugger?  Check out these Rafael Devers rookie cards!

If Kopech can harness that wicked fastball and hone in on his control, WATCH OUT.  On the other hand, any pitcher who dials the heat up like may be destined for a trip to the disabled list or two.  When it comes down to it you’re betting on the kid’s health because the TALENT IS REAL.  Here’s to you making the right choice!

Investment Rating Score Card: 6 out of 10 (high risk but an even higher reward).

Something was wrong! Try to remove the widget and re-add again.

Get our latest news straight into your inbox.